LIKE no other drought before it, this drought is changing the way sheep breeders and fatteners run their enterprises, with the lot-feeding of lambs and pen-feeding of adult sheep playing a crucial part in keeping some enterprises afloat. 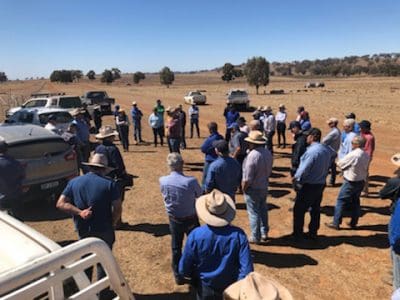 The Wellington workshop, one of 13 hosted by Local Land Services NSW in recent weeks.

Both strategies are being used to value-add grain and fodder, and to ensure livestock carry all the weight their target markets will allow in this time of record high sheepmeat prices.

They are also part of a growing realisation that drought-affected pastures should be rested when possible to ensure they can accommodate lambing ewes when needed.

While lot-feeding appears to be a short-term strategy for most, confinement or containment pens in which to drought-feed ewes, wethers and lambs are showing signs of becoming a “must-have” for every sheep operation.

Mr Duddy has recently presented as part of a series of 13 containment-feeding information days for NSW Local Land Services.

Spread from Walgett in the north-west to Cooma in the south-east, and winding up with Mullengandra this week, they have attracted on average about 30 attendees at each workshop.

With 99.4 per cent of NSW in a drought-declared category, Mr Duddy said sheep producers everywhere were looking to get through what looked like being another dry period.

“It’s just desperate,” Mr Duddy said, saying that even pockets of the tablelands that have some groundcover needed to engage drought-feeding strategies.

“People with sheep have been full-time feeding for a year or two, and now they’re down to bare bones on stock numbers, so they are all about managing their groundcover, and maintaining that pasture base.”

“That’s where pens come in; a lot of people have been using them through necessity, and are using the pens to push up nutrition too.”

The information days have looked at what should and should not be done when building and using pens, and have covered design, management, nutrition and animal health.

Mr Duddy said he believed pens were ideal for joining and holding pregnant ewes as well as dry sheep, but should only be used for lambing singles if paddock lambing was not an option.

“We’re not fans of lambing in pens, and we’re certainly not wanting to see twins being born in the them.

He said a safe and suitable ration which included sufficient roughage right through from starter to finishing to reduce the risk of acidosis was a key part of the operation.

“With the fodder, we have seen a lot of canola and cereal crops cut for hay, which has taken a lot of pressure off in terms of sourcing fibre throughout the eastern states.”

“In the short term, roughage should be reasonably priced and available.

Mr Duddy warned of the risk of dangerous nitrate levels in hay.

“It pays to get that hay tested.”

”Access to grain and  pellets may be a little more difficult due to the limited number of crops having made it to harvest.”

Mr Duddy said confinement pens stacked up as a means of ensuring producers got the most from their ewes in the long-term, but lot-feeding lambs was not an assured money-maker.

“I’ve been crunching the numbers for 15 years on this, and 65 per cent of the cost of lot-feeding a lamb is buying that lamb.”

“The numbers are still tight, and if you’re a breeder, you’re probably better off to concentrate on what you do best – breed, get live lambs on the ground and, if the season is against you, sell your lambs as stores to someone else to finish.”

“There is a huge financial penalty incurred when we start degrading pastures and lose valuable topsoil and nutrients. It’s important during drought that we protect these assets and the country is able to quickly respond once the drought breaks,” Mr Lieschke said.

“Stock should be removed from pastures once groundcover declines to 70 per cent.

Mr Lieschke said graziers were now planning fodder budgets out to autumn, and over a four to six-month feeding period the economics were looking more favourable for sheep-based enterprises.

“Because of the strength of wool, lamb and mutton prices at the moment sheep — especially self-replacing Merino flocks — can cover that length of feeding to a much greater degree than cattle.”

Financial returns of different enterprises can be examined by downloading a gross-margin budget available from the NSW Department of Primary Industries and adjusting the feeding cost. 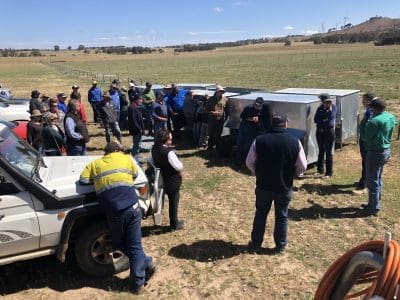 Mr Lieschke said this round of workshops on containment pens attracted more interest and better attendance than the series held last year.

“Because we’ve been through one summer already without much groundcover, I think it’s a bit more front-of-mind.”

Mr Lieschke said his family’s own sheep operation had built pens near the shearing shed, and found they had a range of uses apart from drought-feeding.

“They’re handy to have at shearing time as an extra set of holding yards, and to put rams into during the year.”

Delta Ag Wagga Wagga animal-health merchandiser Craig Jones said branch discussions identified the topic as one of interest to its client base.

“It certainly was,” Mr Jones said.

Mr Jones said producers were interested in pen-feeding sheep to help them better manage their farms in dry times.

“A lot of people are going down that road to give paddocks a spell, and anyone with sheep seems to be interested in it.”

Along with hay, Mr Jones said barley was the obvious on-farm input to put through sheep.

“For the protein and energy you can get out of it for sheep, compared with what it’s worth at the moment, it’s in that sweetspot.

“You’re converting it into good money.”

Canola meal, corn, lupins and pellets have also been used by some in the district to feed to sheep and lambs, where Mr Jones said pen or lot-feeding of sheep has been going on for up to three years.

Delta Ag Young general and animal-health merchandiser Steve Corbett said the branch hosted a Managing Pastures into 2020 information day to assist with decisions producers were now making about stock numbers and management based on their feed situation.

“We talked about transitioning sheep into containment areas, and managing them in there.”

Mr Corbett said he believed producers in the Young district were committed to hanging on to the sheep numbers they now have, and the turn-out of more than 80 attendees in the midst of hay-baling and the start of harvest was testament to that.

“People have culled to where they need to over the past 18 months, and now they want to maintain their core breeding stock.”

“This isn’t the first drought they’ve been through and it won’t be their last.

“They’re looking for ways to get through it without damaging their pastures, or losing condition on their animals.”

Boyd Metal Works principal Peter Boyd said the family’s Cowra business has done 18 lamb feedlot set-ups so far in the current drought, after getting into intensive feeding of lambs on the family farm at nearby Canimbla in 2006.

“As lamb prices get dearer, more intensive feeding becomes more worthwhile, and I think lot-feeding is where we’re going to go.”

“It adds another enterprise to your farm.”

Boyd feedlot systems have been installed across NSW and into southern Queensland, and are a feature at the Mogal Plain Aggregation, where confinement pens have also been built to feed dry and joined ewes.

“You get some people that use feedlots to finish lambs, and others that trade lambs, or wethers and ewes, or a mixture of both.

“Others are graingrowers that want to value-add grain, and sheep are better converters than cattle.”

“A lot will start their feedlot on 2000 head, and then double to 4000 in 12 months once they feel confident with what they’re doing.”

Fletcher International Exports owner Roger Fletcher said his business used lot-feeding to ensure it can meet some market targets, and to even out throughput on the chain.

Mr Fletcher, whose main works is at Dubbo in central west NSW, said the region has been “an absolute disaster” because of drought.

He said lot-feeding sheep has helped his and other operations withstand the drought.

“They’re not the easiest things to run, but we do do some of it long-term.

“Lot-feeding lambs helps balance our kills, and when we’re doing a speciality lamb for certain markets, it helps us.”

However, Mr Fletcher believes widespread interest in lot-feeding will finish when the drought ends.

“We see those phases.”