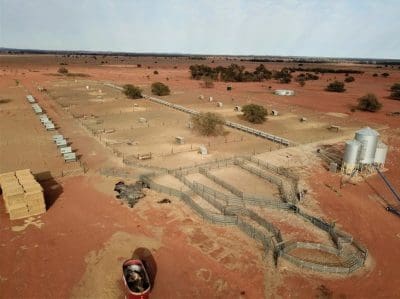 In addition to a 4000-head lamb feedlot, Mogal Plain has nine 600-head pens which were built this year to drought-feed ewes. Photo: Ray White Rural

AN EXTENSIVE capital-expenditure program has turned the Mogal Plain Aggregation at Tottenham in central New South Wales into a premier mixed-farming operation capable of feeding close to 10,000 sheep at a time.

And with the decision by Tony Kelly and Jo Eldridge to open the next chapter in their lives, the 10,965-hectare aggregation is on the market to offer a dryland asset with huge cropping potential, and a rare capacity to generate income in drought.

For sale via expressions of interest, the Mogal Plain Aggregation is already attracting strong interest, and had 36 millimetres of rain over the weekend to top up its 61 dams.

“Our lucerne is still going, and now that it’s rained, it will jump away and be good for the ewes we have left,” Ms Eldridge said.

Mogal Plain is Mr Kelly’s home property, and in the past decade, the vendors acquired Colbain to add scope to their operation.

They then switched from cattle to sheep, and converted their beef feedlot into one which can accommodate 4000 lambs per intake.

“We used to be all cattle…and we looked into sheep because there wasn’t enough cashflow with the cattle,” Mr Kelly said. 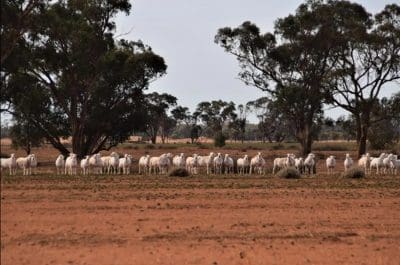 The Mogal Plain Aggregation has run up to 10,000 Australian White ewes which it has bred back from a Wiltipoll base, and lambs are finished in the 4000-head feedlot. Photo: Ray White Rural

When paddock feed has allowed, the vendors have put lambs into the feedlot at around 36-38 kilograms, but in the current drought phase, they have gone in at a minimum of around 25kg.

“We normally like to put them in for 60 days and go for a carcase weight of 32kg after we’ve put about 20kg on them,” Mr Kelly said.

The vendors were pen-feeding lambs on a lupin, barley and barley-straw ration with a Coprice protein pellet.

Supplementary hay, mostly from South Australia, has also been brought in when on-farm supplies ran out.

“In normal years, you don’t have to buy anything in.”

Mr Kelly and Ms Eldridge are among many mixed farmers in NSW who have relied on sheepmeat income alone to get through the drought.

“In an environment where you can’t guarantee your return based on what you grow in the paddock, the feedlot means you’re not selling store lambs, and we’ve been able to finish all our lambs through it.”

The vendors sell their lambs over the hooks to the best grid price they can find, which could take them to Gundagai, Junee or Tamworth, and they can also sell through the yards in Forbes or Dubbo, which are equidistant from Mogal Plain.

Drought-feeding pens, each measuring 100 metres by 30m and holding 600 ewes, can hold up to 5400 dry or pregnant ewes in total, and were constructed this year to further drought-proof the aggregation.

“We’ve got nine drought pens that we had all our ewes locked up in to get them off the paddocks, and we scanned them and sold most of them ahead of the sale,” Ms Eldridge said.

The aggregation has run up to 10,000 ewes, which the vendors bred back primarily using Australian White rams from Tattykeel stud at Oberon, where the breed was developed, over Wiltipoll ewes.

If the vendors decide to scale down to a smaller property, the 290 Australian White ewes they have retained may go with them, but are not being offered as part of the sale, which is being handled by Ray White Rural Dubbo agents Brian McAneney and Frank Power.

Mr McAneney said the property next door, which did not have the improvements of the Mogal Plain aggregation, sold this year for $1000/ha.

“I’d like to think what we have here would be above that,” Mr McAneney said.

“Its ability to breed and finish large-scale numbers, and to produce a solid proportion of the grain, sets this aggregation apart.”

“The amount of development work undertaken has to be seen to be believed.”

Mogal Plain covers 2460ha, and is located on flood-out country 48km south-west of Tottenham, and 95km north of Condobolin.

It is gently undulating to level highly fertile red-loam country, and is 95 per cent arable.

Mogal Plain has 14 main dams with extensive catchments, and laser-levelled channels distribute water from those with the best inflow. 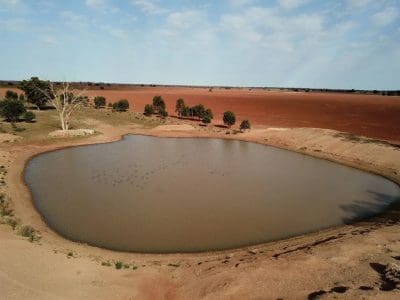 The system of harvesting the water run-off has underpinned the water security of Mogal Plain, and is also a feature of the 8505ha Colbain.

It has two unequipped bores and 47 dams, with one third of those built under current ownership, and benefits from overland flooding.

Mr Kelly said water has not limited the aggregation’s stocking capacity, but a lack of paddock feed for lambing encouraged them to sell their pregnant ewes to restockers.

“It was always our plan to sell and move away, but the drought has made us do it 18 months earlier.”

Mogal Plain has a renovated and spacious homestead with a saltwater pool and outdoor areas plus a cool room and butcher’s room.

In addition to the feedlot’s steel yards and the Boyd feeding system, Mogal Plain has a 2000 head-capacity set of steel sheep yards with an undercover concrete work area, plus a set of set of steel cattle yards which can handle 1500 head.

Colbain has more than 100km of new hinge-joint fencing, including steel end-assemblies and gateways, suitable for sheep or cattle.

Under current ownership Colbain has had 3717ha pulled, raked and burnt, and further to this, 1860ha has been identified for next season’s cropping program.

Accommodation on Colbain includes a cottage, a modern four-bedroom portable building with ensuites, and further contractor quarters, while the original homestead has power connected and renovation potential.

Natural timbers on the properties include wilga, belah, eucalyptus, cypress pine and box.

The aggregation can be purchased as a whole or separately, and expressions of interest close on 6 December.