GRAIN exports from NSW and Queensland have slowed to a trickle as the east coast domestic market comes to terms with rising feedgrain demand and shrinking supply, factors which are unlikely to abate before late 2018. 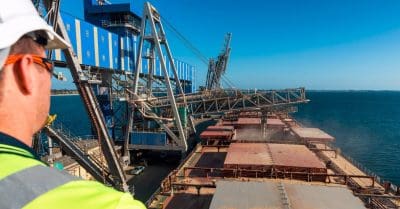 Major handler GrainCorp’s January-to-June shipping stem tells part of the story; it has no cereal cargoes out of NSW ports or Brisbane booked for export.

Low winter-crop yields in Queensland and the northern half of NSW have largely confined available eastern states’ export surpluses to Victorian port zones, where GrainCorp terminals’ cereals bookings include only 90,000 tonnes of barley and 345,000t of wheat between now and June.

This compares starkly with schedules at this time last year, when fresh port-and-logistics investments Australia-wide helped catapult more than 2 million tonnes (Mt) a month of cereals into export.

While feed consumers’ wheat prices have remained steady, barley and sorghum prices have taken off.

Industry sources have said high numbers of cattle on feed, and growers snubbing current bids in the belief that deteriorating conditions for pastures and summer crops can only drive up prices for their stored grain, have fuelled the rise in delivered markets.

“Sorghum’s burning up, with no rain in January to speak of,” igrain general manager strategy and development, Duncan Whittle said.

“The perception is the hot weather has taken the top out of the crop,“ commodity services provider Farmarco, principal, Rob Imray, said.

“Sorghum is moving, there’s no doubt about that, but wheat values somewhere in the $320s delivered Downs really have not moved materially this past couple of months,” Mr Imray said.

“Barley delivered Downs February has been trading in the high $320s, a few dollars over wheat.”

“With big numbers of cattle on feed, the stars have really aligned for barley; the market’s telling us barley’s what’s needed.”

Mr Imray said it would seem there was not enough barley available in the Queensland and northern NSW market to satisfy demand, and markets had and were adjusting accordingly.

“Not only does barley have to be drawn from the south, but also the market is pricing it in such a way that just the minimum requirement of barley will be used in rations and the rest will be supplied by other grains.”

GrainCorp yesterday issued its last weekly harvest report for the season. It adds a further dimension to the feedgrain picture.

GrainCorp receivals in NSW stand at 2.08Mt, well below Victorian receivals of 2.94Mt.

This compares with the last week of its bumper 2016/17 harvest intake figures, when NSW GrainCorp receivals totalled 6.57Mt and Victoria 3.74Mt.

Livestock feed in eastern Australia accounts for perhaps 250,000t per week of grain.

Wheat, as always, is the mainstay grain, for poultry, cattle, dairy and pig feeders.

As wet harvest weather emerged they remained wary of using badly weather-damaged or out of specification grain, which could present risks to animals’ performance or health.