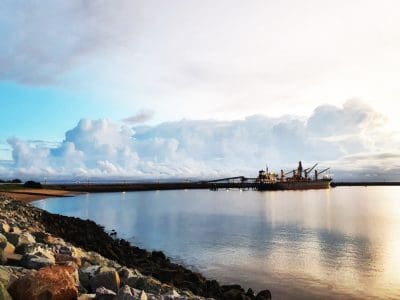 The Yangtze Flourish in Mackay prior to loading what the trade expects will be the last bulk chickpeas to Bangladesh for the current season. Photo: GrainCorp

AUSTRALIA shipped 56,502t of chickpeas in January, up 2 per cent from 55,296t exported in December, according to the latest export figures from the Australian Bureau of Statistics (ABS).

This is ahead of an expected slowdown in export sales as Bangladesh and Pakistan switch attention to the region’s rabi (winter) crop.

“We are heading towards our new-crop, with harvesting scheduled to start in mid-April,” Pakistan Pulses and Importers Association president Muhammad Ahmed said.

“The current situation of the crop is promising, and we are all set to produce a crop of 600,000 tonnes, which should be sufficient to fulfil our domestic requirement.

“However, the weather needs to be monitored for the next month or so, as last year also we had harsh weather during this time which reduced our crop size by 100,000-150,000t.”

Mr Ahmed said Pakistan had stopped buying imported chickpeas, as its domestic prices were expected to ease on supply-side pressure from its own new-crop.

In India’s absence, Bangladesh and Pakistan have been Australia’s two biggest chickpea markets.

While Pakistan is a containerised market, Bangladesh is a bulk one, and the market understands the last part-cargo for the season is now on its way to Chittagong.

It loaded late last month in the Queensland port of Mackay, before filling up in Adelaide with lentils, also bound for Bangladesh.

India has been well supplied by its 2019 rabi chickpea crop of close to 10 million tonnes (Mt), and has started harvesting this year’s crop which is forecast to total 11Mt.