Australian chickpea exports at 27,288t down 37pc over May

EXPORTS of Australian chickpeas in May totaled 27,288 tonnes, down 37pc from the April total of 43,134t, according to the latest data from the Australian Bureau of Statistics (ABS). 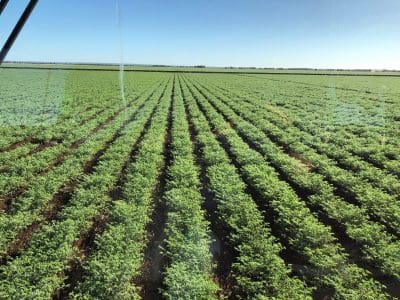 Most new-crop exports of chickpeas are likely to come from Central Queensland crops like this.

The drop reflects reduced tonnage shipped to Bangladesh, currently Australia’s biggest chickpea market in the continued absence of India, which is working its way through ample domestic old-crop and current-crop supplies.

Combined with some smaller markets, the demand from Bangladesh has been enough to support prices for Australian chickpeas at historically high levels of $650 per tonne or more in recent months.

Production prospects for Australia’s new-crop chickpeas are bright in Central Queensland, where the crop has been planted on time and into good subsoil moisture.

Chickpea area in northwest New South Wales and southern Queensland has been limited by very dry conditions, and with no rain on the forecast for the coming week, the planting window for Australia’s 2019 has all but closed.

This will limit the potential for bulk new-crop exports out of Brisbane and Newcastle, but shipments out of Central Queensland ports are likely, as are containerised shipments from all ports.