CHINA and South Korea were the biggest volume buyers of Australian wheat in the boxed and bulk markets respectively, according to the latest export data from the Australian Bureau of Statistics (ABS). 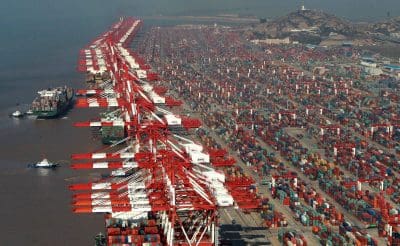 The Port of Shanghai is a hub for China’s containerised trade.

In the boxed market, China took 44,153 tonnes, almost double the amount shipped in July, with Vietnam on 11,257t the second-biggest boxed market for August, and The Philippines on 9735t in third place.

Bulk shipments for August saw a resurgence in tonnage shipped to Indonesia, which was the second-biggest bulk market for the month with 83,055t, back to a level last seen in May, when it purchased, 85,450t.

The biggest bulk tonnage shipped in August was to South Korea, which took 91,100t, while The Philippines with 61,796t was the third-biggest bulk market for August.

On the import side, shipments of Canadian wheat from Vancouver to Port Kembla keep coming, with the La Luna due to berth in coming days, and the Santa Ines booked to bring the next load.

Canadian wheat is being imported by Manildra Group to supply its Shoalhaven Starches plant at Bomaderry because high-protein domestic wheat in large amounts has become very difficult to procure in the current drought.