AUSTRALIA shipped 72,207 tonnes of canola in August, with China and Japan the volume customers, according to the latest export data from the Australian Bureau of Statistics (ABS). 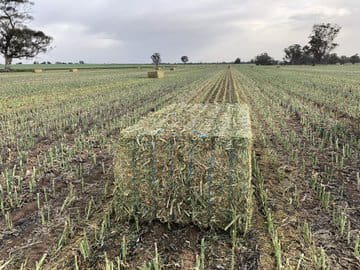 This canola crop at Lockhart in southern NSW is one of many to be cut for hay for sale recently. Photo: Mark Taylor, Taylor Grains

The August tonnage is up 86 per cent on the July figure of 38,757t, and is the largest amount shipped since April, when 88,784t was exported.

Shipping stems indicate 30,000t of canola now loading in Portland, Victoria and bound for China will be the last current-crop cargo prior to new-crop shipments starting in December.

According to the most recent ABARES Australian Crop Report released last month, national canola production from the harvest now under way is forecast at 2.3 million tonnes (Mt), up 6pc on last year but 29pc below the 10-year average to 2018/19.

Industry sources have said this figure had considerable downside, as dry spring weather in most areas and a deficit in fodder because of drought had encouraged many growers to cut crops with limited yield prospects for hay.

A modest reduction in Victoria is likely, and significant cuts are expected in other states.

The Grain Industry Association of WA last month cut its canola production estimate to 792,000t, down 22pc from its August figure.