AUSTRALIAN shipments of canola from its 2018 crop got off to a flying start in November with cargoes bound for crushers in Belgium and Germany providing the bulk of the 155,013 tonnes shipped, according to the latest export data from the Australian Bureau of Statistics (ABS).

“Their demand for imports was strong, and they have been able to take advantage of the Australian harvest in October-November to bolster their supplies,” Mr Goddard said.

“At this early stage, the expectation is that the 2019 EU crop may also be down on historical levels, and possibly at a decade low of around 20 million tonnes (Mt).” 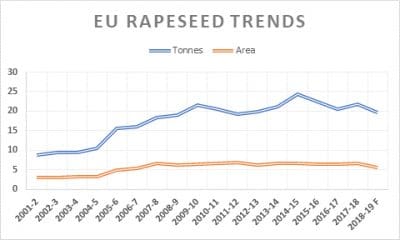 This expectation, and resulting firmness in prices, has encouraged farmers in  Ukraine and other former Soviet countries, to increase their plantings, which will not be harvested until the European summer.

“I think we can expect the EU to continue to be the strong market it is for Australia pretty much until its domestic stocks are exhausted.”

Mr Goddard said firm bids from the EU have given Australian traders little incentive to compete with Canada in some Asian markets.

“Having said that, it is pleasing to see ongoing container trade into markets such as Vietnam, Nepal and Malaysia.”

The most recent AOF forecast pegged Australian canola production at 1.96Mt, the lowest in 10 years, with Western Australia alone expected to produce 1.42Mt.

Australia typically uses around 1Mt of seed for its domestic crush centred in New South Wales and Victoria, and has already sourced South Australian and Western Australian new-crop seed to bolster its intrastate supplies.

The closure last year of Cargill’s cottonseed-crushing plant at Narrabri means canola meal in eastern Australia has met increased demand, and the ongoing drought in NSW particularly could boost domestic consumption from the stockfeed sector.