A SUCCESSION of bulk cargoes coupled with modest ongoing container trade has reduced spot demand for Australia’s main winter-grown pulses, with values for faba beans and lentils dropping $10-$50 per tonne in the past month. 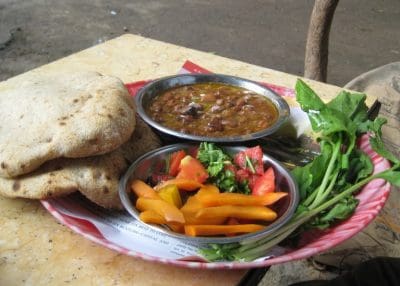 Faba beans are popular in the Egyptian diet in dishes like ful medames. Photo: Zachbe at en.Wikipedia

Bulk vessels carrying chickpeas, faba beans and lentils have all left Australian ports in recent weeks to end the major accumulation phase for exports in the current crop year.

In new-crop trading, the mungbean market remains active ahead of the Queensland harvest which will start in earnest in May, and the new-crop chickpea market is also gaining momentum as hopes build for a widespread planting.

Last year’s chickpeas are offered at $850/t DCT offer, unchanged from last month, but only small amounts are thought to be left in grower and trader hands.

“Old-crop is done and dusted, and the last vessel has gone,” GrainTrend director Sanjiv Dubey.

“You can’t get any buyers, because we are so close now to the harvest in Pakistan and India, where the harvest will start in a big way in the second half of this month.”

Mr Dubey said new-crop chickpeas for October-November delivery to up-country packers have been trading at around $620-$650/t, or $675-$680/t DCT, in a market which has sprung to life in the past two weeks.

“The liquidity is coming from the grower, and with the lower Aussie dollar, the prices for new-crop Australian chickpeas are becoming attractive to overseas buyers.”

Growers in Queensland and New South Wales are now turning their attention to planting chickpeas from late April until June.

“Everything has changed positively now that rain has brought about intentions to plant a winter crop.

“What I hear is there will be a trend to plant more cereals because farmers want the stubble, but we will see closer to planting.”

India is expected to remain closed to Australian exports as it chews through its carryover and the crop now being harvested which is estimated to total 11 million tonnes, up 1Mt on the crop it harvested last year.

Pakistan’s crop at 600,000t is expected to be enough to cover its domestic requirements, which means the Bangladeshi market is likely to be the volume buyer of Australia’s new-crop chickpeas.

Factors include currency, COVID-19’s impact on shipping, consumption due to heavy arrivals, and poorer quality product from the United Kingdom and Baltic States crop.

“Aussie growers have done a good job of holding up the market during the harvest period, but I think a big chunk of fabas have now been sold, especially after prices eased,” Mr Dodson said.

It has already taken one bulk cargo from Australia, and the second has just finished loading.

“Liquidity gets less when Egypt takes a spell out of the market because it has product arriving, and that’s what’s happening now.”

Egypt is expected to continue purchasing containerised faba beans prior to the UK and the Baltic States harvesting its new crop in September and October, providing our prices remain competitive compared to other origins.

The latest bulk shipment of Australian lentils is on its way to Bangladesh, and while the container trade continues to tick over, volume accumulation does not appear to be occurring.

Australia Wimpak general manager James French said growers in Victoria were now switching their attention to the planting of this year’s lentil crop which will start next month.

“There are still a lot of old-crop lentils around, and there’s not a lot of interest in new-crop lentils,” Mr French said.

“Growers appear to be happy where they sit at the moment in terms of sales, and they’ll be happy to sit back until after sowing before they sell any more old-crop.”

The smaller Nipper variety is preferred by Bangladeshi buyers, provided its premium to the larger Jumbo and Nugget varieties does not get too big.

Mr Dodson said Canadian Crimson lentils, which compete with Jumbo and Nugget varieties, have been priced aggressively, and are making their way into Middle East and south Asian markets.

Prices for mungbeans delivered to up-country packers have changed little from last month, with No. 1 grade still quoted at $1400/t, processing at $1300/t and manufacturing at $1200/t.

“It’s impossible to pick a trend going forward, but given the forecast size of a moderate Australian crop, there should be enough demand to ensure prices hold until the crop comes off.

“As with every season, things may change if one of the three qualities happens to dominate the deliveries.”

Mr White is based at Biloela in central Queensland, and said adverse weather or late plantings may cause more manufacturing quality to come to market than anticipated and this could push down the manufacturing price.

“It is is historically very high at the current levels.”

Mr Whiite said some multi-grade area contracts have been taken out by growers.

“However, the very nature of an area contract with no fixed grade nominated means that implicitly all the risk lies with the buyer, and this has to be factored into the price.

“Because mungbean marketing is not as clear cut as other coarse grains, there are still a lot of growers who prefer to rely on the relationship they have with their packing shed rather than shopping around for a high-priced contract.

Mr White said the CQ crop was “a bit like the rain: variable and patchy.

“There has been a spread of planting dates from very early January to some crops still being planted now.  The

He said the earliest crops were ready to be sprayed out next week, and have suffered some weather damage, while other growers were having trouble getting on to their crops after rain to control pests.