MORE THAN 1.25 million tonnes (Mt) of grain has been received at CBH Group sites in the Western Australian harvest to date, according to the company’s weekly harvest report dated November 8.

Table 1: CBH Group receivals from the Western Australian harvest to date, and the week to November 8. Image: CBH Group

While harvest in the state’s southern zones, Albany and Esperance, has just gotten into gear, receivals in the harvest to date in the central Kwinana zone and northern Geraldton jumped significantly in the past week.

“This past week has seen harvest really pick up as we get into the swing of things, particularly in the Geraldton and Kwinana zones,” Mr Capper said.

“We battled to get going in our southern zones due to some adverse weather conditions, but we are starting to see some fantastic results this week with big volumes being delivered to some of our sites.”

CBH Group said nearby demand for WA grain from its markets had improved in the past week, with many customers now ramping up their coverage on the realisation that WA grain would be the most competitive Australian grain available this year.

This has been seen as positive for WA growers, as increased interest has been supportive of CBH Group’s bids to grower.

The company said sales of WA grain into eastern Australian ports has slowed as the eastern harvest gathers pace, and recent rains have increased its chances for a large sorghum crop.

CBH Group said while demand for malting barley remains strong, the size of the WA feed barley crop was placing pressure on local values, as demand for it was not keeping pace with receivals.

Malting barley selection rates have been running below average, due predominantly to screening issues, but CBH Group anticipates this will improve as harvest continues throughout all zones.

In the wheat market, CBH Group on Friday quoted APW1 was bid at $355/t free in store (FIS) Kwinana, and many growers in the Geraldton and Kwinana zones were harvesting above-average yields.

Wheat quality has been mixed, with protein results appearing higher than last season on deliveries to date.

Demand for wheat has opened up in the Middle East and Southeast Asia in recent weeks, which has supported values.

CBH Group said EU buyers have “finally reconnected” with the Australian non-GM canola market, and were keen to cover some of their demand into next year.

However, this demand is still well behind traditional buying programs, dampened by large Ukrainian exports into the EU. 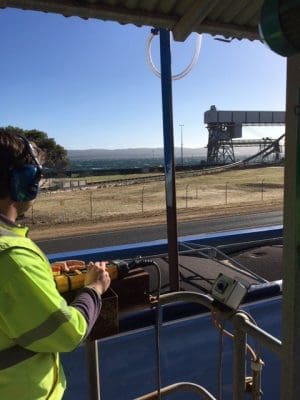 A load of canola coming into Gairdner kicks off CBH Group’s receivals in its Albany zone. Image: CBH Group

Rain across most of the zone in the first weekend of November further delayed the start to the zone’s harvest, but some sites across the north of the zone were now taking in grain, with Hyden, Karlgarin and Lake Grace all receiving loads of barley earlier last week.

“As a comparison at the same time last year, we had received 100,000 tonnes,” Mr Thornton said.

“At this stage it is too early to gauge quality as the majority of barley received to date has been feed grade by variety.

“With improved harvesting conditions and an increasing number of samples being assessed, we expect a number of sites to open this week and deliveries to ramp up.”

Harvest in the Esperance zone has gathered pace in the past week, with most sites across the zone now receiving grain.

Deliveries have been mostly canola, with some barley and field peas in the mix.

“It now looks like quite a few growers have started their harvesting program and, provided the weather stays fine, we should see some good tonnages next week,” Mr Daw said.

WA’s northernmost grain zone had some good volumes come in, with half of all grain received this year coming in last week alone.

“We are fortunate to see a mostly clear week ahead with ideal harvesting conditions,” Geraldton zone manager, Duncan Gray, said.

“At this stage we have nearly reached our canola and barley estimate, so it’s possible that by the end of (this) week, we will exceed that estimate.

“We are also hearing reports that wheat and barley yields are up to 5 tonnes per hectare in some areas, which is fantastic news for growers.”

The Kwinana zone received 488,000t of grain last week, with barley accounting for most of the tonnage, and wheat and canola starting to appear.

“Most of our sites are open across the zone now, and although deliveries in the south of the zone are still slow, with fine weather we should see good tonnes come into the system next week” Kwinana assistant zone manager, Allan Walker, said.