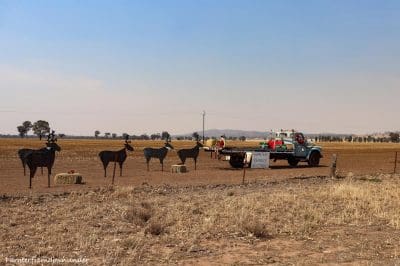 The Christmas spirit is alive between Grenfell and Caragabal. Photo: Farmer from Down Under

PRICES for sorghum have spiked in the past week.

Wheat and barley prices across Australia have also firmed by up to $10 per tonne to reflect an ongoing lack of grower selling, early export sales, and some shorts left by the likely prospect of a tiny sorghum crop in southern Queensland and northern New South Wales.

Drastic moves this week were confined to sorghum, driven by looming holidays and hopeless season disintegrating chances of a sizeable crop to fill the March-April delivery slot, and growers and traders being pressed to cover contracted commitments.

Wash-outs, where the seller pays the buyer the contracted value of the grain as an alternative to supplying the grain itself, have driven the rally.

Six months ago, sorghum prices were below wheat values and while wheat prices now are broadly level with their second-half 2019 lows, sorghum since the end of July has risen more than $100/t on waning summer-crop prospects.

Trade sources have said many growers who regularly harvest sorghum crops which yield 3-4 tonnes per hectare are looking at zero production when harvesting time rolls around in autumn.

“Some growers who have never sown nothing over summer have nothing in the ground now,” one trader said.

“We are staring down the barrel of a complete production failure in southern Queensland and northern NSW, and we need two lots of 100 millimetres of rain to turn that around.”

With extremely high temperatures across south-eastern Australia this week, and no more than 10-20mm of rain forecast up to 2 January, that seems highly unlikely.

“Growers as well as traders have forward sold, and wash-outs have got to happen.

“It’s the growers that are short that are buying it.

Poultry producers in the wider Brisbane region, along with ethanol producer Dalby Bio-Refinery Limited, have some inelastic demand for sorghum.

They are thought to be covered up to May-June, when the yet-to-be-planted Central Queensland crop should be available off the header.

ABARES pitched sorghum planting and production prospects in its Australian Crop Report on December 3 as shown in Table 1.

It was based on assumptions in November, and would have foreshadowed Central Queensland at least to have a fair summer-crop season.

Nothing has improved on the eastern Australian weather outlook in December to provide hope for planting rain.

The cattle and pig stockfeed market appears happy to exclude sorghum from rations now that the red grain is trading at a $25-$30/t premium to wheat in the delivered January Brisbane market at $435/t, and wheat is at a $55-$60/t premium to barley.

An inverse for wheat exists into January before falling by around $10/t for February plus carry slots, to reflect an expected increase in supply of interstate feedgrain into NSW and southern Queensland.

“The market’s not being supported by the consumer at these levels; it’s trade shorts that are driving things up.”

Consumers are switching into wheat and barley from the Brisbane and Newcastle free-on-truck markets, and from railheads in NSW.

Some are taking contract wash-outs from suppliers and covering their needs with the cheaper white grains.

Traders this week again spoke about the need for a “Christmas miracle” in the form of widespread rain to get a sizeable NSW and southern Queensland summer crop planted.

With sorghum needing roughly 100 days to grow, a mid-April harvest from a mid-January plant is the best current forecasts allow.

Growers said a big Christmas or New Year rain would more likely spark a big planting of mungbeans and a reduced planting of sorghum, or they’d be banking the moisture for the 2020 winter crop.

“There’s a firm tone to barley and wheat, particularly for January, and across Australia, there’s limited grower selling in the south and the west.

Traders said the barley market had received a boost from the Saudi Arabian barley tender awarded late last month, with the Glencore-owned Viterra now seen likely to supply two or more cargoes out of southern Australia.

Saudi Arabia’s barley imports in 2019 will be around 8.3 million tonnes.

With China still out of the market while it investigates historic pricing of Australian barley, Saudi demand, coupled with accumulation for the east-coast market, has supported prices.

January 2020 pick-up cottonseed sell quotes had been available during the week at something like $650/t ex the Murrumbidgee Irrigation Area (MIA) sites in the south and say $750/t ex the Darling Downs in the north.

ASX volume up, OI down

ASX wheat and barley futures this week continued to wash open interest.  Reducing open interest is normal in the nearby month Harvest pressure normally helps but this year it was minimal. ASX futures price settlements continued to lift, rising at least one per cent over the week.

March 2020 wheat traded 1534 lots at premiums notionally between parity and $2/t over the January contract.