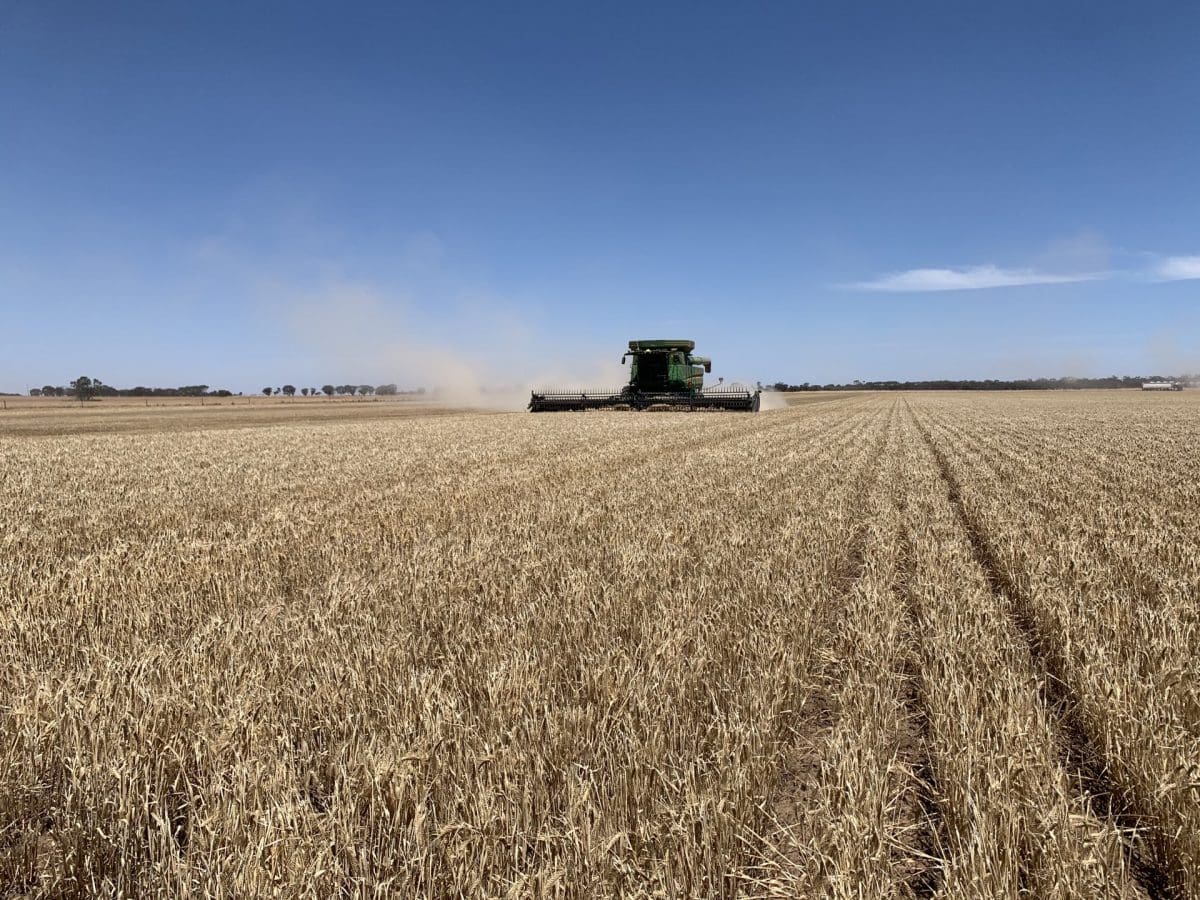 A crop of Maximus CL barley comes off in the 2020 WA harvest. Photo: Intergrain

GLOBAL demand for beer containing more malt is lifting the call for high-specification malting barley as sales rebuild after COVID.

Known as premiumisation of beer, it was an aspect of the market discussed by Boortmalt regional merchandising manager Simon Robertson in his address to the Grains Industry Association of Western Australia (GIWA) 2021 Barley Forum on Monday.

Boortmalt is owned by the French cooperative Axéréal , and has a malting capacity of about 3 million tonnes (Mt) globally, with 500,000t of that in Australia. Mr Robertson said there had been a drop during 2020 of around 8-10 per cent in the volume of global beer sales, with COVID’s impact on consumption at pubs and clubs the major factor.

“Projected recovery is going to be a bit slower than we thought, so we’re going to reach 2019 volumes in 2025.”

But while beer has lost market share, he said it was not losing value.

“We’re seeing a trend of premiumisation.”

Mr Robertson said this involved brewers using more malt in their recipes to make beer, or different types of malt with a higher specifications.

“This premiumisation trend is going to continue in Southeast Asian markets, and we have to think about what that means.”

“Typically we’ve relied really heavily on Bass and Flinders to meet these specifications.

“These days we’re leaning pretty heavily on Planet to help us out.

Spartacus now is, by volume, one of the main varieties being grown, but it needs to be supported by some of the other varieties to meet those specifications.

“We don’t see any obvious replacement for Bass and Flinders in particular.”

The quandary for barley growers, exporters and maltsters appears to be how to encourage growers to plant varieties with higher specifications but lower yields than the higher modification varieties.

Both Planet and Spartacus are high yielders. They are among the varieties performing well for growers across southern Australia who find themselves selling their malting barley into the global stockfeed market in China’s absence. Mr Robertson said the introduction of China’s tariff on Australia caused “huge disruption” to the pricing of Australian malting barley.

“Australia went from being one of the highest priced, along with Canada, to the cheapest.

“The impact of that locally is we’re seeing that premium for malt dissipate.

“At the moment, we’ve got a very low-priced environment for malting barley.”

The exception appears to be those growers in close proximity to Australian malthouses, and can be assured their grain will not be sold for stockfeed.

As major global brewers move towards their carbon-neutral goals throughout the entire supply chain from paddock to glass, Mr Robertson said maltsters were looking increasingly at the sustainability credentials of the barley they used.

“We need to make sure those signals are sent down the chain to growers and done in an efficient way.”

“The first step for us is sourcing sustainable barley, and we’re doing that through ISCC; the next is to use the Cool Farm Tool and have more engagement on an agronomic basis.”

Mr Robertson said Boortmalt would be engaging with the Kondinin Group to help assess the merit of the Cool Farm Tool as a carbon-assessment mechanism for use by growers.

“We’d hope to have some sort of benchmark over two seasons in the next three to four months.

Mr Robertson said supply of processed malt to the developed markets of Western Europe, North America and Australia was showing relatively flat growth, and a shift to craft beer.

“Craft has a whole lot of other features like sustainability and provenance…it is quite high in malt inclusion.”

He said developing markets very much in the premiumisation cycle were Eastern Europe, Latin America, China as well as North Asia.

The emerging markets are in Southeast Asia, the Middle East and Africa.

He said growth in the non-alcoholic beer market was also being seen.

Mr Robertson said while half the Vietnam malt market was a developing one where premiumisation was taking place, the other half was emerging and volume-based.

“In supplying the Vietnam market, we’ve got to be mindful of quality.”

Figure 2: Australian malt export (June-May) data, tonnes. The green star indicates markets requiring malt in which additives are not used at the malthouse. It includes high modification varieties such as those shown in figure 1 within the green star. Source: Boortmalt from ABS

He said a “tempered recovery” with a compound annual growth rate of 2pc was expected between now and 2025 in the Asia-Pacific region demand, but China’s was stronger at 4pc growth for 2020/21, with its beer production for January to May up 18.9pc on the same period last year.

“We still have these headwinds around COVID; however, over the longer term, we are expecting a recovery and there is tight malt capacity versus expected growth in the global beer market.

“If we look to the EU in terms of future direction, the maltsters are pretty much at 100pc capacity.

He said global utilisation of malting capacity was expected to remain steady.

“Back in April, some of the pubs opened in the UK and we’re seeing an increase in exports out of the EU, compared to 2020, they’re up 16pc.”

He said utilisation of Australian malting capacity has also bounced back post COVID.

“This time last year some of the malting plants were running at 50pc, some of them were even lower.”

He said Australian malt used in Singapore went to Nestle to make Milo, and that may be in for a change.

“They might not use processed malt, but may go to malting barley.”

He said South America was now “quite a significant market” for Australian malt.

Both globally and domestically, Mr Robertson said an increase in malting capacity was being seen. Boortmalt has recently reopened its Cavan malting plant in Adelaide.

That includes expansion at United Malt Group’s (UMG) Bairds Malt facility at Inverness in Scotland, and a new plant in Finland for Scandinavian maltster Viking.

This year, Boortmalt and Soufflet each opened their first malthouses in Ethiopia to process mostly locally grown barley.

Expansion has also occurred in Australia, with UMG’s Barrett Burston plant in Perth on track to more than double its production capacity to 110,000t per annum.

Also, Boortmalt has reopened its Cavan plant in South Australia to boost malt production in the state which until recently came from its Port Adelaide facility alone.

Along with Port Adelaide, Minto near Sydney, Ballarat in Victoria, Launceston in Tasmania and its biggest plant at Forrestfield in Perth, Cavan brings the number of operational Boortmalt plants in Australia to six.

“There is additional capacity coming online with malting barley.”