CUTTING-EDGE gene technology is being used to boost the brewing performance of current Australian barley varieties in our biggest market – China. Australia exports more than five times as much barley to China than the next largest market, Japan, with premium malting barley making up a healthy share of the demand.

AEGIC Barley and Oat program manager Mark Tucek said supporting this demand and the premium prices received was critical to the profitability of Australian barley farming.

“Previous AEGIC market intelligence confirmed that Australian barley is well-regarded in China for its excellent malting properties,” he said.

“Barley protein is important in brewing. Too much protein can mean there isn’t enough starch available for optimum beer fermentation. Not enough protein affects beer flavour and foam characteristics, and can also affect the level of free-alpha-amino nitrogen (FAN), which feeds hungry yeast.”

Mr Tucek said Australia had an opportunity to take action to maintain the Chinese market by coming up with ways to enhance the performance of Australian barley protein for brewing.

“AEGIC’s response is to ask the research question: ‘Is it possible for brewers to use existing barley protein more efficiently?’,” he said.

“Currently, a considerable amount of malt protein is discarded during brewing in the form of spent malt. Developing new ways to harness this wasted protein could be an opportunity for the Australian barley industry.”

Mr Tucek said the project was using the latest biochemical tools to identify, down to the level of individual genes, the important enzymes that affects malt protein utilisation and beer qualities.

“The ultimate aim of this research is to develop – and demonstrate to Chinese brewers – new techniques for malting and mashing to get the most out of existing barley protein, while maintaining beer quality.”

Mr Tucek said the project involved collaboration with Murdoch University. Chinese malt and beer producers have provided enthusiastic input to the project and are set to join as collaborators. The project could have impact in other markets beyond China in the future. 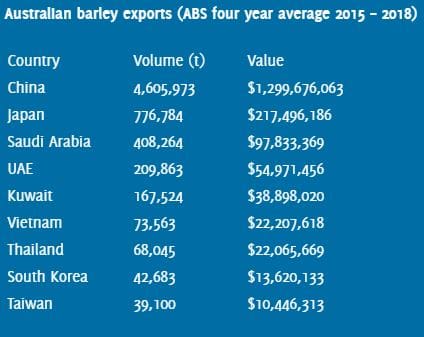