A crop of faba beans in flower at Tungamah in central Victoria. Photo: Crop Smart

HARVEST of Australia’s 2021-22 pulse crop has started and bulk exports are switching from old to new crop on chickpeas and faba beans amid ongoing difficulties with container shipments into South Asia.

Tempering exporter demand for pulses in the near term is Australia’s hefty new-crop canola and wheat export programs, which will make it harder for chickpeas, lentils and fabas to jostle their way on to shipping stems from December to March.

Prices for major pulses have therefore traded sideways to softer, which reflects supply-chain issues rather than a weakening in global demand.

Harvesting of chickpeas is well under way in Central Queensland (CQ) and southern Queensland, but is at least four weeks away from starting in most parts of northern New South Wales.

Successive storms and showers south of CQ have delayed harvest for many growers, but traders report the yield and quality of chickpeas harvested to date is good to excellent.

The CQ crop is estimated at around 100,000 tonnes. Trade sources believe that much of it has already been booked to load on vessels calling in Gladstone and Mackay over coming months, with Bangladesh the major market.

Containers ex Brisbane and Sydney usually a chunk of the southern Queensland and northern NSW crops, which are respectively seen at around 350,000t each, but extremely expensive and unreliable freight beyond South-East Asian trans-shipment ports is strangling business.

This has seen the delivered Downs packer market sink to around $510-$520 per tonne, down from a nominal $600/t for new crop quoted last month.

“Growers don’t like the price, and the wet weather around has them worried.”

Broker Peter Wilson said the trade was targeting arrival of chickpea cargoes in Bangladesh in time for Ramadan in April.

“That means people will be positioning themselves for December-January shipment, and mid February at the latest, to meet that,” Mr Wilson said.

However, chickpeas for bulk export are having to compete with wheat, which is generally seen as having a more attractive elevator margin because it is exported in bigger cargoes.

“We are running a massive wheat export program out of Australia, and everything else is probably going to have to sit behind that if it’s not booked already.”

Mr Wilson said chickpeas looked very much like the commodity growers would be storing if the price did not improve markedly.

Pakistan Pulses Importers Association president Muhammad Ahmed said most containers were taking more than 60 days and up to 120 days to get from Australia to Pakistan.

“At the moment, there is very little freight available out of Australia to Pakistan and I believe exporters don’t have the choice to select lines or voyages to fulfil existing contracts.

“They don’t see the freight situation improving before Easter.”

Traders have also reported that freight now forms up to half the cost of chickpeas landed Pakistan, up from 20-30 per cent in 2019, when sailing times were more like 20-30 days.

Harvest of faba beans has started in southern Queensland and north-west NSW on the crop which ABARES estimating at 442,000t from 249,000 hectares in its Australian Crop Report released last month.

Prompt prices are sitting at around $390/t deliver container packers at port for current crop in South Australia and Victoria, and new crop in Brisbane, unchanged from last month.

Packers on the Darling Downs are paying around $370/t, but competition from sorghum and the last of the current-crop mungbeans is continuing to thwart the northern faba market.

“The market is weakened by the lack of available containers and/or vessel space,” Agri-Oz Exports managing director François Darcas said.

New-crop faba beans delivered packer are trading at about $385/t into Wimmera sites, $420/t into Melbourne, and $430/t in the Adelaide track market.

Egypt remains a buyer of current-crop fabas, with one 25,000t cargo loading in Adelaide earlier this month, and another 20,000t booked to go the same way next month.

Going on volume shipped, this supports the trade’s theory that the 2020-21 crop was well above the 510,000t as estimated by ABARES.

“This makes Egypt well supplied in the near term, ahead of what looks like another bumper Australia crop with the cool and wet finish we are enjoying.”

Egypt is also receiving European fabas now, including a larger and better-quality UK crop this year compared to last.

Prices for lentils have dropped $100/t in the past month to around $950 delivered port as the trade completes execution of early cargoes to capture India’s reduced tariff.

“The market’s been flat for a few weeks; prices here have gotten above what you can get at destination, and containers continue to be a nightmare,” Teague Australia director Tim Teague said.

“A lot of people have waved the white flag.”

Growers appear to be in no hurry to forward sell their lentils, and GeoCommodities managing director Brad Knight said they were ever cautious about overcommitting in storms, frost, or heatwaves impacted yields in the crop’s final weeks.

“Lentils aren’t home until they’re in the bin.”

Mr Knight said Australian exporters were comfortable in the knowledge that a big is coming, and were not in a hurry to accumulate pre harvest.

“Exporters have a risk-off attitude.”

South Australia’s Yorke Peninsula and the Victorian Wimmera are the two heartlands of Australian lentil production, and while most crops in both regions have had kind growing seasons, other areas have had a late start and below-average rainfall.

Demand from China  and Vietnam is supporting prices for mungbeans for nearby and new-crop shipment.

Very few mungbeans from this year’s harvest are unsold, and those that are have been fetching around $1050-$1100/t for machine-dressed manufacturing grade, little changed over recent months.

Deacon Seeds general manager Mark Schmidt said a small area of new crop was being planted as the last of the 2020-21 summer crop was exported.

“We’re still getting demand coming out of China and Vietnam, which is good for new crop.”

Mr Schmidt said the first of the spring-planted mungbeans would be harvested in northern NSW in December and January, and 2021-22 was shaping up as a big production season.

Mungbeans have a much smaller requirement for nitrogen than sorghum and cotton, Australia’s two dominant summer crops. Mr Schmidt said this was adding to their appeal now that fertiliser had become so expensive.

“Growers that have grown mungbeans year in and year out have been getting positive results, and they use less nitrogen than sorghum and cotton.”

With storms currently rolling through southern Queensland northern NSW, some paddocks have good subsoil moisture available, and will be double cropping into mungbeans once they harvest their wheat and barley.

“Some of our best crops have come from double cropping into wheat and barley stubble, and some of those crops are coming off now.”

Seed sales, subsoil moisture and high urea prices are all pointing to a harvest next year which produces well above the 100,000t or so harvested this year.

If CQ gets a good break and is able to plant intended area in January-March, a crop level with the record of 150,000t is seen as possible.

On the freight front, the high price of mungbeans, and its markets in Asia, are making it the most appealing pulse to export in containers.

“Freight is so lucrative coming south; there are a lot of (supply) shortages in Australia, and shipping companies want to go to Asia,” Australian Choice Exports managing director James Hunt said.

“I get the feeling Australia might be going to turn a corner soon.”

Civil unrest in Burma has disrupted supply from the world’s major shipper, and Mr Hunt said this has been supportive of export demand for Australian product.

“There is a bit of trade happening, and growers are doing some hectare contracts,” Mr Hunt said. 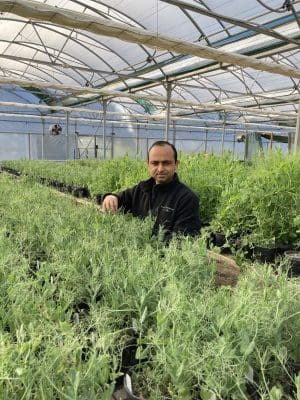 “However, it is susceptible to fungal diseases – blackspot, downy mildew and powdery mildew – and bacterial blight,” Dr Pandey said, adding that proactive disease management was needed to maximise yield potential in higher-risk environments.

PBA Taylor is a mid-flowering and early to mid-maturing field pea, slightly later than PBA Wharton but earlier than Kaspa.

PBA Noosa is a high-yielding, blue pea variety ideal for the domestic splitting market with a 25pc long-term yield advantage over Excell.

“It is a semi-leafless and semi-dwarf plant, with a good level of resistance to downy mildew and tolerance to salinity.”

This pea’s structure has improved harvestability compared with its predecessors, featuring a non-shattering pod which will reduce harvest losses.

PBA Noosa and PBA Taylor will be marketed and managed by PBSeeds and Seednet respectively, and the varieties will be produced in commercial quantities in time for the 2022 growing season.

Both varieties suited to the major field pea-growing regions in Australia, namely western Victoria, South Australia and NSW, and are suitable for the export and domestic markets.