In most cases, snow on swathed canola will take longer to shake off and dry out than snow on standing canola. Source: Canola Council of Canada.

USDA revised downwards again the forecast  for Australia’s 2019/20 wheat crop to 18 million tonnes (Mt), 1Mt lower than last month but 700,000 tonnes greater than last year. Harvested area was not altered from the previous month forecast of 10.7 million hectares.  Yield, at 17 per cent below the five-year average, was forecast at 1.68t/ha.

But its forecast of cotton production in Australia foretells the breadth of the extreme dry. The Australian cotton crop outlook, severely restricted by drought, is forecast to result in harvested area and production around half those of last year (as graphically shown in Figure 1), the second-lowest crop in 30 years. 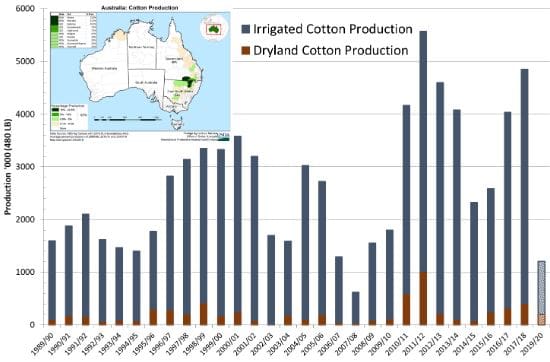 USDA said the central Indian crop is presently in the boll stage and NDVI analysis is showing strong crop vigour in both Gujarat and Maharashtra. The cold conditions not only dropped several inches of snow late September but were accompanied by an early, season-ending freeze in Saskatchewan, Alberta and Manitoba which produce almost 90pc of Canada’s canola crop. Figure 3 shows widespread freezing conditions ranging from 5 below to 15 below degrees Celsius. 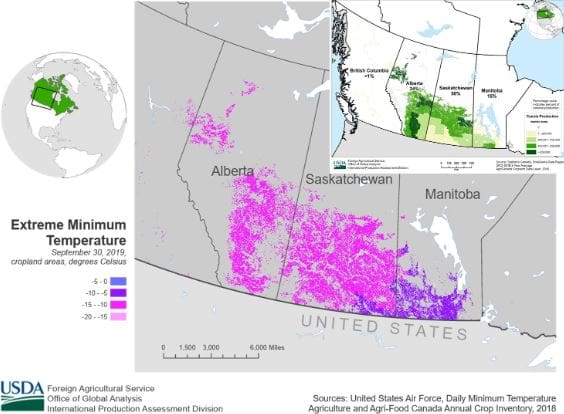