LARGE volumes of grain continue to pour into the CBH Group network, with an additional 3 million tonnes (Mt) delivered in the week to Sunday to take total receivals 13.4Mt, the cooperative said in its latest weekly Harvest Report.

“These records have been made possible by our growers, frontline and maintenance teams, as well as our significant investment into expanding and enhancing our network sites.”

Mr Daw acknowledged that this volume had placed significant pressure on everyone involved with harvest, including growers, their families, employees, transporters and CBH employees.

“As the pace of harvest continues, we are actively working to ensure that we can maintain services for growers.”

“We are doing everything that we can to put more capacity on and ease pressure which includes building more temporary storage.”

“We have successfully completed over 1.4Mt of temporary storage in addition to last year’s 2.4Mt, and we are continuing to build more in the required locations.”

“However, more sites will continue to fill and close in the next few days.”

This zone encountered some weather delays in the week to Sunday, with most deliveries being barley and canola, with some oats as coming in as well.

Wheat deliveries are increasing in the northern part of the zone.

Grain quality has been good across the zone, with variability being seen in some areas, and yields continue to be above expectations.

With Chillinup opening this week,  all sites in the zone are open and receiving grain, and the average zone cycle time is sitting at 38.8 minutes.

The Esperance Zone had another slow week with with heavy rain along the coast and lighter falls in the Lakes limiting deliveries.

All commodities are being received across the zone, with most growers through their canola and now into barley and wheat.

Area managers have been working closely with growers and bin reps to place the appropriate segregations on site to cater for different grain qualities.

All locations are open with zone cycle time averaging around 44.7 minutes, with the port slightly higher at 62.5 minutes.

Canola and barley deliveries have largely finished, and the majority of receivals are wheat and lupins.

Grain quality is very good, with plenty of high-protein wheat.

Arrino, Marchagee, Morawa and Perenjori all broke daily receival records in the week to Sunday, and some sites including Marchagee and Canna will be closed by early next week.

Harvesting conditions during the week to Sunday were good in Kwinana North Zone, with no disruptions.

All commodities are now being received, with canola deliveries just about complete, and growers now into their barley and wheat harvests.

Grain quality has been good, with yields higher than expected in some areas.

All sites are open throughout each area, with zone cycle time sitting at 40.4 minutes.

Kwinana North Zone had its busiest day on record on December 5, when it received 186,352t.

Some sites including Bencubbin and Burracoppin and services will close over coming weeks.

Harvest receival volumes are climbing each day, with last week being the largest week to date. 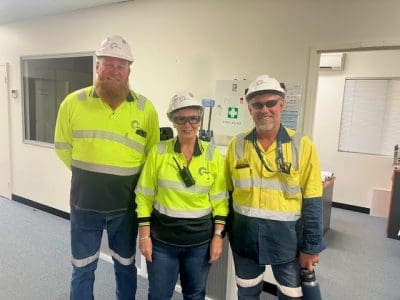 Canola receivals are falling slightly as more growers move to barley and wheat.

Half the zone’s estimated deliveries have been made as of Sunday, and segregations are limited at some sites due to storage pressures.

“This was recently demonstrated when a train came into Avon at short notice on Sunday 27 November.”

“We desperately needed to load the train so that we could keep the canola segregation from filling.”

“Sharyn, Toby and Bradley dropped what they were doing and came out to Avon at midnight to load the train.”

“Had the train not been loaded on the Sunday at midnight, we would have had to temporarily stop receivals.”

“The team are worthy of this harvest hero nomination for their continued dedication to the co-operative and help in keeping the supply chain operating in the Kwinana South zone.”