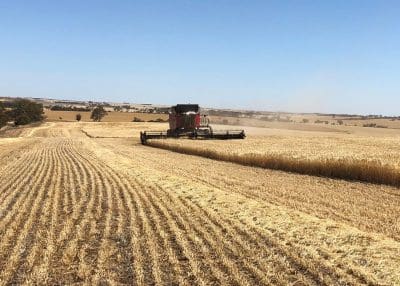 WESTERN Australian growers have delivered 1.79 million tonnes (Mt) of grain to CBH Group in the week to Friday, which has lifted this harvest’s intake to 3.27Mt.

Harvest activity increased markedly over last week due to warm and dry weather, and WA’s major bulk handler had 111 sites open as of Friday.

On Wednesday, CBH received 330,000t of grain on the largest receival day of the harvest to date.

“We are likely more than a quarter of the way through harvest now, and we expect daily receivals to peak over the next few weeks,” CBH general manager operations Ben Macnamara said.

“Given seasonal conditions, we have been seeking to manage segregations to cater for the wide variability in crop quality.”

Mr Macnamara said around half of CBH’s receivals to date had been barley, and just over one quarter had been wheat.

“We’re anticipating wheat deliveries to increase in the coming days.”

The Geraldton zone experienced a range of weather conditions over the past week with thunderstorms typical of summer months, rain, excessive heat which led to harvest bans, and bushfires on Thursday and Friday.

Growers have therefore had a stop-start week and found quality to be variable and yields to be below expectations.

The zone is around halfway through its harvest, and favourable weather conditions in the next week should see it start to wrap up quickly.

Merredin with 84,000t has received the most grain out of any Kwinana North site to date this harvest.

Across the zone, all sites are now open, and hot and windy weather led to harvest bans across the zone last weekend.

Barley deliveries have wound, and wheat is now accounting for the majority of receivals.

Wheat quality is varied, with both high and low protein and high and low screenings, and no discernible pattern throughout the zone.

Yields are lower than expected across most of the zone.

Avon with 82,000t has received the most grain to date of any Kwinana South site in the harvest to date.

Hot and windy weather led to harvest bans in several areas last weekend, and 25 sites are now open across the zone, with more wheat deliveries coming in as the barley harvest winds down.

The site with the most receivals to date this harvest is Gairdner with 99,000t.

Weather across the zone has been warm and dry and good for harvest, and all sites in the Albany zone are now open subject to demand.

Receivals continue to be mostly barley, with some growers in the north-eastern areas moving on to wheat.

Esperance Terminal with 330,000t is the site which has received the most grain in the zone’s harvest to date.

A harvest ban was in place last Sunday due to excessive heat, but the forecast for this week looks favourable, and CBH is expect to receive significant tonnages.

Growers in the Esperance zone are moving through their harvest program quickly, and have now shifted from barley to wheat.

As with other zones, yields and quality are widely variability.

Grower selling of wheat is very quiet for this time of the year as growers look to wait until they finish their wheat harvest before selling tonnage.

International interest is steady, with Southeast Asia and Middle East interest seen during the week, which suggests the Australian market is at international parity.

Grade spreads have the potential to contract further, with the majority of demand interest to date being for lower grades, and higher grades attracting limited interest.

China last week announced an extension of its barley anti-dumping investigation, now due to be finalised on 19 May 2020.

Ahead of the news, feed barley prices firmed mid-week to $275/t FIS Kwinana before finishing the week approximately $5/t lower, on harvest price pressure fuelled by volume selling from growers.

The Saudi Arabian Grain Organisation (SAGO) released a tender this week for around 1Mt of feed barley, and Australia has potential to compete for some of these positions.

Malting selection rates continue to remain below 20 per cent in WA, below the average of 30pc.

European interest continues to be seen as European crushers look to cover their first-quarter 2020 requirements. GM canola values began to firm by the end of last week, lifting $15/t to $573/t FIS Kwinana, which has attracted a reasonable amount of grower selling.

The oat market continued to firm last week, and rose by roughly $8/t as the trade looked to source good-quality oats in what has been a challenging year because of the dry conditions.

Oat values remain relatively firm as customers and the trade look to cover.