USDA has cut its estimates for North American corn and wheat production in the August WASDE. Photo: USDA

GLOBAL wheat production for 2021-22 is forecast by USDA at 776.9 million tonnes (Mt), down 2 per cent 792.4Mt seen in July, with hefty cuts to Canada and Russia nowhere near enough to counter rises in some countries including Australia.

This is down 23.8pc from 31.5Mt seen last month because of worsening drought conditions across the Prairie Provinces during July.

“This would be the smallest Canadian wheat crop since 2010-11,” the report said.

Canada’s forecast wheat exports at 17.5Mt are down 23.9pc from 23Mt seen last month, and are part of the report which is bullish for global wheat and corn values, and neutral for oilseeds.

The US wheat production forecast has been cut to 46.2Mt from 47.5Mt seen last month, again on dry conditions, and mostly in Hard Red Winter and Soft White Winter areas.

US wheat exports are seen as steady at 23.8Mt because of lower domestic use.

Russia’s wheat harvest is now expected to yield 72.5Mt, down 14.7pc from 85Mt forecast in July, despite an increase in spring wheat production.

Winter wheat harvested area is reduced on updated area data from Rosstat, Russia’s statistical agency, while yield is lowered on harvest results reported by the Ministry of Agriculture.

A series of thawing and refreezing events, or ice crusting, during February and March, was behind cuts for area and yield in Russia’s winter wheat. 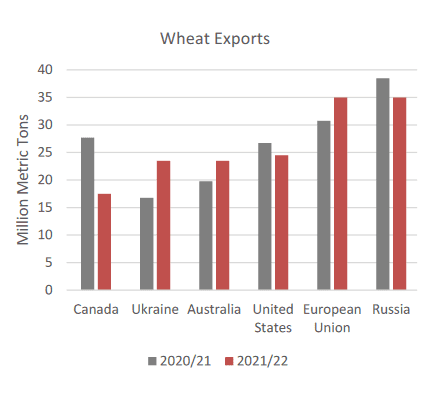 USDA has lifted its forecast for Australia’s new-crop wheat 5.3pc to 30Mt from 28.5Mt seen last month on “abundant precipitation” which has benefited crop conditions.

At 10pc, the lift in the expected Ukraine crop to 33Mt from 30Mt is the biggest seen this month, and is based on increased area as reported by Ukraine’s State Statistical Service, and higher yields on harvest results to date.

Likewise, China’s forecast production at 136Mt and imports at 10Mt are steady on last month, but its ending stocks have been cut 1Mt to 141.6Mt.

Projected 2021-22 world wheat consumption has been cut by 4.2Mt to 786.7 Mt, with most of the decreases in feed and residual use with the curtailed supplies in Russia and Canada.

“The reduction in aggregate exportable supplies from major exporters resulted in decreased imports from several countries including Afghanistan and Algeria, while larger crops in Brazil and Morocco reduce import demand there.

Projected 2021/22 world ending stocks are lowered 12.6 million tons to 279.1 million with China accounting for 51 percent of the total.

USDA also released its monthly Grain: World Markets and Trade report overnight, which said increased estimates for corn crops in India, Russia and Ukraine were not enough to counter cuts to EU and US corn production.

“Global trade is lower than last month on smaller exportable supplies for the United States and shrinking expectations for Brazil exports over the October 2021-March 2022 period, overshadowing gains for Ukraine and Russia,” the report said.

In its Crop Production report also released overnight, USDA said record-high yields are expected in Illinois, Indiana, and Ohio, but  yields in Minnesota and South Dakota are forecast below a year ago.

The forecast for US corn exports has been trimmed 2Mt to 61Mt, but Ukraine’s forecast corn exports are now forecast at 32Mt, up from 30.5Mt seen last month.

On barley, Canada’s drought is expected to severely impact production, and USDA has slashed its estimate for Canada’s barley exports to 2.7Mt, down 40pc from 4.5Mt seen last month.

“As an exporter, Canada has been a relatively small player in the global barley trade,” USDA’s trade report said.

“However, the share of its production destined for export has trended upward in recent years, and about a third of the crop is slated for  foreign markets in 2020-21.

“China has been the top destination, followed by the United States and Japan.

“Limited exportable supplies will impact exports to China, given that China  accounts for the lion’s share of Canada exports.”