■ Australian farmers look to 2018 with optimism, as confidence rebounds from recent low

■ Sentiment particularly strong in sheep, beef and dairy – but up across all agri sectors

■ Commodity prices drive much of the upswing, but recent rains also provide boost

AUSTRALIA’s farmers are looking to 2018 with renewed optimism, with rural confidence levels rebounding from the four-year low recorded last quarter, according to the latest Rabobank Rural Confidence Survey. 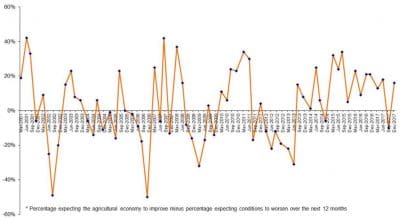 The resurgence in confidence has been largely driven by the strength in commodity markets – particularly for wool, lamb, beef and dairy – while recent widespread rains have also provided a boost to farmer sentiment.

The rain, however, came “too late” for crops across much of New South Wales and southern Queensland, with the dry winter and frost events set to see the national winter crop come in well below average and some 24 million tonnes below last year’s record.

The latest quarterly survey, completed last month, found the percentage of Australian farmers expecting conditions in the agricultural economy to improve in the coming year almost doubled this quarter, to 28 per cent – up from 17pc in the previous survey. At the same time, those expecting conditions to worsen halved to 12pc, from 27pc.

More than half of the nation’s farmers (58pc) had a stable outlook, expecting conditions to remain relatively unchanged in the year ahead.

Rabobank national manager Country Banking Australia Todd Charteris said much of the positive sentiment prevailing across the country was coming out of the livestock sector, with graziers enjoying strong returns for lamb, wool and beef. Dairy farmers were also looking at much-improved milk payouts. 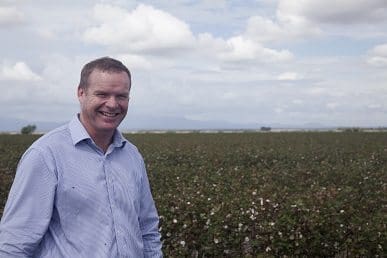 “The phrase ‘riding on the sheep’s back’ is starting to ring true, with sheep graziers the most bullish about their prospects on the back of elevated wool and lamb prices,” he said.

“This optimism is expected to continue in the year ahead, with 38pc of sheep farmers anticipating conditions to improve further in the next 12 months, while a further 56pc expect a continuation of current conditions.”

With domestic grain prices also lifting in recent weeks – and well above global prices which remained lacklustre – Mr Charteris said commodity prices were nominated as the biggest driver of farmer confidence across the country. A total of 66pc of those farmers with a positive outlook cited commodity prices as reason for their optimism.

This quarter, seasonal conditions also emerged as a dominant driver of farmer confidence, cited by 57pc of farmers expecting conditions to improve, up from 34pc in the previous survey.

The improvement in seasonal conditions was reported in most states, Mr Charteris said, with the biggest turnaround in South Australia, Queensland, Western Australia and Victoria.

“After such a dry winter, the rains came ‘in the nick of time’ for crops in Western and South Australia and minimised potential crop loss, although it wasn’t enough to bolster production in South Australia’s Eyre Peninsula,” he said.

“The rains also fell too late for many in central and northern New South Wales, with expectations for the state to harvest its smallest winter grain crop in 10 years.”

Mr Charteris said Victoria and northern Tasmania had continued to experience a good season, while storm activity in northern Queensland had raised hopes of a decent wet season.

“For Victoria, the weekend’s major rain event fortunately looks to have had less negative impact on crops than had been anticipated, with the heaviest rainfall focussed on predominantly grazing country in the north east of the state. However, horticulture in the northern part of the state will experience some negative impacts as a result of the large volumes of water,” he said.

Mr Charteris said southern Queensland had benefited from good rainfall in recent weeks, and this was boding well for summer crop prospects.

In line with the improvement in general sentiment across Australia’s agri sector, farmers were also more positive about prospects for their own farm incomes in 2018.

Overall, 32pc of farmers reported they were expecting higher gross farm incomes in 2018, up from 25pc with that view in the previous survey. A further 45pc were expecting their incomes to remain stable.

Dairy farmers, in particular, had positive expectations about income, with 51pc anticipating an improvement. The drop in global sugar prices from last year’s highs continued to weigh on sentiment in the sugar sector, with 41pc of sugarcane producers expecting incomes to fall over the coming year.

Mr Charteris said there was little variability between commodity sectors, however, when it came to investment intentions, with plans for investment at robust levels across the sector.

“Overall, 25pc of farmers across the country are looking to increase investment in their farm businesses over the coming year (up from 22pc in the previous quarter) while a further 67pc are looking to maintain investment at current levels” he said.

This had translated into strong on-farm investment in livestock and grain storage infrastructure, as well as demand for rural property.

Mr Charteris said the “appetite for land” was strong, particularly for high-quality grazing and dryland properties, which had driven up land values and reflected the bullish outlook for agriculture.

Across Australia, farmer confidence rebounded in all states, after ‘taking a hit’ last quarter.

The strongest sentiment was reported in Victoria, Mr Charteris said, with favourable seasonal conditions underpinning expectations of an above-average winter crop, although there had been significant frost damage incurred in recent weeks.

“The biggest turnaround in sentiment was seen in Tasmania, and while this is largely driven by commodity prices, those in northern Tasmania are also enjoying a good season. However, it remains unseasonably dry in the south and east of the state,” he said.

“Since October, there have been some good rainfall events and while it was too late to materially improve winter crop yields, it has improved summer crop prospects and also been welcomed by graziers,” he said.

“And in northern Queensland, isolated storm activity has provided encouragement that this year might finally be a decent wet season.”

In Western Australia, there is a “sense of ‘relief”, Mr Charteris said as “the season has turned around and farmers have had a reasonably wet and soft finish, which has seen grain yields come in better than expected.

“South Australia also had a late break, but it came too late on the Eyre Peninsula, which has had a very tough year.”

Confidence up in all sectors

Confidence levels were also up across all surveyed commodity sectors, with the biggest upswing reported in the beef and sheep sectors.

“You only need to look at the prices and clearance rates that are being achieved at bull and ram sales to see the sentiment still prevailing in the livestock sector, with lamb and beef prices strong for a number of years now, as well as the recent resurgence in the wool market,” Mr Charteris said.

“Confidence levels among grain farmers also improved, although grain sentiment still lags well behind that of beef, sheep and dairy producers. This isn’t surprising, with the winter crop forecast to come in below earlier season expectations and frost events also having a negative bearing on yields in some areas,” he said.

“While the forecast smaller Australian crop has not supported higher global wheat prices because of strong supply elsewhere in the world, local supply concerns are supporting a strong basis for wheat and local feed prices. In contrast, lentil prices have taken a hit, down 39pc year-on-year.”

For cotton, where confidence had also picked up, Mr Charteris said prospects for the 2018 crop had been bolstered by October rainfall.

“Although, unless there are good rains over the next few weeks, there will not be the moisture profile to support a big dryland plant,” he said.

“However, irrigated growers have the water to fulfil their planting intentions and the 2018 national crop is forecast to come in around 4.3 million and 4.5 million bales.”

In the sugar sector, Mr Charteris said, although confidence had climbed from last quarter, sentiment remained well below levels seen a year ago.

“The harvest is progressing pretty well, and despite some stoppages because of recent rain, mills are starting to wrap up the season,” he said. “However, it is the market outlook that is curbing sentiment with an abundance of sugar on the market. That said, the fundamentals point to an improvement in global sugar prices in 2018.”