Can we feed the world without wrecking the planet?

OXFORD University Professor Sir Charles Godfray believes agriculture will be able to meet the food demands of the world into the future and do it in a sustainable way. 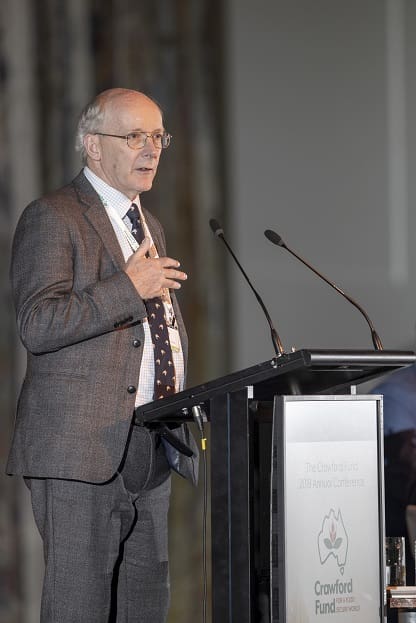 Speaking at the 2019 Crawford Fund annual conference in Canberra yesterday, Professor Godfray said he was “cautiously optimistic” humankind could continue to feed itself despite the global population soaring into the billions and the fragility of the earth’s resources.

He said there were grounds for hope that the world would avoid a tipping point where global food demand exceeded the planet’s capacity to produce enough food.

“I’m 60. I tell my students I am more optimistic now that we can feed the world than when I was their age. That’s partly because 30 years ago there wasn’t an intellectual argument against what Thomas Malthus pessimistically pointed out at the end of the 19th Century that population growth would, at some stage, overtake our capacity to feed the global population,” he said.

“What we have discovered in the last 30 years is that if we bring people out of poverty, provide access to reproductive health care and educate children, especially girls, fertility naturally goes down. Population growth rates are decelerating as more countries go through the demographic transition.

“We can now conceive of a time when the demands of humanity on the planet to produce food will plateau or go down. To me, that’s game on.”

Professor Godfray said while there would be billions more people needing to be fed than existed today, he believed it was possible to feed that many people without despoiling the environment, but only if world leaders and agriculturalists took the hard decisions to address the issues.

“It will be in the face of challenges we didn’t know about 30 years ago, such as climate change. Even more recently, we live in a more geo-politically fragile world than we thought we did. The world is a far more dangerous place than it was 20 years ago,” he said.

“We know a lot of what we have to do. The challenge is doing it. We know we have to change diets. That includes eating less meat, which is a very difficult conversation to have.

“We know we have to have to craft the governance of the global food system so it provides resilience and works for the poor as well as the powerful.”

Professor Godfray said the grain industry would continue to play a critical role in meeting the growing food demands of the world’s population.

But that would only be achieved if the industry continued to adapt and take advantage of new opportunities.

“We need to produce grain more efficiently and we need to have new varieties that are resilient to what the new world will throw up to us,” he said.

“The research on salt resistant wheat that is coming out of Australia is fabulous and will have global implications.

“I guess it’s just a matter of continuing the old agenda of improving productivity, but bringing in the environmental side as well. We need to breed not only for productivity but resilience and efficiency as well.