THE Chinese Government has banned shipments of Australian barley from Emerald Grain in a move which is expected to further impact importers in China and processors who have been exporting malt. 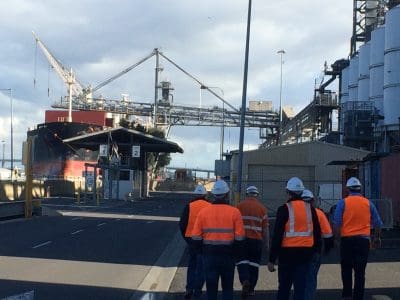 Emerald Grain is unlikely to load any barley for China at its Melbourne terminal in the near future following weekend developments. File photo: Emerald Grain

Emerald is now the second Australian shipper to have its barley exports banned from entering China following the suspension of CBH Group barley sales in September.

China introduced a hefty tariff on Australian barley in May, and since then, only a few cargoes have been booked to China to supply barley to maltsters which sell malt into the export, rather than the domestic, market and have therefore been able to avoid the tariff.

Emerald Grain chief executive officer David Johnson said the company had shipped and discharged two cargoes of barley to China, one each in September and October, since the tariffs were introduced.

Mr Johnson said the second vessel finished discharging in China around two weeks ago, and a telephone call on Saturday from the Australian Department of Agriculture notified Emerald of China’s suspension.

“Brome grass was mentioned, but we have no knowledge of any level or which vessel.”

The department has told Grain Central it was notified by the General Administration of Customs of the People’s Republic of China (GACC) on Saturday of the detection of quarantine contaminants in several consignments of barley exported from Australia, and that Emerald Grain had been suspended by GACC due to “multiple non-compliances”.

The department is working with the exporter to investigate and will respond to GACC.

Australia has strict protocols in place around phytosanitary requirements for importing countries. Mr Johnson said he had no reason to believe either cargo breached accepted levels of any foreign material.

“Levels in our shipping samples were negligible and within tolerances.

“This is a way of cutting off that malt barley to maltsters who had the ability to export malt.

“They’ll be paying a bucketload over there for malting now.”

Tight old crop stock and government bans have closed the malting barley trade between Australia and China for the moment even though processors and importers are keen to buy and the price is right, the execution risk now puts it out of contention.

The likelihood of any Australian exporters booking new-crop barley business to China in the near term appears slim.