The Criminal Code Amendment (Agricultural Protection) Bill will amend the Criminal Code to introduce two new offences relating to the incitement of trespass or property offences on agricultural land, using a carriage service (primarily the internet).

The offences carry penalties of up to 12-months or five-years’ imprisonment, if found guilty.

Attorney-General Christian Porter has described the Coalition Government’s new laws as the next step in protecting farmers from groups and individuals who disseminate personal information to encourage others to trespass and/or damage property on agricultural land.

The Bill passed the Senate with support from Labor and the crossbench, after amendments from the Coalition Government were added which largely reflected the Opposition’s concerns about press freedom and whistle-blower protections.

It then returned to the Lower House where it also passed, late yesterday and will now be presented for Royal Assent through the regular process, Mr Porter and Agriculture Minister Bridget McKenzie said.

Mr Porter and Senator McKenzie said the Bill’s successful passage was “an important safety measure for Australia’s dedicated farmers, most of whom are small businesses”.

Senator McKenzie said the new offences introduced in the Bill were not directed at people who “simply wish to engage in public discussion or debate about agricultural practices or legislation”.

“Rather, the Bill targets the conduct of those who go well beyond that, those who have an intention to incite others to commit unlawful trespass or other offences in the homes and on the lands of our farmers,” she said

Senator McKenzie said the Bill had benefited from scrutiny by the Parliamentary Joint Committee on Human Rights, the Senate Scrutiny of Bills Committee and the Senate Legal and Constitutional Affairs Legislation Committee and the Government’s amendments responded to concerns raised by media stakeholders.

“These concerns were that journalists would be unintentionally impacted by the provisions within the Bill,” she said.

“The amendments, as introduced by the Government, will remove any doubt that journalists are excluded from these offences and provide that the evidential burden resides with the prosecution.” 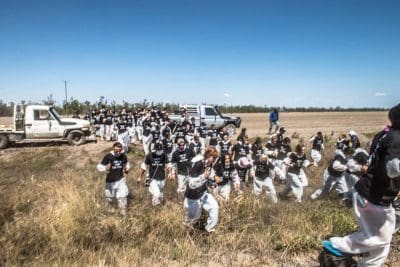 But she said the new offences will not apply to news reports from journalists in their professional capacity and in the public interest.

They also won’t apply to those who utilise lawful channels to raise concerns about animal cruelty and other criminal activity where it exists in the agricultural industry, she said.

“We don’t want to see negative animal welfare outcomes at all,” she said.

Senator McKenzie said “legitimate animal welfare concerns” must be reported to the “appropriate authority” to deal with.

“But that does not mean you have a right to incite violence and harassment on other Australians, their businesses and the animals that they actually care for,” she said.

“This Bill will make sure that those who seek to incite Australians to go on-farm to harass, intimidate and trespass will be subject to up to five years in jail.

“The Greens are calling anyone who supports this Bill – which is most of the Senate, bar the Greens – ‘fascists’, when the Greens political party, and those who support it and Animals Australia and Aussie Farms and all those who engage in this militant action, think it’s okay to disregard the law, harass and intimidate people and kill stock.

“That is actually the definition of fascism.”

National Farmers Federation chief executive officer Tony Mahar congratulated the Coalition Government for its “decisive action” on introducing the Bill and the delivery of an election commitment to better protect farmers from illegal trespass activity.

“Our farmers already face significant challenges, from the vagaries of the weather to commodity price fluctuations, pests and diseases,” he said.

“Farmers should not have to contend with trespass activity, harassment and intimidation, theft or damage to their property.

“We are delighted that this legislation has been passed and recognise the expediency with which it was dealt.”

Mr Mahar said the Bill sent a clear signal to anti-farming activists that the invasion of farms and harassment of farmers, their families and workers, running lawful businesses, would not be tolerated.

“The NFF supports the right of individuals to engage in lawful and respectful protest – unfortunately many anti-farming activists have chosen to express their views by trespassing, harassing and putting at risk the safety of farming families, their workers and their livestock,” he said.

The Law Council of Australia welcomed changes to the laws, through the amendments, to ensure media freedoms are better protected.

“The amendments strengthen the protections available to journalists under the legislation by removing the requirement that a journalist must prove disclosure of ‘offending’ material was in the public interest,” he said.

“The Law Council is pleased the responsibility of the media to report on matters of public interest has been recognised through the amendments.

“The press must be able to report freely on matters that impact Australians and adequate legislative protections are essential.”

The new laws were initiated due to fears about escalating animal rights campaigning throughout Australia – including mass farm invasions by activists, livestock theft and damage – accompanied by online coverage through live streaming and other media.

This intensification followed the internet publication of a controversial map by animal rights group Aussie Farms earlier this year, revealing the contact details and private information of farmers and related facilities such as abattoirs.

The map’s publication sparked intense outrage from farmers and farm representative groups and ignited calls for the Federal Government to introduce tougher penalties due to concerns about the lack of action or sufficient penalties and deterrents, from State jurisdictions.

In response, the Federal Coalition committed to introduce the new Bill, as an election commitment, to crack-down on illegal protesting activities such as trespassing which can cause severe consequences for animal welfare, such as biosecurity outbreaks.

Last week the Senate Legal and Constitutional Affairs Legislation Committee tabled a report from its inquiry into the Bill, making one recommendation, for the new laws be passed.

The Committee inquiry heard evidence from leading livestock and farm representative groups, with Mr Mahar saying farmers are experiencing “a surge in…antifarming rhetoric” and an increase in farm trespass events, most of which are coordinated online.

Australian Pork Limited tabled the results of a member survey conducted for the inquiry which found 41 per cent of the industry, by sow number, have suffered a raid by animal activists and 43 per cent of the producers have had images posted.

In its evidence, Australian Dairy Farmers provided examples of the heightened protesting, including: an incident on the Darling Downs where a farm was “stormed by 100 activists in March”; an incident on a farm in Warwick in April, where activists “opened the gates and let the cattle run wild on to the road”; and repeat incidents on a dairy farm in South Australia which included releasing cows, burning down a shed and damaging machinery.

The inquiry report said farming groups had stated that existing legislation is “inadequate”.

“For instance, New South Wales Farmers’ Association (NSWFA) said that acts in NSW that criminalise trespass, such as the Enclosed Lands Protection Act 1901, the Crimes Act 1900 and the Biosecurity Act 2015, ‘actually haven’t resulted in prosecutions or even further investigations that might result in a prosecution’,” it said.

However, the inquiry also heard from chief antagonist and Aussie Farms executive director Christopher Delforce who said he would “certainly not” take down his group’s map, if the new laws passed.

Labor expressed general support for the intent of the legislation in the tabled report, but also called for the Bill to be “substantially amended to deal with the numerous significant unintended consequences”.

In a dissenting report the Greens opposed the Bill saying “we believe that, despite Government rhetoric, the motivation for this Bill is not to strengthen the right to safety and security of farmers and their families, but to weaken the rights of individuals and NGOs engaging in political communication that draws attention to the rights, or lack thereof, of livestock animals”.

The inquiry also heard evidence about biosecurity risks with the tabled report saying Aussie Farms had argued that activists are careful to avoid any contamination, wearing ‘single-use full-body coveralls and boot-covers’, and saying there’d not been ‘a single incident of a biosecurity hazard caused by activists’, but others raised clear warnings and fears for the safety of farm animals and workers.

“Australian Dairy Farmers Ltd agreed that foot and mouth was a strong concern, referring to research conducted by the CSIRO which estimates the cost of an outbreak to the economy could be around $50 billion over 10 years,” the report said.

“The Department of Agriculture submitted that ‘entry of unauthorised people onto properties breaches on-farm biosecurity and increases the risk of animal-to-animal, animal-to-human and human-to-animal disease transmission’, which is a threat to animals, farm workers and trespassers.

“This assertion was supported by the Australian Veterinary Association which told the committee that its support for the bill is primarily based on its concern about ‘the high risks to animal biosecurity and welfare that are involved with unauthorised entry’.”