LABOR was accused of lying over its national native vegetation law intentions and Federal Agriculture Minister David Littleproud was roasted over the Coalition’s inaction over ag visas at the National Press Club’s agricultural leaders’ debate yesterday.

Differences and gaps in the Coalition and Labor policies on native vegetation clearing laws and ag visas were highlighted in the debate between Agriculture Minister Littleproud and Labor’s opposition spokesman for the sector, Joel Fitzgibbon. 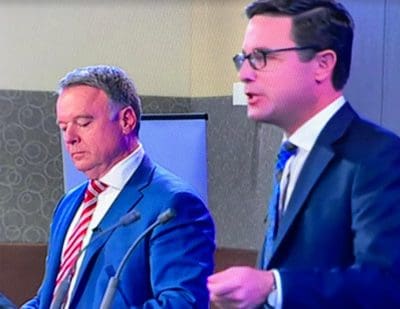 The pair faced off before the national media over a number of issues including clearing laws, ag visas, the Murray Darling Basin Plan and animal welfare.

Neither leader committed to compensating farmers for not undertaking land clearing when asked by debate moderator David Speers.

But Mr Fitzgibbon reiterated that Labor would exclude the agricultural sector from carbon targets and would spend $40 million to develop the methodology so farmers could earn revenue from the carbon market.

“The land sector provides the cheapest offsets, our farmers will be creating them when we get those methodologies right. This is the best defence to drought, building the resilience on-farm through the carbon market,” he said.

“We’ve also got a $100 million farm productivity and sustainable profitability fund which will help them build that resilience. We are not rolling out national laws on land clearing, but we are determined that lowest cost abatement remain available, indeed grows, in the market.”

However, Mr Fitzgibbon said a Federal Labor government would not hesitate to use the Commonwealth powers “when typically conservative state governments are winding back the clock and winding back land clearing laws that we’ve developed over a number of years”.

“So for example Queensland where our political opponents like to shout loudest on this issue, nothing changes, because we are satisfied that the laws in Queensland on native vegetation clearing generally are robust and acceptable,” he said.

“But again we won’t hesitate if conservative governments are doing the wrong thing and they have reckless native vegetation laws not consistent with our aspirations to tackle climate change both on mitigation and adaptation, and helping farmers build resilience then we won’t hesitate to move against them.

“This is not a change in policy – this was always the policy – the one you describe was a figment of the imagination of our political opponents.”

However, Mr Littleproud said the “real answer” to the question was that imposition of a nationalised approach to native vegetation laws was “effectively locking up the potential of agriculture”.

“You are taking away a farmer’s right for the stewardship of their land. We are saying that you are going to bank that carbon abatement and that credit in the government’s pocket, not the farmer’s pocket,” he said.

“They are not being rewarded for it, that’s what is going to happen.

“So if they haven’t done the work, they might need another three years in opposition to do the sums and come to the Australian people with it.

“Be honest that’s what is going to happen with vegetation management laws that they are going to impose right across this country.”

Workforce second only to climate change, drought and natural resources

Mr Fitzgibbon said the ag sector’s workforce was its second biggest challenge after climate change, drought and the natural resource base.

He committed to doing something about the ag visa issue “very quickly” but said it required a whole-of-government approach across many ministers. He attributed the Coalition’s fluctuating support for an ag visa to the issue’s complexity.

“I’m determined that given the opportunity, we will.”

Mr Fitzgibbon said he was examining the successful New Zealand tripartite approach to the issue, involving industry, government and unions.

“We have 10 backpackers to every Pacific islander, they have two to one, although the regulatory burden on the farmer is higher but it works for them.”

Mr Littleproud told the debate crowd he was on the record as supporting an ag visa, and despite an interjection from Mr Fitzgibbon that it wasn’t Government policy, the minister said the Prime Minister had made a commitment at the recent NFF Congress to work toward an ag visa.

“But you just don’t rush into it and have unintended consequence,” Mr Littleproud said, as his Labor opponent in the background held up six fingers, indicating the government had had six years to find a solution.

The Minister said over 200,000 people come into the country through Australia’s holiday visa program and the Coalition had extended it to two years, while the Australian Workers Union wanted to cut it back to one year.

“So what do you think is going to happen after the election when Bill Shorten takes the Lodge, God help us is he does, the reality is he is going to bring it back to one year and then our farmers are going to have to start to compete with other nations  like Canada and New Zealand.”

‘Leaving fruit on the vine’

Mr Littleproud said if Labor was allowed to tinker with the holiday visa system farmers would be forced to “leave fruit on the vine”.

He argued that the ag visa issue had to be addressed calmly and methodically to protect Australians and also “get the fruit off when we need to”.

He said there would be an ag visa if the Coalition was re-elected – “so long as we can get it to the point that the science proves it”.

“Yes we will, because that’s why we have invested in the last budget over $3 million dollars in a workforce planning model.”

Mr Littleproud told debate moderator David Speers there needed to be an understanding of “exactly where the pressure points are in the agricultural sector to make sure we can manage it”.

There will be a Labor policy on the issue, although “no-one can tell me what an ag visa is”, Mr Fitzgibbon said.

But he said the issue needed a fresh approach and flexibility, potentially allowing multiple re-entry of trained workers.

“I would like that, but unlike David (Littleproud) I’m admitting that we don’t have a fixed policy position because they’ve had the resources of government and haven’t been able to land somewhere and I’m not going to try to do it from opposition, but he just can’t stand there and say he supports an ag visa but his Prime Minister is on the journey.

“His Prime Minister backed down from his commitment at the NFF Conference – he backed down within days from that.”