Property: No ceiling in sight for climbing ag land prices AGRICULTURAL land prices in Australia are set to continue to climb over the next two years with no peak in sight, according to a new report issued by Rabobank.

In its inaugural Australian Land Price Outlook, the agribusiness banker says while the overall rate of price growth is predicted to slow – impacted by weakening economic ‘tailwinds’ and current adverse seasonal conditions in parts of the country – there is still considerable upside ahead for agricultural land.

This is driven in the most part, the report says, by projected continuing high demand for agricultural properties, which in most regions will continue to far outstrip supply.

The comprehensive report – which incorporated a new approach to land-price analysis using Rabo’s own sales data for agricultural land regionally across Australia – found the national median price for Australian agricultural land was at a 10-year high, with particularly strong growth occurring over the past five years. 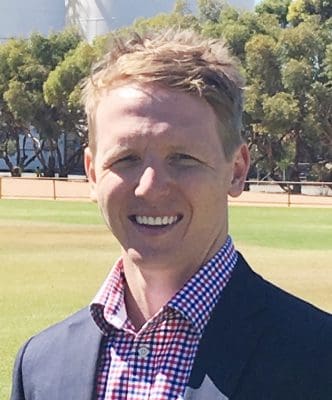 And the bank’s analysis – which reviewed both sales price data and property attributes such as productive capacity of land – showed that in most agricultural areas, demand for property purchases heavily outstripped the number of farms on the market.

“This is the driving force behind land prices continuing to move higher, and we consider this demand/availability imbalance to be the overarching driver as to why land prices will continue to increase over the next two years, albeit at a lower level of growth with a decrease of support from macro-economic fundamentals,” Mr Lefroy said.

By the end of 2017, the report found, the median price for agricultural land in Australia had risen to $2278/ha, at a compound annual growth rate (CAGR) of 2.5pc over 10 years.

On a state-by-state basis, the growth varied considerably, with prices in south-eastern Australia leading the way.

Tasmania and Victoria recorded compound annual growth of 4.9pc and 4.1pc respectively for that period, while WA agricultural land prices showed a CAGR of 0.7pc and Queensland 0.3pc.

“From a regional perspective, demand is heavily outweighing the number of properties on the market in many agricultural areas across Australia – although this varies significantly between and even within regions, driven by factors including the types and performance of commodities produced, production capacity and even localised competition bubbles,” Mr Lefroy said.

For example, on the Yorke Peninsula, in South Australia, prices had appreciated at 20pc compound annual growth rate over the past five years, with a premium for high-yielding lentil-producing land in central and northern parts. Although now with lentil prices trading in a lower, albeit still profitable, range, prices for this land appeared to be approaching peak.

The Central West in WA is another example where different localities have been moving at different speeds, even down to soil type. Prices of northern sand plain has been largely stagnant, while the loams in southern parts are in much higher demand, the report found.

Much of the growth in prices paid for farming land had been driven by rises in farmers’ operating profits, Mr Lefroy said, supported by positive macro-economic conditions for the agricultural sector.

“This growth has primarily come from broad-acre cropping and mixed livestock farms. Macro-economic conditions supported the increase in farm operating profit, with positive factors such as a weakening Australian dollar since 2013, the cost of finance being at record lows and a string of favourable seasons which elevated agricultural production,” he said.

At the same time, most agri commodities had traded in a profitable range – none more so than beef, wool and sheepmeat prices, which reached decade highs during 2016 and 2017.

Two factors indicate an outlook for continued strong demand for agricultural property in many regions, the report says.

These are strong balance sheets among farmers in a number of regions, encouraging expansion, as well as appetite for agricultural land among investors, keen for both capital and operational return and also as a mechanism for portfolio diversification.

“A rise in operational return for farms and growth in the capital appreciation of agricultural land has sparked an increase in local and global investor market entry. Investors value that the capital return of ag land is not volatile and generally not correlated with a range of other investments,” he said.

Despite this positive outlook, factors are at play to slow the rate of growth in agricultural property prices, the report cautions.

“Looking forward, we do expect the tailwinds from macro-economic fundamentals that have supported the growth of land prices to weaken,” Mr Lefroy said.

“The cost of funding for banks is expected to rise, so this would decrease the relative borrowing capacity for farmers. In addition, a fall in production across some major agricultural commodities, following a number of high-production years, will impact operating profits, particularly with the current dry conditions in eastern Australia.”

The impact of trade tensions between China and the US was also a potential ‘downside risk’ for the agricultural land market outlook.

The report says intense competition and higher prices are putting a greater onus on buyers to conduct thorough due diligence when considering property purchases.

“The first approach we recognise for this due diligence is a data-driven assessment of productive capacity of the land,” Mr Lefroy said.

This required not only analysis of price per arable hectare, but also an accurate assessment of price per unit of production relative to recent sales.

The second approach purchasers should be considering is the value of regional diversification, the report says.

“Business structures that are geared toward regional diversification have wider scope of properties to consider for purchase, enhancing their ability to buy land more suitably matched to productive capacity.”