CONSTRUCTION began today on a new intermodal transport interchange on Queensland’s Darling Downs that will link with the new Inland Rail line and has the potential to bring significant cost benefits to grain producers and exporters. 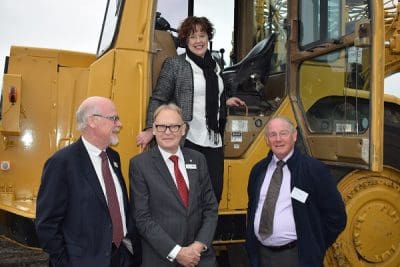 The InterLink SQ development west of  Toowoomba is funded by 83 predominantly local families and includes a three-kilometre frontage along the existing Brisbane to Charleville rail line and the proposed route of the Melbourne to Brisbane Inland Rail project.

In addition, it is at the junction of three major highways – the Gore, Warrego and New England – and is close to Toowoomba’s new domestic and international Wellcamp airport.

Buoyed by last night’s announcement in the Federal Budget of $8.4 billion in funding for the Inland Rail project, InterLink SQ general manager, Blair Batts, said the transport interchange had the potential to boost transport efficiencies for agricultural products, particularly grain.

“Grain is a commodity that is well suited to rail. In the southern states of Australia between 60 and 80 per cent of the grain is currently moved on rail. There is not that percentage in Queensland at present, but we are working very hard to change that both for containerised grain and bulk grain,” he said.

“The facility here will be set up for the receival of bulk grain containerisation, then the containerised grain will be transported to the Port of Brisbane.

“There are some issues around axle weights, but we are working very hard with above rail operators on innovative ways to be able to achieve the critical two full boxes of grain on a single wagon through to the Port of Brisbane.”

Mr Batts said the intermodal precinct would significantly reduce the cost of transporting grain to port for grain producers and exporters.

“We believe, through the modelling we have done, and particularly with the Inland Rail (project going ahead), that a reduction of $7/tonne is achievable. We believe that is a conservative figure at this stage,” he said.

Turning the first sod for the project this morning, Toowoomba mayor, Paul Antonio, said about 3.5 million tonnes of agricultural product were produced in the region, and at present a mere 180,000t of that is transported by rail. 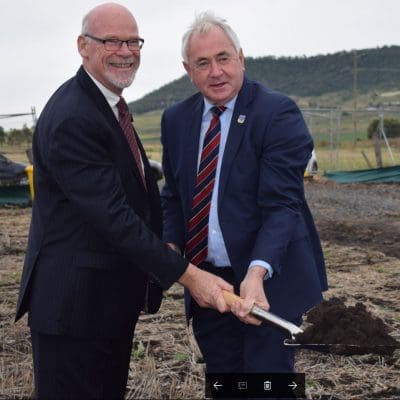 “When you understand that it is cheaper to take a B-double load of grain from Goondiwindi to the Port of Brisbane than it is to put it on rail, something needs to happen. When you consider that the freight task in this nation will treble in the next 20 years, something has to give. We just can’t keep doing it by road,” he said.

InterLink SQ outgoing chairman, John Dornbusch, said the construction phase of the project would bring $110 million worth of benefit to the region, and the operational phase a further $1.075 billion.

Once completed, the InterLink SQ project on the 200-hectare site 13 kilometres west of Toowoomba will feature an intermodal transport terminal, logistics centre and industrial precinct.