CONSUMERS and policy makers need to bear more of the burden faced by farmers and researchers with facing the challenges of feeding a growing population in a carbon-neutral environment, research heavyweights told the TropAg Conference on Tuesday.

The panel of industry leaders agreed that producers and researchers alone can’t solve the seemingly insurmountable task of producing food for a projected 10 billion people by 2050, in a carbon-neutral way and with the expanding impacts of climate change.

Through Olam Agri, Mr Verghese is involved with Australian-based companies Queensland Cotton and FTA, as well as almond orchards and pulse-processing and storage facilities.

He said policy makers, alongside privately owned companies and consumers, will need to drive the change needed to make farming sustainable as well as increase food production.

He said “mother nature is subsidising us” with the current global environmental cost of producing wheat, soybeans, corn and rice estimated at $1.37 trillion, higher than the farmgate value.

“These are the policy questions that we need to answer, and policy-makers are not picking up, not coming to the party and, therefore, we have a problem that looks unsolvable by any of our actions as researchers,” Mr Verghese said. 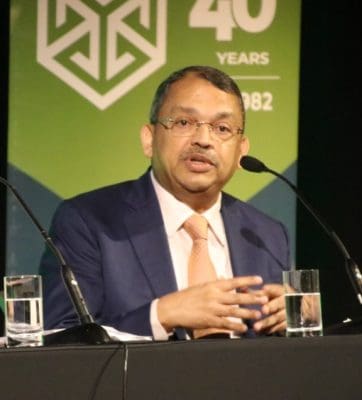 He said governments needed to increase partnerships with the private sector, which often have higher research budgets and can create more change within the supply chain.

“Studies have now shown that we only have 35pc of the technologies as we know it today to get to a more sustainable future and to get to net zero by 2050.

“I think relying on just government agencies and the scientific budgets of all the government sponsored research institutions is not going to be enough.

“I think amplifying the skills, expertise and ideas of government-sponsored research and institutions and forming those unnatural collaborations with the private sector, with corporations.

“Corporations have significant R&D budgets that dwarf at the global level the combined budgets of all government sponsored research organisations.

“They also contribute a significant chunk of the carbon.”

She said growers and producers, as business-owners, can be shifted by these economic policies.

“I think something we need to do…is revisiting subsidies and the pricing structures and subsidies keep up locked into certain patterns of production that dissuade what could be really exciting new opportunities,” Dr Sadoff said.

“[These are] policy levers that we haven’t made enough use of.”

Dr Sadoff said governments, the private sector and researchers also need to look at ways to change consumer behaviour and habits, which could bring benefits to producers and the environment.

“We need to socialise the ability to change and to open ourselves to different diets and ways of functioning.”

Mr Verghese said consumers will need to shift their “protein mix” as the demand for animal products grows in the coming decades.

“When you are trying to solve for the production gap, we have to be very clear in our minds about what are we shooting for and this is habits.

“Habits are very difficult to change.”

He said the current plant-based alternatives “don’t taste like the real thing” and will never gain traction with consumers unless more work is done on taste and texture.

Dr Sadoff said alongside food consumption, making better use of natural resources will have a massive impact on the sustainability of agriculture.

“There is mention of a circular economy; this is a mindset that needs to change.”

She said more recycled water needs to be used, mainly targeted for fibre-crop production and for outdoor uses.

She said using food waste and fecal matter to grow larve and insects for livestock feed and fertiliser production was another potential avenue for more research and development.

“This is one of the reasons as well that we need shift into much more integrated thinking and much more multi-sectoral spaces and put a lot more time and energy into the policy, economic and social side to free up these new ideas and change the way we do business.”

She said the increase uptake in no-till grain production and the use of methane as an energy source shows the willingness of farmers to change their practices.

“We have also transformed grain production, in terms of the selected weed-sprayer machine that literally saves millions of dollars over the years and much, much less chemical usage on farms,” Ms Simson said.

She said, with the increasing cost of production, these innovations are often making farming more efficient as well as sustainable. Ms Simson said these innovations are key when it comes to reaching the NFF’s farmgate value goal of exceeding $100 billion by 2030.

She said this vision will not and should not be reached by “doubling production”.

“Clearly, there is a production imperative, but in Australia we don’t envisage that Australian grain producers are going to grow double as much as crops.

“We have done that here already, what we are trying to do is go smarter not harder…and that is using data and using nature and climate change as a driver.”

The decision was part of a session titled Food security and food systems: transformation in the Indo-Pacific – the role for science.

Hosted by the University of Queensland, the TropAg conference was held at the Brisbane Convention and Exhibition Centre from October 31 to November 2.