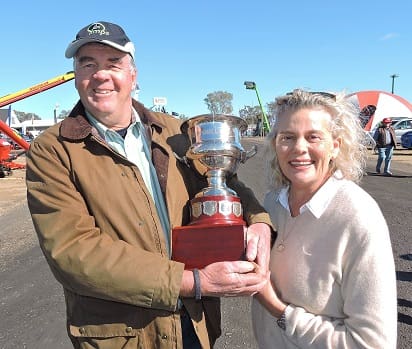 Liverpool Plains farmers, Ed and Fiona Simson, receive the 2019 Brownhill Cup at AgQuip on behalf of their family. Away from the farm, Fiona is kept busy as president of the National Farmers Federation. (Photo: Rob McCarron)

THE Simson family, who farm on the Liverpool Plains of north west New South Wales, have been awarded the 2019 Brownhill Cup for their sound farming practices.

With a multi-generational farming history of more than 90 years, the Simsons of Plantation Trading epitomised the award’s values of innovation and the adoption of farming practices which improve the sustainability, productivity and profitability of agricultural enterprises.

Led by Ed and Fiona Simson, with their children Tom and Jemima, and a team of committed staff, they are strong advocates of no-tillage, stubble retention cropping systems growing cotton and wheat, with a large area sown to sorghum each summer.

As a family business they operate 5000 hectares of country near Premer, cropping around 2000ha, with the remainder supporting Poll Hereford breeders.

The 2019 Brownhill Cup committee recognised that the farming family had shown “immeasurable passion, commitment and dedication to the pursuit of agriculture on the Liverpool Plains”.

“Plantation Trading has actively encouraged and participated in research trials with service providers and has supported the local agricultural community for many years.

“One of their greatest achievements may have flown under the radar, yet is apparent in the operation’s success from one generation to the next.

“They have quietly worked to tirelessly ensure the succession of farming within the family, as Richard Simson had in the past for his son Ed. 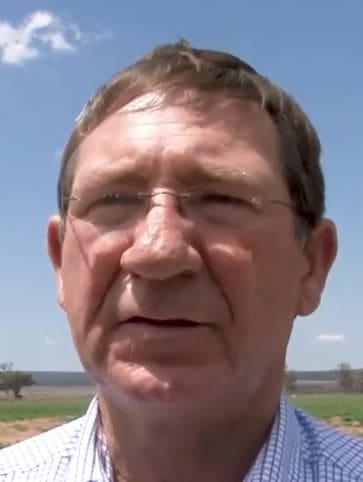 “The future of agriculture depends on families passing their knowledge and skills down to the next generation, and supporting the transition.”

The award was presented to the Simsons yesterday by the 2018 Brownhill Cup winner, long-serving Pacific Seeds identity Rob McCarron, at the AgQuip Field Days in Gunnedah, north west NSW.

Supported by landowners and the agricultural industry, the Brownhill Cup was donated by the Brownhill Family of Merrilong, Spring Ridge, as a perpetual trophy to encourage landholders to adopt conservation farming and efficient management practices.

The competition, which attracts broad community interest, began in 1983 as the Livestock and Grain Producers’ Association Soil Conservation Farmer of the Year held between Quirindi, Currabubula/Werris Creek, Pottinger, Gunnedah and Boggabri district councils.