LONG-SERVING guardian of the Nuffield farming scholarship program, Jim Geltch, has retired, leaving a lasting legacy for an organisation that continues to invest in the human capital of agriculture. 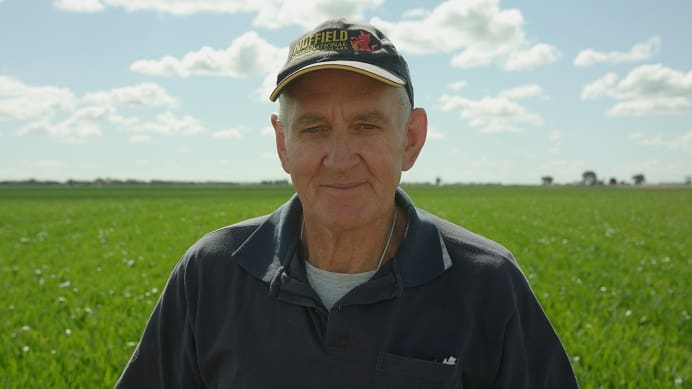 Quite an achievement for a farmer from the Riverina who was, himself, a Nuffield scholar in 1986.

Mr Geltch started farming in 1971 in the Murrumbidgee Irrigation Area at Whitton between Leeton and Griffith growing rice, row cropping and ultimately moving into tomato production.

This was to lead to him later taking up a position managing the Australian growing operations for New Zealand tomato processing company, Cedenco, which had set up a factory in Echuca in 1996. He ultimately sold the Whitton farm in 1999 to move to Echuca.

Today, with his wife Helen and two of their four sons, the family operates an irrigated cropping property in Victoria’s Echuca-Rochester region.

In 1985 Mr Geltch began what was to become a long association with Nuffield when he was selected to undertake a scholarship in 1986 looking into farmer education, advances in irrigation technology and computer-based crop modelling in Europe and Israel.

“It was very different in those days. There were only two scholars a year. It revolved around the states. In 1986 there were two scholars from NSW and one from Queensland. The following year there was a scholar from Western Australia, South Australia and the Northern Territory. The following year one from Victoria and Tasmania. I was selected in 1985 to travel in 1986,” he said.

“At the time I was involved in the Murrumbidgee College of Agriculture, so my study was looking at vocational training in Europe and the United Kingdom.

“I also looked at computer-based crop modelling systems. Computers were just becoming a real part of agriculture in predictive systems. I also looked into irrigation technology which allowed me to go to Israel. It is a well-worn cliche, but it was a life-changing experience.”

Reflecting on his tenure at the helm of Nuffield International since 2008, Mr Geltch is particularly proud of the role he played in expanding the scholarship program to a wider range of countries.

“Nuffield International in 2008 had six constituent countries. In 2011 those constituent countries agreed to come together in a more formal sense and set up an agreement and a set of rules to work by. The idea was to get more compatibility between the programs and leverage off the strengths of one another,” he said.

“The next significant thing was in 2014 when the international board said there was an opportunity to expand the organisation beyond the seven (the Netherlands had come on board in 2011) constituent countries.

“That was basically my responsibility. To that end we were able to select our first scholar from Brazil in 2015.”

Since taking on a full time role in 2016, Mr Geltch has further extended Nuffield’s reach, signing up Brazil, Chile, the United States and Japan as associate countries.

“Although there are only six from the US, the tipping point is there and we have a very strong governance and management system in place there.

“In due course, those countries will apply to become constituent countries once they can demonstrate a financial and administrative capacity.” As a mentor for the many young agriculturalists who have passed through the Nuffield program, Mr Geltch said he saw Nuffield not so much as a leadership program, but moreso a capacity building program.

“Through the scholarship experience we allow people to fully utilise the capacity they have. That will ultimately manifest itself into leadership roles within agriculture at different levels, not always agripolitics. It might be at a regional level or a national level,” he said.

He is proud of Nuffield’s record of producing scholars who go on to perform leadership roles across the board in agriculture, including agripolitics, farming bodies and research and development.

“We have people who sit on GRDC panels, advisory panels like GrainGrowers and various cropping groups,” he said.

“GRDC continues to significantly invest in the Nuffield program. They recognise that scholars have a global view and have seen how the grain industry operates in other countries. They come back and can be significant change merchants, both by advocating and also demonstrating in their own businesses that changes are necessary to retain viability and sustainability in farming.” There would be few people better qualified to hold a world view on agriculture than Mr Geltch.

In his long experience, he has found the most important factor governing the success of any form of agriculture throughout the world is the people.

“Successful businesses are based around good people and strong management teams,” he said.

Aligned with that, another crucial element of any nation’s agricultural success is to have to an internationally competitive advantage in some way, shape or form “because it is now a global village”.

He cites as an example Chile which last year became the largest exporter of fresh fruit into China.

“When you think of a population of 18 million people boxed between the Andes, Pacific Ocean, the Antarctic and a desert in the north, what they have been able to achieve is extraordinary,” he said.

“Their international competitive advantage is some excellent soils and climate, but there is also a well-educated agricultural management fraternity coupled with cheap labour.

“That in itself raises significant concerns. There has been significant social unrest in Chile across the country. So, although they have an internationally competitive advantage, therein lies the rub. How long can that be retained?”

Mr Geltch singles out Zimbabwe in southern Africa as an example of a nation with untapped and rising potential.

“Again, they have wonderful climate and soils and still some good management skills. Some of the diaspora of Zimbabwean agriculture are returning to Zimbabwe (following years of political upheaval), but what they are lacking is capital. The whole country needs to be recapitalised,” he said.

“Once they get political stability that will allow external capital to come back into the country, they will have a significant international competitive advantage.”

Mr Geltch said Australia had many competitive advantages, although they had been diminishing over the last few years – “our terms of trade attest to that”.

“We obviously have a highly educated farming cohort. That is where Nuffield is and will play a significant role. That has allowed us to retain an internationally competitive advantage,” he said.

“Our isolation and quarantine are another significant advantage.

“But, I think as time goes along, farming businesses are now moving from traditional farming operations relying on one or two people managing the business into larger organisations that have the capacity to ‘corporatise’. They might have boards that govern the business and excellent managers to manage the business. We are seeing more and more of that.”

Mr Geltch said the capitalisation of Australian agriculture was being maintained by capital coming in from both outside and within Australia.

“We are seeing things like pension funds from overseas and super funds within Australia starting to see agriculture as a good haven for funds, although the long term return is low. The particular time and environment we are in now (the COVID-19 crisis) will further strengthen the status of agriculture in terms of being an investment home.” Nuffield scholars in Sydney in 2011.

Among a long list of achievements, in 2001 Mr Geltch was awarded an Order of Australia (AM) for service to primary industry in the field of irrigated agriculture and promotion of agricultural research and education.

In 2018, he was also awarded the ‘Rabobank Leadership Award’, recognising the “fundamentally important” role he has played developing upcoming leadership in the Australian and New Zealand food, beverage and agribusiness sectors.

“Jim epitomises what Nuffield stands for, with a passion, work ethic and determination to see this organisation develop to offer even more young agriculturalists the opportunity to travel the world studying a topic of relevance to their industry,” he said.

“He has always been driven to develop and inspire leadership in individuals in agriculture and sees Nuffield as a highly regarded network of leaders whose insight is sought around the world. He leaves an indelible impact on all Nuffield scholars he has fostered over the past 15 years.”

Moving into retirement, Mr Geltch will continue to be involved in the family farming business at Echuca.

In his spare time he hopes to pursue his historical bent, collating many of the photographs he has taken over the years and furthering his research into Australia’s wartime history.

“I have been fortunate to take scholars through the Western Front a number of times. The Nuffield scholarship is more than just about agriculture. It is about growing capacity. One small part I’ve played has been awakening some young Australians’ respect for what happened between 1915 and 1918 at Gallipoli and the Western Front,” he said.

“That has been a passion of mine and hopefully I will get to do more research and reading on it.

“Also, with my own photographs and information I’ve collected I’d like to pull some history of Nuffield together. When people have played a role I think it is important they pull together for future scholars information on where the organisation came from. We have had some really significant people who have played a really important role. “

Another of his passions is playing cricket in the over 60s local competition, a pursuit that recently saw him play for the Australian over 70s side in New Zealand. 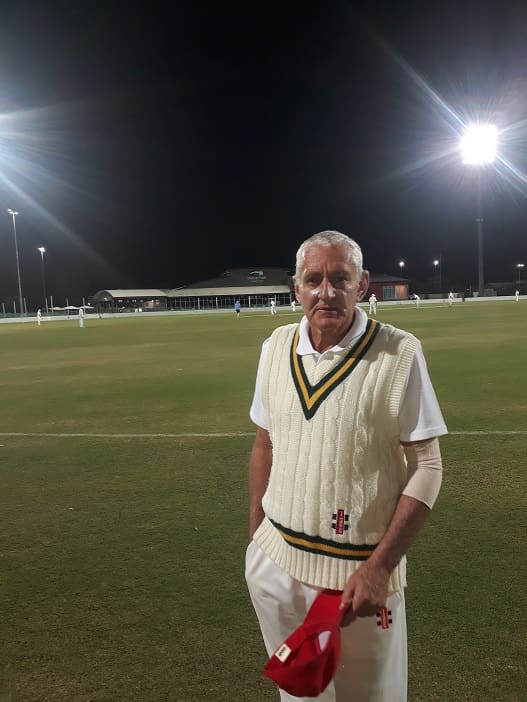 Jim Geltch continues to be a deft hand at cricket, recently playing for the Australian over 70s side in New Zealand.