Western Australia’s Commissioner for Soil and Land Conservation Cecilia (Cec) McConnell will take on a new role leading agricultural research and development at the Department of Primary Industries and Regional Development (DPIRD).

Ms McConnell has been appointed the Deputy Director General of Primary Industries Development, commencing in the position later this month.

DPIRD Director General Terry Hill said Ms McConnell had been an important part of the department’s executive team since 2020.

Prior to becoming commissioner, Ms McConnell ran her own consulting company providing business development, planning and natural resource management (NRM) advice and held board director roles, including with Wheatbelt NRM.

She previously held senior leadership roles with the Department of Agriculture and Food, including as a regional director based at Northam.

“I am excited to take on this role and look forward to working with the department’s Primary Industries Development team, our research partners and the agricultural and aquaculture industries,” Ms McConnell said.

Grains Australia interim chief executive officer Andrew Young said the Wheat Council will play a critical role in guiding Grains Australia’s strategic direction by providing advice to the Board on behalf of the Australian wheat industry.

“The Council will assist Grains Australia to not only oversee Australia’s wheat classification system but also identify wheat industry trade and market access priorities and requirements for wheat market information and education.”

Appointments to the Grains Australia Wheat Council were made following an open expression of interest process and review of all applications by a Selection Panel.

The Wheat Council is one of several Commodity Councils being established by Grains Australia to advise the Board on behalf of individual grain commodities including barley, oats, oilseeds, pulses and wheat.

Appointments to Grains Australia Commodity Councils are for a period of two years, with the option to be extended for consecutive terms for a maximum of three terms. Ms Gall is based in the Gwydir Valley and comes to the role with extensive experience delivering major irrigation and water use efficiency projects, working with primary producers across multiple regions and industries.

CottonInfo Program Manager, Warwick Waters said Ms Gall was well known in the industry for her expertise in irrigation, and especially her coordinating role within the Smarter Irrigation for Profit program.

“Her experience and understanding of irrigation will allow Lou to hit the ground running in working with growers and advisors to continue to achieve positive water use efficiency outcomes within our industry,” Mr Waters said.

“Lou already had a major involvement in a recent trial that examined the efficiency of bankless channel irrigation systems at St George, so she is a familiar face to growers and the CottonInfo team.”

The technical lead position is funded by the Cotton Research and Development Corporation and works on a range of activities that help connect growers with research and innovation.

Incitec Pivot Limited (IPL) has announced the appointment of Michael Carroll as chairman designate of the proposed standalone Incitec Pivot Fertilisers business, should the structural separation of the fertiliser and Dyno Nobel operations proceed.

IPL chairman Brian Kruger said that the intended ensured that the Incitec Pivot Fertilisers board would be led by an experienced and highly regarded non-executive Chairman.

“Michael has extensive financial, agriculture industry and governance experience in a non-executive director and executive capacity which would be a valuable addition to the board of Incitec Pivot Fertilisers,” Mr Kruger said.

Mr Carroll had an 18-year executive career with the National Australia Bank (NAB) including as General Manager of NAB’s Agribusiness Financial Services where he was responsible for creating and leading the bank’s Agribusiness division.

The finalists have been announced for the Australian cotton industry’s most prestigious awards in 2022 with entrants from New South Wales, Queensland and the Northern Territory in the running.

Cotton Australia chief executive officer Adam Kay said nominations were opened earlier this year and the response has been outstanding.

“Each year we have been impressed with the calibre of nominees and this year is no exception, presenting a challenge for judges in making their selections,” Mr Kay said.

The Awards finalists are:

Bayer Grower of the Year:

Cotton Seed Distributors Researcher of the Year are:

The judges will now review all nominations before finalising the winners, who will be announced at the Awards dinner held in conjunction with the Cotton Conference. Professor Beckie has worked in the field of herbicide resistance for more than 30 years and has been leading AHRI research as director since 2018.

“It has been an honour and privilege to have served as AHRI director and to help advance the goal of AHRI – more crop, fewer weeds, sustainably,” Professor Beckie said.

AHRI is a national initiative based at UWA with major investment from the Grains Research and Development Corporation (GRDC).

“Hugh Beckie has used his extensive skills and knowledge to champion the cause of integrated weed management and has brought strategies to our sector that help manage the resistance threat and protect yields,” Mr Woods said.

Professor Beckie will continue in an advisory role for AHRI while a new director is recruited. 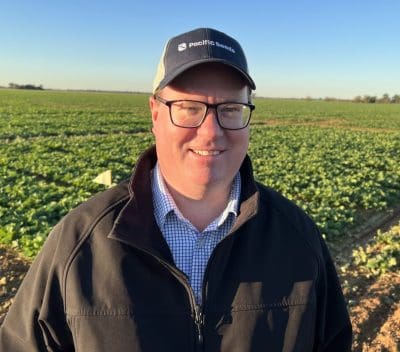 Pacific Seeds has announced the appointment of Dan Rolls as the new territory manager for central, east and western districts of Victoria.

Mr Rolls has more than 15 years of experience working with growers and agronomists across the region helping to maximise productivity through quality products, precision agricultural technology and an understanding of local farming conditions.

He and his family are based in Ballarat and he is looking forward to working with you to continue the great service you expect from the Pacific Seeds team.

Mr Rolls will be travelling across the region over the coming months to meet with agents, agronomists and growers and will also be attending a number of local field days.

Ms Maas will join the CRCNA team part time as part of a six-month secondment from the Cotton Research Development Corporation (CRDC), where she is a senior research and development (R&D) manager.

“I’m excited to welcome Susan to the team to work on an exciting and innovative R&D program,” Ms Stünzner said.

CRDC executive director Ian Taylor said Ms Maas’ secondment was the latest development in a partnership between CRDC and CRCNA.

“We see our partnership with CRCNA as crucial in helping us achieve this goal, and are pleased to be able to enhance the northern research effort through our investment in the CGC project, and our support of Susan’s secondment,” Mr Taylor said.

“Susan brings enormous expertise in cotton research, and a strong passion for the north, to her new role with CRCNA, which she will complete part-time while also remaining a core member of CRDC’s R&D team.”

Applications are open for the Australian Rural Leadership Program (ARLP).

The ARLP is the flagship program of the Australian Rural Leadership Foundation (ARLF) and is the most in-depth experiential leadership development program on offer in Australia.

As part of the program of 30 diverse leaders from across rural, regional and remote Australia will come together for a series of unique and immersive experiences to develop their leadership capabilities.

“An ARLF Fellowship provides invaluable opportunities to connect and work with a professional network of over 2,000 peers across rural, regional and remote Australia,” Mr Linnegar said.

“Our goal is to develop leadership, so people act beyond themselves, work with others, and facilitate change in their organisations, sectors and communities.” Mr Skinner brings commercial acumen across finance and management, spanning Australia, the United Kingdom and the Middle East with his most recent roles were as regional CFO and regional managing director for Intertek Group plc, a UK-listed FTSE 100 quality assurance business services company.

WOA’s previous CFO, Tim Whyte, will remain with the company to support the finance team.

Mr Skinner said he is excited to be able to contribute to the future growth of WOA.

“After returning to Australia, I was attracted to WOA’s vision to reinvent the food and farming system through a dynamic and profitable business model,” Mr Skinner said.

Professor Rajeev Varshney has been selected to receive the 2022 International Crop Science Award by the Crop Science Society of America (CSSA) for his creativity and innovation in bringing significant change to crop science.

This award is based on evaluation of creativity and innovation through Professor Varshney’s contribution and professionalism to long-lasting changes in crop science practices, products and programs at an international level.

Each year CSSA honors and celebrates the achievements of crop scientists to recognise excellence and leadership in research, education, industry, and mentorship; and bestows the prestigious designation of Fellow.

Professor Varshney, who is also the Director of the State Agricultural Biotechnology Centre at Murdoch and the University’s international chair in Agriculture and Food Security, said he felt humbled and honoured to receive the accolade.

“What an honour to be selected for this award and I would like to thank my colleagues at Murdoch University and also at the International Crops Research Institute for the Semi-Arid Tropics (ICRISAT), my previous workplace and collaborators all around the world for their contributions, support and cooperation; and also CSSA for their recognition of our work,” Professor Varshney said. 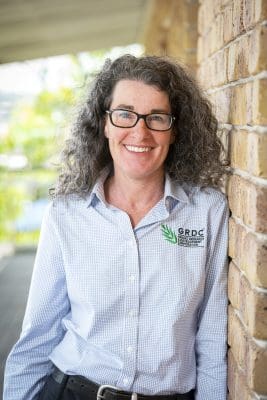 As an ag science graduate, Ms Green worked for the WA Government before moving to the Darling Downs, where she farms with her family.

Ms Green joined GRDC in 2017, and is based in Toowoomba.

“I’m looking forward to working more closely with growers in this role; both to better understand their production issues but also to help communicate and raise awareness of the enormous body of research that GRDC supports,” Ms Green said.

Mr Holzknecht has returned to the crop protection industry as general manager development and registration with ADAMA Australia.

Mr Stroud is the president of the Grain Industry Association of Victoria, and previously traded grain for Pearson’s Group of Swan Hill.

Former COFCO analyst David Munnis has moved into the trading role at Pearson’s.