After close to five years as chief executive officer and almost a decade with GrainGrowers, David McKeon has announced his resignation. 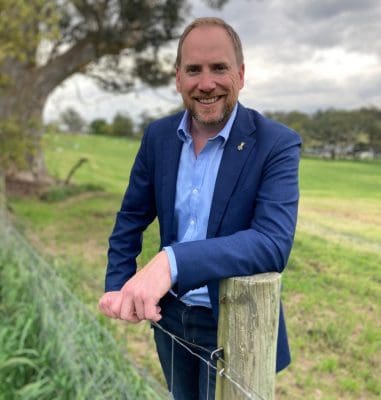 “I am proud to have led the organisation through a period of transformation that has seen us emerge with a clear focus on sustainability and profitability outcomes for growers,” Mr McKeon said.

Mr McKeon will be taking some time off before considering his next career move.

GrainGrowers’ chair Brett Hosking thanked Mr McKeon for his achievements during his time as CEO.

“On behalf of the GrainGrowers board, our members, and the staff, I would like to sincerely thank David for his passion and enthusiasm for the Australian grains industry that has been evident throughout his time with the organisation,” Mr Hosking said.

“David will be finishing with GrainGrowers in October and will continue to support GrainGrowers through a range of strategic projects for the remainder of the year to ensure the organisation continues to utilise his deep grains industry insights.”

The GrainGrowers Board will be conducting an executive search over the coming months.

Global investment manager of nature-based real assets and natural capital strategies, New Forests, has announced the formation of a new business division, New Agriculture and the appointment of four investment professionals to the team.

New Agriculture has been established to build a portfolio of agriculture assets, starting in Australia and New Zealand, and to manage the Lawson Grains 100,000-hectare aggregation.

Mr King joins with 20 years’ experience in the agriculture investment sector, most recently as the chief executive officer of Regional Investment Corporation in Australia.

Mr Pickles was most recently finance business partner – operations and investments with food company Kilcoy Global Foods and has held similar roles with some of Australia’s largest land and water holders including Hassad Australia and MSF Sugar.

Australian pasture researcher Max Shelton was presented with the AW Howard Medal on Tuesday at the 20th Australian Agronomy Conference in Toowoomba. 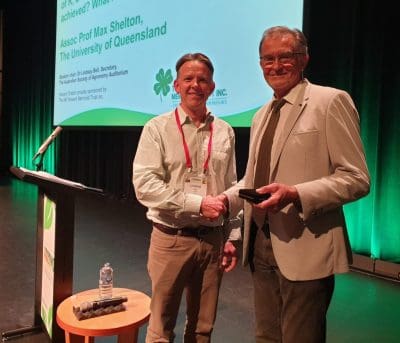 The medal – named after Amos Howard, whose 1889 discovery and subsequent use of subterranean clover as a pasture plant was critical to Australia’s agricultural development – is awarded biennially to a person who has made a significant contribution to the advancement of pastures in Australia.

Associate Professor Shelton’s greatest impact has been through his work on leucaena.

After completing his PhD, Associate Professor Shelton spent most of the 1970s working in Thailand and Laos, before going on to a global career spanning much of Southeast Asia as well as stints at the Universities of Oxford, Hawaii and Florida, and the Food and Agriculture Organization of the United Nations.

“Nevertheless, I’m deeply appreciative and it goes without saying that, as for any successful career, it has been a team effort.”

Mr Herrmann, who has been a RGA member since 1989, will be taking over from outgoing president, and Finley grower, Rob Massina, who held the position for three years.

He has a long family involvement and history in the Australian rice industry and is looking forward to taking over the reins of the organisation and hopes to build on the legacies of past leaders.

“I am committed to this important role in the rice industry and look forward to representing our members and their communities,” Mr Herrmann said.

Mr Massina said he wishes Mr Herrmann all the best in his new role as president.

“It has been a highly rewarding and at times a challenging role, however advocating for and representing rice growers and their communities has made it all worthwhile,” Mr Massina said.

“I cannot express enough thanks for what this wonderful industry has provided me in the way of learning and personal growth.”

Bayer has announced Warren Inwood will be the head of the Crop Science division in Australia and New Zealand (ANZ) from October 1.

Mr Inwood joined Bayer in 2002 as a global product manager based in Monheim, Germany.

He also held roles as market development manager – Asia Pacific and head of marketing for Australia.

“I am excited to lead this outstanding team that exemplifies Bayer’s long-term commitment to agriculture in Australia and New Zealand,” Mr Inwood said.

“I would also like to acknowledge Joerg’s invaluable contributions to Bayer over the past four years, which saw him lead us through significant transformation for our business.” Grain Producers of South Australia (GPSA) farewelled two longstanding board directors in Dion Woolford (Eyre Peninsula) and David Malpas (South East), who retired after many years of service, at the annual general meeting on August 29.

Elected as new board directors are Chelly Litster from the Yorke Peninsula and Dylon Kay from the Eyre Peninsula.

Directors John Gladigau, Nick Hillier and James Heaslip were re-elected to the GPSA Board.

GPSA said it is grateful for Mr Malpas and Mr Woodford’s service to the organisation over many years and looks forward to Ms Litster and Mr Kay’s contribution into the future.

In the role, which she will take up in November, Ms Hill will help farmers adopt practices that will assist them to adapt to a drying climate.

“This is a really positive appointment for the GGA that will add value to our expanding network of more than 60 grower groups and benefit producers in our region,” GGA chief executive officer Rikki Foss said.

“I am keen to make sure that the needs identified by farmers are addressed through the extension of research outcomes,” Ms Hill said.

Her appointment was made possible by Australian Government funding awarded to the Drought Resilience Adoption and Innovation Hubs, to enable them to employ adoption officers. Mr Conway, CEO of Boolah Farms – an integrated farm management, grain-handling and broadacre contracting business – established, the collaborative farming model (known as ‘co-farming’) in 2020, along with his wife Molly and Stuart and Lyndall Tighe.

This followed three years of drought in northern New South Wales, with the aim to “reduce production risks by giving smaller landholders access to scale and geographic spread”.

The co-farm model revolves around small to mid-sized “passive” landholders contributing their land into a joint venture, where operating expenses and profits are shared on a percentage basis.

Mr Conway, one of the 19 participants in Rabobank’s EDP, was presented with his prize at the program’s graduation lunch in Sydney earlier this month.

Chris Baker from Willawee, Yarrabandai, NSW was announced People’s Choice Winner thanks to his strategy to reduce farm debt through refining the enterprise mix and identifying key financial drivers.

AgForce General president Georgie Somerset has been re-elected to the position and Grains Board president Brendan Taylor will continue in the role following an annual general meeting on September 20.

Mrs Somerset, who has held the position since 2018 and had never been contested before, faced tough competition from AgForce Cattle Board president William Wilson, who threw his hat into the ring for the first time this year.

A beef cattle farmer from Durong, she said she was proud to be able to continue to represent AgForce’s 6,500 members and thanked them for their support.

“It is more important than ever that agriculture is valued as we navigate global pressures, biosecurity threats to our industries, and a climate conscious community,” Mrs Somerset said.

“Going forward, I am looking forward to serving our industry, and will continue to build connections between urban and rural Queensland.

Following his defeat, Mr Wilson will be standing down from the AgForce Cattle Board, with AgForce North Queensland Cattle director Peter Hall stepping into the role. The 2022 Bayer Cotton Grower of the year and the AgriRisk High Achiever of the Year were announced at the Australian Cotton Conference Awards Dinner on the Gold Coast last month, along with the ADAMA Chris Lehmann Trust Young Achiever and the Cotton Seed Distributors Researcher of the Year.

The Bayer Grower of the year is Nick Gillingham, Sundown Pastoral Co, with Tipperary Station’s Bruce Connolly, taking out the AgriRisk High Achiever of the Year award.

The farm consists of 25,000 hectares with 10,000ha under irrigation and half utilised for cotton each year in a 100pc rotation alongside 10,000ha is assigned to dryland cropping.

Tipperary Station is into its fourth year of growing rainfed cotton, quickly becoming the biggest grower of cotton in the Northern Territory.

The ADAMA Chris Lehmann Trust Young Cotton Achiever of the Year is Jessica Strauch from Goondiwindi.

Ms Strauch is a grower services representative for Queensland Cotton and is also a member of the Australian Future Cotton Leaders Program.

The winner of the Cotton Seed Distributors Researcher of the Year Award is soil scientist Oliver Knox who is the University of New England’s associate professor of Soil Systems Biology and CottonInfo technical lead for soil health.

Dr Knox recently released a new framework for soil health and is taking the research lead on cotton circularity with two projects scheduled for this year.

The winner of the Incitec Pivot Fertilisers Service to the Cotton Industry Award went to Bernie George, the water services and compliance manager at Australian Food & Fibre.

“Every person nominated deserves recognition here because they are all game changers in their own way,” Mr Kay said.

“These awards have shown me two important factors in our ongoing commitment to become even better at growing Australia cotton.

“We have the most experienced and intelligent operators who have already contributed decades to the industry while recognising some of our younger participants who are bringing a fresh approach to cotton farming.”