A SERIES of contractual shocks to Australia’s chicken-meat producers is casting a shadow of uncertainty over pockets of production as the expanding sector weathers a period of consolidation. 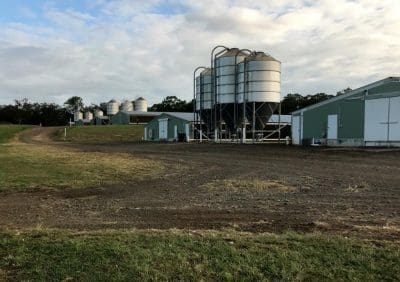 This broiler farm at Mongogarie in northern NSW is listed for $5.2m, and its modern sheds put it towards the top end of price expectations at around $28/bird.

Growth is being underpinned by a continuing climb in Australia’s per capita consumption of chicken meat, forecast this year to hit a record 47.7 kilograms, compared with a new modern-era low of 26.7kg for beef and veal.

However, the growth appears to be taking place in or near grain-producing regions, and at the expense of some producers in the peri-urban areas of Brisbane, Melbourne and Sydney.

Baiada and Ingham’s process around 80 per cent of Australia’s chicken meat, and farmer groups say producers with contracts to supply Baiada plants at Laverton near Melbourne, and Ipswich west of Brisbane, have been hit hard in the shakedown.

Victorian Farmers’ Federation chicken meat president, Allen Bullen, said the 16 suppliers to the Laverton plant were all impacted when its processing function ended in April.

“Around 12 of those are now earning alternative incomes through things like egg, duck and layer production, but that change comes at a cost.”

Less certain is the future for the 28 suppliers who have been growing birds for Baiada’s Ipswich plant, which is due to cease production in January.

Industry sources say Baiada’s closures are being offset by expansion around its existing operations at Griffith and Tamworth in NSW.

Ingham’s has told Grain Central it was building up volumes in its South Australian and Queensland operations, as well as roughly doubling its production in Western Australia over the next two years.

“Other than this significant expansion, we continue to support our operations in all our existing geographies,” an Ingham’s spokesperson said.

Prior to Baiada’s decision to close its Ipswich facility, Ingham’s had already allocated growth to its existing suppliers, and said its ability to take on Baiada growers was therefore limited.

“However, we will consider opportunities to do so where it makes sense.”

All expansions are taking place within or adjacent to grain-growing areas, and are fueling continued growth in national production at the rate of around 4pc per annum.

The biggest increase is coming from an expansion in South Australia, which has recently seen its share of national production rise from 9pc to 16pc.

NSW Farmers has recently pointed to tough times for some of its members who are supplying an independent Sydney-based processor.

“The issue is to do with margins,” NSW Farmers’ Association poultry committee chair, Justin Roach, said.

Mr Bullen said he believed the hike in grain prices caused by dry conditions in Queensland and much of NSW this year had eroded the terms of trade for processors operating in those states.

“One processor said feed was accounting for about 45 per cent of the cost per bird, and they were a lot happier when it was down at 36pc.”

He said these were compounding price pressure on the processors caused by fearsome competition in the retail sector.

“There has been a continuing price war that’s been going for a couple of years now and I believe Baiada has felt the effect of that.

“The processors have thrown the money to the supermarkets, and to keep viable, they’ve got to get money from elsewhere; that means we’re back to the grower.

“It is worrying times for the industry when farmers are being laid off. It’s always been a good reliable industry, and it’s far from that at the moment.”

The rule of thumb in Australian broiler economics has long been based on payment of $1 per bird, and five to six batches of birds per year. 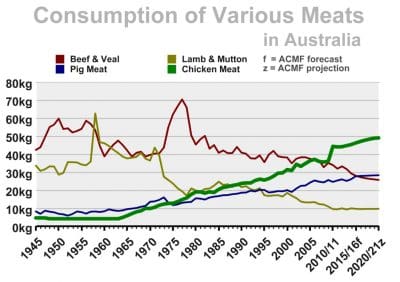 Mr Bullen said he believed contracts with major processors were now returning more like 88-93 cents/bird, and other sources have quoted prices closer to 80c.

He said the trend towards five instead of 10-year contracts, clauses which threatened contract security, and requirements in some contracts that farmers build new poultry sheds within the life of the agreement, had all made investors cautious.

“Building new farms and revamping old ones are huge costs; a lot of contracts are only for five years, and you’ll battle to pay for those improvements in that time.”

Poultry Farms Australia’s Toowoomba-based consultant, Peter Hicks, said banks were no longer lending up to 65pc of the cost of a poultry farm to investors “without a problem”.

He said earnings for most poultry farms before tax depreciation and amortisation (EBTDA) had fallen below the prevailing level of 8-12pc, and that meant banks were now looking very closely at wording on contracts relating to potential termination.

“I’ve had four sales that went belly up because one of the conditions of sale was an acceptable contract with the processor.”

He said farms with older sheds which would have sold for $2.4m prior to this period of contract uncertainty could now be down to $1m in value based on their real-estate worth alone, and those now without contracts have to repurpose their farms, or sell up.

“We’re talking about diabolical changes for some individuals; these people are not used to looking after marketing, buying birds, sourcing feed.”

Mr Hicks said one broiler farm in the Beaudesert region near Brisbane was recently reported at an “extremely high” $30/bird.

“It can be more like $21-$25/bird, but values depend on whether farms meet RSPCA conditions, what the terms of the contract are like, and how new the sheds are.

“In the past, prices have been stable at $30/bird, but not now; the whole industry might be in for a shake-up.

“We need to wait for 12 months for things to settle down.”

Baiada was contacted but was not available to comment.