Paraway Pastoral Company is selling its Laura Downs aggregation east of Coonamble, which has a winter-crop rotation based on wheat and chickpeas. Photo: CBRE

THREE aggregations with a cropping focus in north-central New South Wales are on the market as part of the Macquarie Group’s rejig of its agricultural investment portfolio.

Owned by Macquarie’s Paraway Pastoral Company, the aggregations cover 16,219 hectares, which comprise the 6077ha Bundemar Park and the 3365ha Paddy’s River north of Trangie, and the 6777ha Laura Downs, east of Coonamble.

All three aggregations were acquired by Macquarie from Hassad, a Qatari-owned entity which exited Australian agriculture last year, and are for sale by expressions of interest through CBRE.

As part of the rationalisation, Macquarie’s Viridis Ag has listed its Cummins aggregation in South Australia, and part of its Gindurra aggregation at Canowindra in NSW, both of which came into the Macquarie fold when it acquired a number of Hassad assets last year.

“Now that Macquarie has completed its takeover of the Hassad properties, the company has been able to determine which of them fall outside the scope of its mandate,” CBRE Agribusiness manager Richie Inglis said.

“That’s why these three aggregations have come to the market.”

Laura Downs was acquired by Macquarie as part of the Urawilkie aggregation, and CBRE Agribusiness director Col Medway said the highest and best use of the land is cropping, which is not the focus of Paraway, and this has prompted its listing.

“There’s still plenty of farming land within the Urawilkie aggregation that is being retained by Paraway,” Mr Medway said.

“Laura Downs is a dedicated cropping platform located on the southern boundary of the aggregation, providing the opportunity to the south of them, so Paraway has decided to divest this land with no operational impact on the land being retained.”

With Laura Downs included, Urawilkie has around 14,000ha of dryland farming country, 3300ha of improved pasture, and 8600ha of dryland grazing and buffer country.

The Urawilkie and Old Bundemar holdings as purchased by Macquarie each have a carrying capacity of around 40,000 DSE.

Laura Downs has 6476ha of clay loam cropping soils with some red loam ridges, and its improvements include more than 13,000t of on-farm grain storage.

The Laura Downs aggregation has an annual average rainfall of 605 millimetres and includes the Moonambil, Wexford, Polli Boomi and Black Hill titles, which run into the foothills of the Warrumbungle Range.

Maranoa is included in the Bundemar Park aggregation, which features 5609ha of cropping country with alluvial soils and self-mulching clays interspersed with loams. 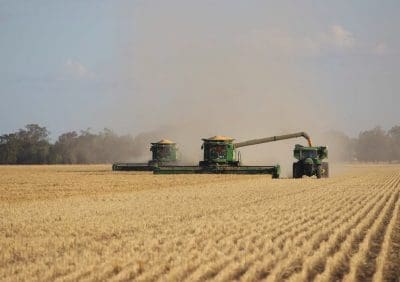 The Bundemar Park and Paddy’s River aggregations at Trangie are being sold by Paraway Pastoral Company. Photo: CBRE

The Bundemar Park and Paddy’s River aggregations have an annual average rainfall of 500mm.

Bundemar Park and Laura Downs use a cropping rotation based on wheat and chickpeas, with canola, faba beans and opportunity sorghum grown when s

Through access to the Greenhide Irrigation Scheme, Paddy’s River grows a small area of cotton on flood irrigation, and uses centre pivots to irrigate summer and winter crops.

Dryland crops are also grown at Paddy’s River, with chickpeas and wheat the winter staples, while native pasture and lucerne provide grazing.

Mr Medway said each aggregation was being offered in one line or as separate assets so all sectors of the market could participate in the process. The smallest property at 454ha is Gleneve, part of the Paddy’s River aggregation, and the largest at 4589ha is Bundemar Park.

Expressions of interest on the aggregations close on 7 March.