The new listing is under half the size of the full Cobran Station which originally came to market in October 2021. Photo Inglis Rural Property

The new offering, known as Cobran West, is under half the size of the 14,149ha original listing which came to market in October 2021.

Offers over $25 million will be considered for the holding which is located between Hay and Carrathool in the Murrumbidgee Valley.

“You have got the two supply channels from the Murrumbigee, two independent pump stations, excellent water storage, 3150ha developed for irrigation, as well as houses, sheds and accommodation,” Mr Triggs said.

He said Cobran West is an aggregation of two independent holdings offered in-one-line or in two parts.

Both holdings have separate access to the Murrumbidgee River with the potential to subdivide into two properties.

“This land could be sold in one line, or alternatively in two parts as there are separate pump stations on the river that service independent supply channels to the irrigation fields,” Mr Triggs said.

“In addition, there could be up to a total of 10,000 megalitres of Murrumbidgee general security water entitlements available for sale to the purchaser(s) of the land.” Mr Triggs said Cobran West has a strong production history, with over 200,000 bales of cotton grown in the past seven years, at an average of 12 bales/ha across the entire aggregation.

He said this production is “sustainably-grown cotton” with the operators using best practice methods to only crop about half of the arable land each year in a “half-in half-out” configuration.

Alongside cotton production, Cobran has also produced other summer and winter crops, such as corn, wheat and canola.

He said the property is also suited for a diverse range of enterprises from cropping through to livestock including scope to increase the broadacre irrigation development, potential to convert to a large scale horticulture operation or a vertically integrated sheep or beef feedlot.

“You can develop another 1oooha of country that is just old irrigation country…and you could change the land use to horticulture.

“The country is well suited to horticulture, it could be pistachios, almonds, walnuts or citrus.” 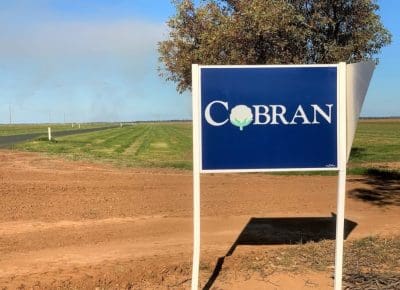 Cobran West is being offered via Expressions of Interest closing on September 15.

The listing of the full Cobran Station in October was the second time the aggregation came to market in three years.

Westchester purchased Cobran in 2012 in the wind-up of Twynam Agriculture.

When the property came to market last year, Westchester Australia CEO Matt Bull said the owners were not in the position to continue investing in Cobran.

“Under our standard investment strategy, we would normally continue to lease a property like this for another 10 years, and/or look to further value-add by developing the land,” Mr Bull said.

“Unfortunately, the investment entity which owns Cobran does not have additional capital available to continue developing this property to a higher-value and more intensive use.”

Based in the United States, Westchester is owned by Nuveen which invests funds on behalf of US Teachers Insurance and Annuity Association of America and College Retirement Equities Fund (TIAA-CREF) and others.

Its Australian holdings are located primarily in NSW and Western Australia, and it also owns country in Victoria and Queensland.

The Cobran West listing comes on the back of several other irrigated cropping properties hitting the market.

Estimated to sell for around $70 million, the 4386ha aggregation has a history of producing irrigated cotton, sorghum and cereals, as well as portions of dryland cropping as well as a macadamias.

The 2402ha north-west NSW property is the last parcel of the mammoth 19,060ha Milton Downs cropping aggregation to be listed.