The University of Sydney campus at Narrabri, including some of more than 40,000 research plots.

A NEW $12 million International Centre of Crop and Digital Farming focusing on research into digital agriculture, heat-tolerant crops and robotic farming will be based at the 2000-hectare University of Sydney Plant Breeding Institute at Narrabri in north-west NSW.

The NSW Government and industry have joined forces with the Sydney Institute of Agriculture to fund the new centre.

“Global food security and the future of agriculture in NSW and Australia rely on the sort of research done by our scientists in Narrabri. This investment from the NSW Government and industry will ensure our 60-year tradition of world-class research will continue through the century,” University of Sydney vice-chancellor and principal Dr Michael Spence said.

The University of Sydney with the Wheat Research Foundation is investing $1.5 million and the Grains Research Development Corporation will contribute $1 million.

“We’ve seen the devastating impacts that this record drought has had on farmers and communities across regional NSW and the research that will be undertaken at this new centre will help boost our resilience to future dry spells,” Mr Barilaro said.

“This research will centre around adapting crops for drought tolerance, providing food security solutions and boosting productivity of farmers.”

The new complex will include genetic and agronomy laboratories alongside digital and robotic workplaces and meeting space to support research and industry engagement.

The investment will also support doubling employment on site to 80 staff and attract post-graduate students and researchers from around the world.

“This investment is a wonderful reaffirmation by the NSW Government of the long-term importance of science and its role in the regeneration of agriculture and regional communities,” Sydney Institute of Agriculture director and professor of Digital Agriculture, Alex McBratney, said.

“The University of Sydney has 60 years of scientific effort at Narrabri. The new International Crop and Digital Agricultural Research Centre will ensure a strong and lasting future for cutting-edge agricultural research and industry outreach.”

University of Sydney dean of science, Professor Iain Young, said the funding was evidence of the great success of the University’s partnership program with industry and commitment to regional Australia and agriculture.

Central research interests at the centre will include wheat, chickpeas, faba beans and other summer crops as well as addressing farming system challenges such as weed management, soil science, emerging crops and field robotics and digital agriculture.

Examples of research at Narrabri to be given support through the centre include: 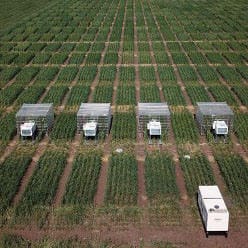 In order to feed a growing population in a warming world, scientists are identifying heat tolerance in wheat. A diverse range of genetic material is being collected from all over the world and 3500 lines have already been evaluated. New superior types of wheat are being produced from the material that is identified to be the best under high temperature. 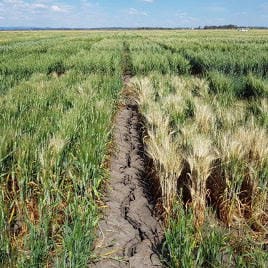 The rate of wheat yield improvement has stagnated in many parts of the world. The University of Sydney and partners have developed a genetic system that facilitates the production of cost-effective hybrid seed. New F1 hybrids are being evaluated across Australia, Africa, Europe, South Asia, and North and South America in a search for improved hybrid vigour. The availability of hybrid wheat cultivars would provide more options for Australian grain-growers.

Crown rot is a chronic and severe disease of cereals in Australia, with estimates of $80m of losses A person standing on a dry grass field annually. Most Australian varieties of wheat are susceptible to this disease, and the development of improved resistance is a major priority for Australian wheat breeding companies. To help achieve this goal, GRDC invested $6m between 2015 and 2020 to improve resistance and tolerance to crown rot through a targeted breeding program.