RESEARCHERS at Duke University in North Carolina, United States, have been studying something that happens too slowly for our eyes to see.
A team in biologist Philip Benfey’s lab wanted to see how plant roots burrow into the soil.
So, they set up a camera on rice seeds sprouting in clear gel, taking a new picture every 15 minutes for several days after germination.
When they played their footage back at 15 frames per second, compressing 100 hours of growth into less than a minute, they saw that rice roots use a trick to gain their first foothold in the soil: their growing tips make corkscrew-like motions, waggling and winding in a helical path.

VIDEO: New time-lapse videos capture something that’s too slow for our eyes to see: the growing tips of rice roots make corkscrew-like motions, waggling and winding in a helical path as they burrow into the soil. (Source: Benfey/Goldman labs. Produced by Veronique Koch)

By using their time-lapse footage, along with a root-like robot to test ideas, the researchers gained new insights into how and why plant root tips twirl as they grow.
The first clue came from something else the team noticed: some roots can’t do the corkscrew dance. The culprit, they found, is a mutation in a gene called HK1 that makes them grow straight down, instead of circling and meandering like other roots do.
The team also noted that the mutant roots grew twice as deep as normal ones.
Which raised a question: “What does the more typical spiralling tip growth do for the plant?” said Isaiah Taylor, a postdoctoral associate in Benfey’s lab at Duke. 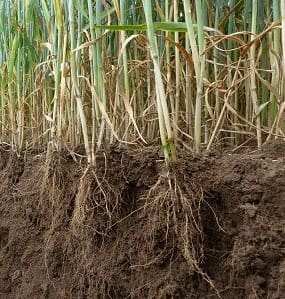 Winding movements in plants were “a phenomenon that fascinated Charles Darwin,” even 150 years ago, Benfey said.
In the case of shoots, there’s an obvious utility: twining and circling makes it easier to get a grip as they climb towards the sunlight. But how and why it happens in roots was more of a mystery.
Sprouting seeds have a challenge, the researchers say. If they’re to survive, the first tiny root that emerges has to anchor the plant and probe downwards to suck up the water and nutrients the plant needs to grow.
Which got them thinking: perhaps in root tips this spiral growth is a search strategy — a way to find the best path forward, Taylor said.
In experiments performed in physics professor Daniel Goldman’s lab at Georgia Tech, observations of normal and mutant rice roots growing over a perforated plastic plate revealed that normal spiralling roots were three times more likely to find a hole and grow through to the other side.

Collaborators at Georgia Tech and the University of California, Santa Barbara, built a soft pliable robot that unfurls from its tip like a root and set it loose in an obstacle course consisting of unevenly spaced pegs.
To create the robot, the team took two inflatable plastic tubes and nested them inside each other. Changing the air pressure pushed the soft inner tube from the inside out, making the robot elongate from the tip. Contracting opposing pairs of artificial “muscles” made the robot’s tip bend side to side as it grew.
Even without sophisticated sensors or controls, the robotic root was still able to make its way past obstacles and find a path through the pegs. But when the side-to-side bending stopped, the robot quickly got stuck against a peg.
Finally, the team grew normal and mutant rice seeds in a dirt mix used for baseball fields, to test them out on obstacles a root would actually encounter in soil. Sure enough, while the mutants had trouble getting a toehold, the normal roots with spiral-growing tips were able to bore through.
A root tip’s corkscrew growth is coordinated by the plant hormone auxin, a growth substance the researchers think may move around the tip of a growing root in a wave-like pattern. Auxin buildup on one side of the root causes those cells to elongate less than those on the other side, and the root tip bends in that direction.
Plants that carry the HK1 mutation can’t dance because of a defect in how auxin is carried from cell to cell, the researchers found. Block this hormone and roots lose their ability to twirl.
The work helps scientists understand how roots grow in hard, compacted soil.