DANISH aquafeed company, BioMar, is ready to start building its $56-million aquafeed plant at Wesley Vale in northwest Tasmania following the granting of a Development Application (DA) from Latrobe Council. 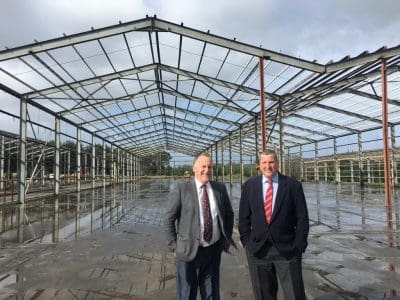 The plant is expected to be operating by the end of next year, and will produce up to 110,000 tonnes per annum of aquafeed, making it the largest dedicated aquafeed facility in Australia.

BioMar Australia technical customer account manager, Alasdair Bradley, said up to 250 contractors would be required during the 14-month construction phase.

The BioMar facility is being developed at 329 Mill Road on the 18.5-hectare site of the former particle board manufacturing mill, and adjacent to the former Wesley Vale Paper Mill.

“The site’s redundant facilities have been dismantled and it is now ready for work to start on the new production building.”

The development is expected to create 55 full-time jobs and an additional 30 logistics and operational jobs across the region.

Mr Bradley said BioMar would be in a position to award a civil works contract to an Australian firm in coming weeks, with ground works to kick off following their commencement.

“We are also currently in the process of hiring more staff to join our current team on the ground in Tasmania.”

The Tasmanian Government has committed $2.3 million to the project.

BioMar is one of the world’s largest salmon and aquaculture feed producers, and has facilities in 11 countries.

It started supplying feed to Tasmania’s Atlantic salmon market in 2003, and currently supplies feed to one-third of the state’s farmed salmon.

BioMar last year announced plans to build the plant as an alternative shipping aquafeed to Tasmania from its factories in Chile and Scotland.

A second aquafeed plant for northern Tasmania is currently being built by Ridley Corporation.

Located at Westbury, it will have a production capacity of 50,000t, and is due to start operating next year.