DESPITE the considerable head-winds caused by record-high feedgrain prices at present, the outcome of the latest 100-day grainfed trading budget calculated by Grain Central’s sister online publication, Beef Central, shows a substantial improvement over the past month.

Based on our standard set of variables (refer details at base of page) which have been in use since this series started in 2011, we’ve calculated a loss of $31 on a flatback feeder steer entering a typical Darling Downs feedlot today, and closing-out for slaughter after 105 days, exiting mid-September.

That’s a considerable improvement on an $88 loss recorded in our previous breakeven calculated a month ago, and a vast gap from a record $155 loss seen in February, which highlighted the difficult trading conditions for lotfeeders over the past 12 months.

For today’s calculation, we’ve allocated a feeder steer buy price (flatback, 450kg) of 265c/kg, down from 280c/kg a month ago and around 300c/kg on the back of March rain.

That 15c/kg shift in the last month represents a saving of $67/head. As we’ll explain in greater detail below, that trumps a $47 rise in cost of ration reported over the same period.

Today’s feeder steer purchase price is the lowest figure we’ve published for this report series since April 2015 (255c/kg), just as the big surge started in store and finished cattle prices across Australia. At its peak in June 2016, flatback feeders fitting our description were worth 360c/kg, peaking in between our reports at 370-380c. That means a feeder purchased today is worth $427 less than it was at the market’s 2016 peak.

While some Downs feedlot rations this week are being quoted as high as $415-$420/tonne, we’ve costed ration for today’s report more conservatively at $410/t – a $30/t lift in the past four or five weeks. That’s the highest ration price recorded in the seven years that this report has been compiled.

Some reports suggest downs lotfeeders have a little more cover at present than they did earlier, as they chased the feedgrain market up from around $340/t only six or seven weeks ago. Some yards apparently now have old season grain cover out to September/October.

Cheaper prices recently for sorghum, on the back of China/US agreements, have seen some yards with appropriate grain processing systems using sorghum more liberally in rations.

White grains have lifted about $50/t in value since our previous report in April, and were being quoted this week around $400/t.

Some have the view that there is still substantial storages held on-farm, but growers are reluctant to sell, until the crop that’s in the ground is up and away. Apparently there’s been a little trading of that stored grain in recent weeks, given that it will be July payment for the new financial year.

Talk continues to circulate about more bulk grain shipments heading to Port of Brisbane from Adelaide or Fremantle.

Ration prices at these levels continue to damage prospects of a positive trade on our 100-day grainfed steer budget, delivering a total feeding cost over 105 days of a record $642 – and a total production cost (combining feeder steer price, freight, induction, feeding and other associated costs) of $1936.

Due to the record-high ration price, cost of gain for our typical southern Queensland feedlot in today’s calculation is 306c/kg (284c/kg in April) – again, an all-time record seen in this report since 2011.

As the graph published here shows, there’s been a shift in the relationship between feeder price and cost of gain, after two years where the feeder price was higher than the cost to feed, which inevitably encouraged some lotfeeders to select lighter cattle, and feed them longer, to maximise the benefit. 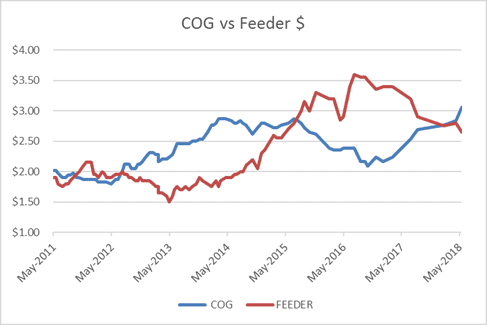 The above set of variables has delivered a breakeven figure in today’s calculation of 549c/kg (down 6c from 555c in our April budget), against a forward contract price from processors for 100-day steers ready for slaughter mid-September of 540c/kg.

That 9c difference represents a $31 loss on the trade, based on our standard set of variables – a great improvement on an $88 loss recorded this time last month.

Pat of the improvement is due to the rise in forward contract price on 100-day ox over the past month (up 10c/kg carcase weight), largely in recognition of the softening value of the A$ (currently sitting around US75c), and the widespread expectation that slaughter cattle will be horribly scarce come August/September this year.

As Beef Central often reminds readers, profit/loss results on cattle will vary somewhat, depending on performance of cattle and ration. While our chosen ADG of 2kg/day is representative of ‘middle of the road’ performance in Queensland feedyards, for cattle performing 10pc better (2.2kg/day ADG), the feeding efficiency goes from 7.5: 1 to 6.82:1, meaning the breakeven figure drops to 532c.

In that case, those better-performing cattle would deliver a $29 profit, based on today’s budget.

The impact of that change in ADG becomes even more acute at times of extremely high ration prices, like today.

Such results would suggest Darling Downs feedyards will remain close to capacity for the foreseeable future, despite the high grain price pressure. 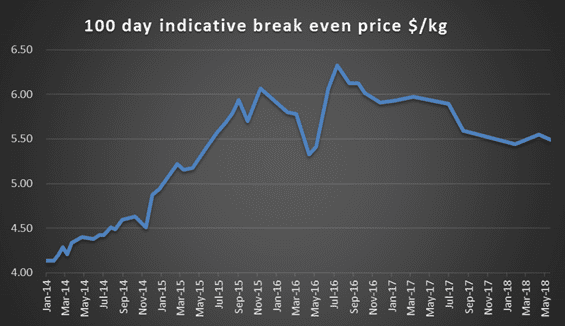 Looking back at 100-day grainfed ox being delivered to processors for slaughter this week, if those cattle were bought on forward contract back in February, they were worth around 500c/kg, compared with spot-market price today between 520c/kg and 540c/kg. That means cattle forward-purchased by processors back in February, for May delivery, are saving the processor 20-30c/kg, or $70-$106.

Beef Central’s regular 100-day grainfed breakeven scenario is based on a standard set of representative production variables, ex Darling Downs. It is built on a feeder steer of 450kg liveweight, fed 105 days; 356kg dressed weight at slaughter; ADG of 2kg; consumption 15kg/day and a NFE ratio of 7.5:1 (as fed); $25 freight; typical implant program. Bank interest is included. It is important to note that variations exist across production models (feed conversion, daily gain, mortality, morbidity, carcase specification); from feedlot to feedlot; and between mobs of cattle. Equally, there can be considerable variation at any given time in ration costs charged by different custom-feed service feedlots. Click here to view an earlier article on this topic. For a more specific performance assessment on a given mob of cattle, consult with your preferred custom feeder.