SALES of new-crop Australian wheat are ticking over ahead of a shipment program which looks set to start in November.

China, Indonesia, Malaysia, The Philippines and Vietnam are all believed to have booked new-crop cargoes of Australian wheat for shipment up to February. Low basis, which reflects the premium for Australian wheat over United States wheat futures, is a marketing plus, while China’s intention to increase inspection, testing and document verification of Australian wheat and barley imports is the market’s largest concern. The news from the General Administration of Customs of China (GACC) came via a 1 September notification on its website.

Amid tensions between the Australian and Chinese governments, exporters are hoping that wheat does not join barley in being excluded from volume sales to China.

For what it’s worth, Australia’s track record appears to be supportive.

“Despite the notice identifying wheat, the Department of Agriculture, Water and the Environment has not received any formal non-compliance notifications for Australian wheat from China in over two years,” a spokesperson for the Australian Government department said.

“The department is aware of this notice and continues to hold regular teleconferences with major grain exporters and industry to keep them abreast of the latest market-access issues.”

Sources have said up to 1.5 million tonnes (Mt) of new-crop wheat may have been sold at basis levels of around AU$12-$15 per tonne over Chicago December wheat, which is competitive with Black Sea wheat now being shipped to Asia.

In its latest monthly supply-and-demand report for wheat issued 2 September, Lachstock Consulting said the market was saying up to 1Mt of wheat may have already been booked to Vietnam.

Lachstock said Vietnam usually imported 3-4Mt of wheat each year, peaking out at 5.3Mt in 2016-17.
“Australia will often account for 1-2Mt of this, with Russia being the major recent competitor, so for Australia to have done 1Mt already is a big lick of the market share,” the Lachstock report said.
“With Australia continuing to price well against Russia, there is the opportunity to see Australian shipments to Vietnam jump north of 2Mt in the upcoming 20-21 season.”

On volume, China is thought to have booked the next biggest new-crop amount behind Vietnam as part of its 2020-21 wheat imports forecast at 7Mt by USDA in its September World Agricultural Supply and Demand Estimates report forecast, up 1Mt from its August estimate.
Canada, the EU and US as well as Australia are all expected to be major suppliers to China in the year to June.
In a report released Tuesday, Thomas Elder Markets manager commodity market insights Andrew Whitelaw said China’s announcement through GACC should be worrying for exporters who already had sales on the books.
“If an inspector wants to find an issue with a cargo, it is effortless to do so.”
China has since 2008 bought on average 6 per cent of Australia’s wheat exports, with 2018 the lowest year at 1pc, and 2019 the highest at 15pc.

“That being said, during the same period, we were responsible for an average of 39pc of Chinese imports.” 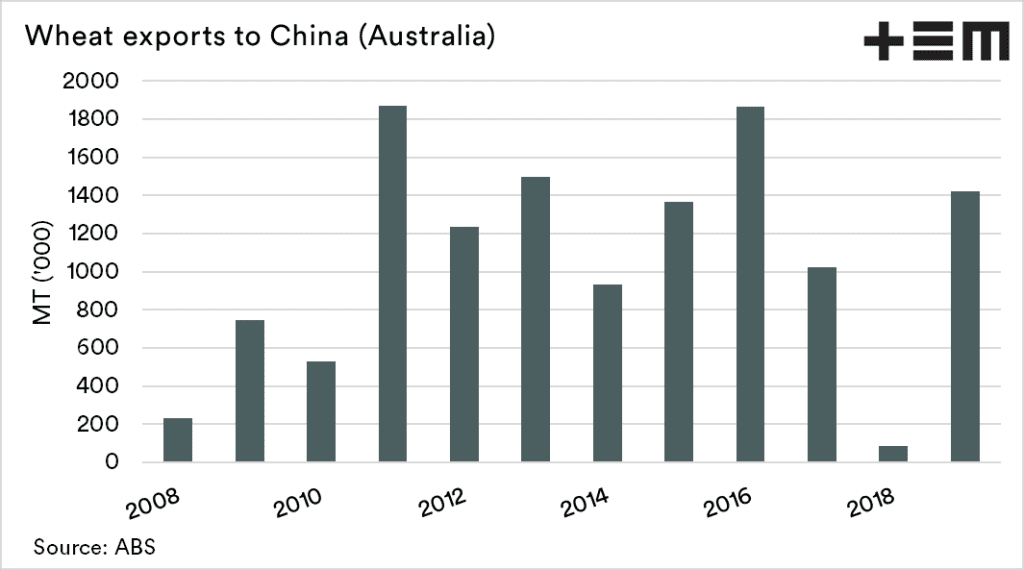 Barley has consistently accounted for the bulk of Australian grain exports to China, with some years also seeing significant volumes of canola, sorghum and pulses as well as wheat shipped.

“The extra risk may reduce our capacity to participate in this market, however the risk is less to Australian producers than locking out the barley market.”
China’s introduction in May of a hefty tariff on Australian barley had a big price impact on barley as Australia’s second-biggest grain export behind wheat.
Earlier this month, China suspended barley imports from CBH Grain, the trading division of Western Australian co-operative CBH Group, on the grounds of a breach of weed seed limits.
CBH has this week reiterated its confidence in grain it exports from Western Australia meeting all Australian phytosanitary requirements.

If the Australian dollar strengthens considerably, or if spring goes against the forecast and turns hot and dry, basis is likely to jump.

If basis stays put, more export sales are likely as harvest, already under way in parts of Queensland, ramps up.

Market Check head of strategy Nick Crundall said it was  reasonable to say Australia had booked 1.5Mt of new-crop wheat business, with China and Vietnam being the major destinations so far.
“The Philippines has been buying, but there are some rumours around difficulty of obtaining import permits, which has dampened its forward interest a touch.
Mr Crundall said Indonesia was among importers holding off buying Australian wheat for the time being, with the view that the crop was likely to be big, and they would be able to buy at lower prices once the grower started to engage in selling over the next couple of weeks.

“Basis CBOT-20 is about AU$12-15/t over, which is $10 higher than the season low, with the rally in our relative pricing coming from both a rise in global FOB values, and the dry spell we’ve seen domestically over the past 4-6 weeks.”

“Pending rainfall forecast for the weekend, this is threatening to take the shine off what looks like a great winter crop.’

“When we look at basis, it’s important to look at Aussie wheat basis both versus the US futures but also the Black Sea/MATIF market, as they are our biggest competition when it comes to exporting.

“When we look at our basis Black Sea for example, we are as weak as we’ve been for some time, highlighting both the cheap relative pricing of our wheat but also the recent surge in global export markets, which is helping support our prices.”

Mr Crundall said where basis will go between here and January is hard to pick.

“A lot comes down to the quality of our crop, but also what market we’re looking at.

“Basis CBOT can definitely appreciate, given the CBOT market is so inflated versus the rest of the world prices, so a basis rally may come from a fall in CBOT’s relative pricing.

“Outside of some short-term risk, our relative pricing is very supported around current levels”

Mr Crundall said a rally in Australian basis may come from a lack of adequate grower selling, especially if we see global and futures markets fall, and growers prove unwilling to sell at lower numbers.

Quality issues caused by wet weather or an excessively dry finish, or an export program hefty enough in the front end to bring a lot of demand to the market, could push prices higher.

“Looking further out, basis looks very attractive, and a good risk/reward proposition to hold into the post-harvest market as our relative downside is limited considering how cheap we are versus our export competitors.”