JULY shipments of Australian chickpeas have continued at lacklustre levels, with Pakistan the only bulk market, according to the latest Australian Bureau of Statistics (ABS) export data. 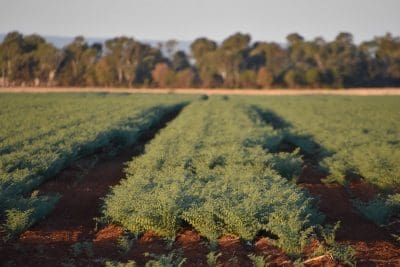 A chickpea crop in the Springsure district of Central Queensland, where harvest has started for early sown crops. Photo: Trina Patterson

The massive drop shows the continued absence of Australia’s biggest chickpea market, India, where a large domestic crop has shut the gate on virtually all pulse imports.

Trade sources have said shipments in August might be lucky to make July levels, with Pakistan now turning its attention to east African chickpeas, and Bangladesh keen to see the quality of new-crop Australian chickpeas before committing to purchases.

“Going forward, we may be lucky to continue these volumes, as Pakistan has stepped out at the moment,” Robinson Grain trader, Adam Robinson, said.

“They are getting some Ethiopian and Tanzanian peas, and cheaper offers on old-crop out of Australia.”

Traders said old-crop peas were trading at around $750 per tonne delivered Darling Downs, and new-crop was trading at $800-$810/t.

“If you export chickpeas to Pakistan and India, they mostly become chana dhal, but in Bangladesh, the pea is eaten whole, so it’s a very quality-conscious market, and they like a nice light tan product.”

This means Bangladesh has limited interest in old-crop chickpeas, some of which show signs of weather damage suffered during the 2017 harvest.

“The big risk we are now facing is if India starts to export.”

“That October-to-December demand we normally see from India we aren’t going to get this year, and Bangladesh is more interested in January-March shipment.”

In its periodic Australian crop report released yesterday, ABARES forecast a national chickpea crop of 351,000t, down from 1.15 million tonnes produced last year, with the tumble being due to drought in northern New South Wales and much of southern Queensland.

The bright spot for Australian chickpea production is Central Queensland, where harvest is just getting under way.