The Australian Export Grains Innovation Centre (AEGIC) team has won a national award for its reports which proves the world is watching what Australia thinks about its Black Sea competitors in grains and oilseeds markets. 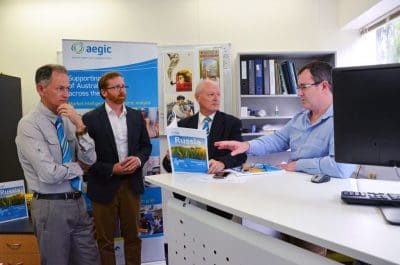 The authors of the AEGIC reports on the grain industries of Russia and Ukraine,  received the AARES 2017 Quality of Research Communication Award last night at the AARES annual conference dinner in Brisbane.

The reports warned that increasing wheat exports from the Black Sea region have the potential to undermine Australia’s competitiveness in key Asian markets.

AEGIC’s Keir Tunbridge said the reports have both been well-received in Australia and overseas.

“Between them, they have been downloaded more than 5000 times.”

AEGIC said it has received very positive unsolicited feedback from a range of stakeholders, including a recent comment from an Australian agricultural expert that it should be compulsory reading for all wheat farmers in Australia.

“The most important message is for Australia to take the challenge seriously and react in a collaborative, strategic manner.”

“It has been fantastic to have had such a strong response across Australia to these two reports.  It remains crucial that the Australian industry takes seriously the threats outlined in the reports. Australia needs to ensure that its response is well-considered, coordinated and strategic,” Prof Kingwell said.

“The Committee felt that the clarity of writing, the quality of presentation, including use of images, and novel ways for users to obtain further information and to interact make this important work and its implications available to a broad audience.”