CHICKPEA yields in Australia’s key producing areas of Queensland and northern New South Wales are likely to have taken a hit from successive frosts in recent days, with crops on the Darling Downs of southern Queensland looking to be most affected. 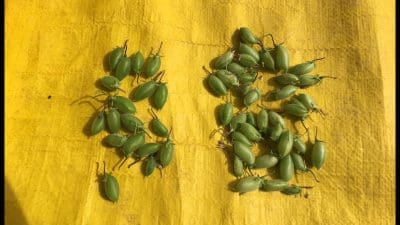 Frost has taken around 65 per cent of the pods from a chickpea crop at Jimbour on the Darling Downs. Image: Jordan McDonald

Elders Dalby agronomist, Jordan McDonald, said frost has claimed up to 70 per cent of pods and flowers in some crops, but rain in the next two to three weeks would allow them to regain lost yield potential.

“There’s been a fair bit of damage in chickpeas, but it’s not the end of the world for crops with moisture under them, and that’s mostly the later planted ones,” Mr McDonald said.

“It’s not good for the crops that don’t have their secondary roots down; they are the big worry, but even for them, rain in the next few weeks would make a massive difference.”

Since Saturday, overnight temperatures on the Darling Downs have gotten as low as -6 degrees Celsius in some places, and -2 to -4 in many.

“I’ve seen some dieback in the leaf, and that only happens once the temperatures get down to -3.”

Without rain, Downs chickpea crops could be looking at an average yield of 1.3 tonnes per hectare, around half of what was harvested from last year’s bumper crop.

Last week saw daytime maximums in southern Queensland and northern NSW get to 30 degrees, around 10 degrees above the average for this time of year, with drying westerly winds further fuelling evaporation of soil moisture.

MCA agronomist, Paul Gardoll, Goondiwindi, said chickpea and cereal crops on the NSW-Queensland border would have lost some yield potential due to frosts in recent days.

“There will be some frost damage in wheat. It’s a bit too early to see what has happened after the frosts on Saturday, Sunday and Monday, but we’re started to get a bit of tipping that shows it’s had an impact.”

“Our moisture is starting to run out, and with only 50 millimetres of in-crop rain for a lot of crops, it doesn’t matter how much sub-soil you’ve got, you’re crop is going to struggle.”

Mr Gardoll said some crops were “hanging in pretty well”, with earlier-planted wheat, barley and chickpeas faring the best.

“Yields will be down on average in most places, and west of Goondiwindi, they’re putting stock in on blocks of crop that won’t make it.”

“We’re going to see that creep east if the warm and dry weather continues.”

“We’re coughing on dust now; this time last year, we were sloshing around in chickpeas crops checking for disease.”

Mr Gardoll uses SoilWaterApp to assist clients with crop management decisions, and said with 150mm of soil water available to crops around the district, and 12 kilograms of grain penciled in for every millimetre of moisture, yields were looking like 1.8t/ha maximum.

“The unknown is how long subsoil moisture is going to last. We can’t aim for yields of 1.5-2t/ha; it will be more like the long-term district average of 1.2-1.7t/ha, when last year, growers in marginal areas were getting 3-3.5t/ha.”

Barnes Agricultural Consulting agronomist, Matthew Barnes, Emerald, said recent frosts were likely to have wiped 10 to 15pc of yields from crops in pockets of Central Queensland.

“There are certainly some areas that would have lost grain, especially on wheat crops that were not that much chop, and chickpeas that have no moisture under them.”

Mr Barnes said some crops in the Capella, Comet, Dysart and Gindie district were among those affected in the wider region.

“Some chickpea crops have lost their last four or five flowers and lost pods.”

Harvest in Central Queensland has started with a few very early crops, and is expected to be in full swing by the middle of next month.

Walgett grower, David Ricardo, said lack of moisture since before planting time has limited 2017 plantings, and the crop in the ground was struggling.

“Chickpeas are flowering now, and the combination of cool nights and a hot few days of 30 degrees has the crop pushing earlier than it should because of moisture stress.”

Mr Ricardo said the frost was likely to have caused some yield loss to cereals and chickpeas, but the extent of damage could not yet be seen.

“There’s wheat that’s pushing its head up and is about to start flowering; everything’s moisture stressed and we need rain.”

Crops in central and southern NSW, where in-crop rain has been greater than in cropping regions to the north, have not experienced the recent minimum temperatures low enough to cause widespread yield damage.