Strong chance of El Niño developing, but likely to be short-lived: BOM

THE Bureau of Meteorology’s El Niño Southern Oscillation (ENSO) Outlook remains at El Niño Alert which means the chance of El Niño developing in 2019 is approximately 70 per cent. 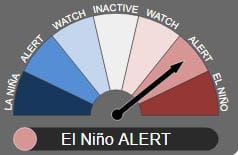 But climate models indicate that if El Niño does develop it is likely to be short-lived.

A cooling of water at depth can lead to a cooling of the ocean surface, which may reduce the length of an event if one develops.

Most climate models indicate surface warmth in the Pacific Ocean will remain at El Niño-like levels at least through May.

The longer the ocean surface warmth remains, the more likely it is that the atmosphere will respond, and El Niño will develop.

If El Niño does develop in May, it’s likely to be short lived, with most models indicating the ocean will likely cool through winter and spring. Four of the eight surveyed models return to neutral by September, and the other four indicate weak El Niño levels.

El Niño typically brings drier than average conditions for eastern Australia during winter–spring, and warmer days across the southern two-thirds of the country.

Climate outlooks indicate the IOD is likely to remain neutral for the remainder of autumn.

However, by September half of the models predict a positive IOD will form, with the rest indicating neutral conditions will persist.

A positive IOD typically means drier than average conditions for southern and central Australia during winter-spring.