IT’S EARLY days in a small harvest, but while some test weights are achieving number one grade, plenty of growers are finding their sorghum is pulling up unusually light. 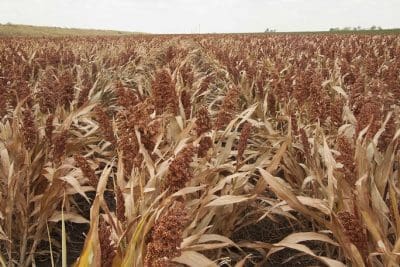 Darling Downs sorghum crop February 14,  2017; most are expected to yield below average this year.

“We’ll have a fair idea how it’s going in a week or so.  The sorghum harvest in Queensland this year looks like it will run pretty quickly from start to finish.”

An optimist might say this could turn out to just be early-harvest wobbles, but low plantings gave an early sign of a likely small 2017 harvest hampered by mediocre quality.

Reduced sorghum planting area had been evident in the paddock, however a report released yesterday from the Australian Bureau of Agricultural and Resource Economics and Sciences (ABARES) showed the extent of the cut to the sorghum area — amid doubling of cotton area.

The table below shows Queensland and NSW sorghum area estimates in ABARES’ February 2017 Australian Crop Report, compared with the December report and the 5-year average:

None of eastern Australia’s four summer-crop growing regions were planted into a full soil-moisture profile, and few crops have had sufficient rainfall, since planting, to make up for it.

No-one, anywhere, has attached any superlatives to the sorghum crop now starting harvest, which has been described as patchy at best.

Grain Central last week reported the Liverpool Plains’ sorghum crop got off to the best start of any region, but has been knocked around by intense heat and lack of rain since flowering.

“Harvest will be earlier this year.  We’d usually expect to start harvesting sorghum around mid-March, but this year it’ll be 2 to 3 weeks earlier.”

A long-time industry specialist last week, in the heat, walked paddocks through crops in the Liverpool Plains region.  The coolest day last week had a maximum 35 degrees Celcius.  While there’s not yet a lot of quantitative data from this crop, lack of moisture had made life incredibly tough for sorghum plants.

Exceptional Darling Downs farmers in best-of-the-best reliable country — from Brookstead towards Dalby — have harvested near-normal test weight sorghum, around 74 kilograms per hectolitre (kg/Hl), but their peers have struggled to achieve the number 1 grade test weight minimum of 71 kg/Hl.

The better performing crops were possibly lucky to catch the rare summer storm this year.  They may have had a slightly stronger paddock history or a longer fallow to give the better result among fickle performances.

As the possibility of a poor harvest had turned to a reality at commencement of harvest, and as January sellers off-the-header offered above the level of last trade, sorghum buyers paid higher prices in Queensland and the differential grew between the grades.

The first week of February saw the price up notionally $5/t.

It was bid another $10 higher in the second week.

By the middle of the third week of February this differential had extended beyond A$40/t silo cash bid.

Good news for other grains

Good news for other grains, particularly wheat, which will replace sorghum in animal feed rations.

A mill-operator told Grain Central that sorghum consumption will reduce in animal rations in favour of wheat over time, because same-priced wheat and sorghum won’t survive in rations more than a couple of months.

Meantime, those who have bought sorghum will expect suppliers to deliver.

So in the medium term — say, from mid-year on — the stockfeed market is likely to factor sorghum as a smaller ration percentage, replacing it with wheat.

China’s baijiu alcohol market is expected to scale down fresh purchases of Australian sorghum this year.

Pre-existing containerised commitments to that market may not be supplemented till the meagre crop is in the bin.