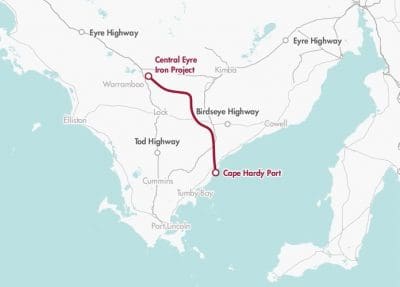 Announced by Deputy Prime Minister Michael McCormack in December, it will support the development of the new multi-commodity deep-water port capable of handling cape-size vessels, the largest class of dry cargo ships in the world.

Delivered in the Federal Government’s Mid-Year Economic and Fiscal Outlook 2019-20, it has allocated $5M for the current financial year, and $20M in 2020-21.

“Together with our Stage I foundation partner, Eyre Peninsula Co-operative Bulk Handling, we look forward to progressively communicating the detailed business case and new strategic partners.

“Financial close and construction is aggressively being targeted in 2020 to accelerate this long-awaited infrastructure for the Eyre Peninsula.”

Federal Member for Grey Rowan Ramsey said proponents of the renewable-hydrogen, graphite, grain, hay and iron industries had all been pressing for support to develop a multi-commodity port like Cape Hardy.

He said the $25M grant should help the project secure the funding it needed from other interested parties to see it built.

“If we are to realise our true potential, we need to ensure we have the right infrastructure in place for other projects,” Mr Ramsey said.

The proposed development includes the building of a 148-kilometre heavy-haul standard- gauge rail connection between the proposed Central Eyre iron-ore mine and Cape Hardy, which could potentially be connected to the National Rail Network near Port Augusta or Whyalla.

Cape Hardy would be an open-access port available to grain shippers and other miners as well as Iron Road’s Central Eyre mine, which is expected to produce up to 24M tonnes of iron ore per annum.

EP’s newest grain terminal, the T-Ports facility at Lucky Bay, is expected to load its first cargo as soon as next month, and a further terminal being planned by FREE Eyre’s Peninsula Ports is on the drawing board for Port Spencer.