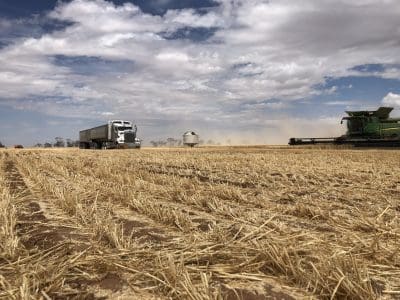 PRICES for wheat have jumped $5-$15 per tonne this week as consumers cover nearby positions amid limited supply.

The southern Queensland and northern New South Wales market has rallied the most as the small amount of grain harvested locally runs low, and traders look to the free-on-truck (FOT) Brisbane market for Western Australian wheat, and to NSW railheads for South Australian wheat.

Some heat-related harvest bans followed by cool and showery weather have delayed the start in earnest of the much-anticipated Wimmera wheat harvest, where growers appear happy to continue the trend of holding wheat and barley after selling their hay and canola for cash.

From Western Australia to southern Queensland, yields in most crops harvested to date have been below average yields.

This has fuelled the bullish market, as have ABARES’ latest forecasts for the winter cereals now being harvested.

On the consumption side, latest cattle-on-feed numbers show Australia’s largest feeding states recorded gains over the July-September quarter, with Queensland up 1.1 per cent to 660,269 head, and NSW up 1.6pc to 321,951 head.

It means feedlots look set to continue being major end users of wheat and barley, and are likely to have little to no sorghum to factor into their rations next year.

Sorghum normally supplies a sizeable chunk of the regions’ feedgrain and ethanol demand from March to September, but hopes for a widespread plant this summer are looking slim.

“It would take an extraordinary rain event to get a good sorghum crop in northern NSW and southern Queensland,” Agracom Quirindi-based trader Brett Donoghue said.

The sorghum market is nominally at $430/t in the Newcastle track market for new-crop, but Mr Donoghoe said the chronically short supply outlook means it is not being offered.

The winter-crop harvest in all but the inner slopes of southern NSW is largely over, with excellent quality and protein some consolation for low yields.

On the Liverpool Plains in the state’s north, many loads of wheat have made Prime Hard 1 or 2 segregations, but appear likely to supply feedmills because containerised grain would be overpriced for export, and flour millers are looking for cheaper prices in Victoria and southern NSW.

“The Liverpool Plains market will execute better by road and rail than by vessel out of Newcastle, and those north-south spreads are doing a considerable amount of work on barley and wheat.”

While boat barley out of WA has bought itself some demand in recent weeks, coastal users including poultry mills are looking for wheat.

“The feedlots have pinned their ears back on barley, but there could be a real squeeze out of Brisbane on wheat.”

“Buying FOT from Werris Creek is an option, and everyone’s waiting for growers in the Wimmera to sell off the header.

“There’s a fair bit of pent-up demand in Victoria, and even in southern NSW.

“The northern markets have rallied $10-$15/t this week; it feels like there’s not enough wheat in the pipeline.”

In Balaklava in South Australia, Australian Growers Direct accumulation manager Tyrone Stowers said good quality, high protein and low yields have throttled the supply of ASW-type wheat, and prices for all grades have lifted about $5/t this week.

“Some growers in the Mid-North who would be hoping for 3-4 tonnes per hectare are lucky to get 2t/ha, but the quality has been good.”

Some Hard 1 and 2 SA wheat is working into the feed market because ASW is not available, but once harvest starts in south-east SA and in the Wimmera, lower proteins should work into the feedmills and allow some high-protein wheat to be exported.

This is down about $10-$15/t from prices at the start of harvest, but has held firm in the past week or two.

In its latest harvest report, WA’s CBH Group said slow grower selling and traders looking to cover early shipments had lifted the wheat market $7-$10/t for APW1 in the week to Friday to $337-$340/t free in store (FIS) Kwinana.

Hay prices are rallying on the back of graziers extending their feed coverage into winter as they commit to hold the sheep and cattle numbers they now have.

Crookwell-based iGrain senior account manager Machallie McCormack said the market for canola hay at around $270-$280/t on-farm has lifted $20-$30/t since peak offerings in September and October, and compares with $300/t for cereal hay.

“People are covering their feed commitments out as far as August, and canola hay is going into that market.”

Mr Stowers said some frosted lentil crops in SA have been cut for hay, and are supplementing supplies to the fodder market from vetch hay.

He said lentil and cereal hay from SA was continuing to make its way into northern NSW.

ASX wheat and barley futures gained more than 2 per cent this week.

Trade volume was 70 lots in the January contract. Open interest fell to 2608 lots from 2640 lots at the beginning of the week.

Current crop cottonseed values edged higher because the lack of stock limited willingness of sellers to hurry to market.  Five months remain before 2020 supply will come on stream.