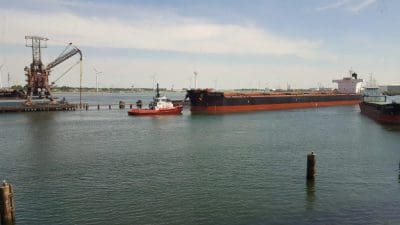 A CBH Group cargo of WA canola arrives in Rotterdam in May 2017. Photo: CBH Group

AUSTRALIA shipped 95,391 tonnes of canola to export customers in November, up 160 per cent from the 36,687t shipped in October, according to the latest data from the Australian Bureau of Statistics (ABS).

The jump comes at its normal time in the Australian shipping calendar, and reflects new-crop canola seed becoming available to supply crushers in Europe until May, when their own crop becomes available.

As with the 2018/19 Australian canola year, all bulk canola exports are likely to come out of South Australia and Western Australia, as well as supplementing supplies to New South Wales, where drought has again had a massive impact on production.

In November, the Australian Oilseeds Federation (AOF) revised its estimate for the crop just harvested to 1.9 million tonnes (Mt) from 2.4Mt seen in July.

AOF executive officer Nick Goddard said the return of China to the Australian canola market was a new demand component, and would likely support prices nationally.

“The east-coast crop at 1.1Mt is up 25pc on last year, softening some of the demand pressure from east-coast crushers though, as with last year, seed will need to be brought across from SA, and potentially WA.