AN agreement reached yesterday between Victorian freight rail operator Pacific National (PN) and the Rail, Tram and Bus Union (RTBU) will put an eight-week stop to industrial action which has been disrupting movements of grain to Victorian ports since March. 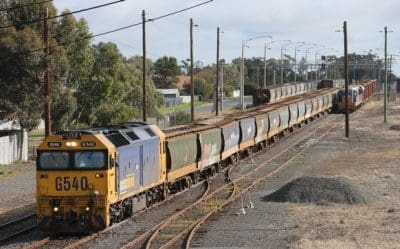 The agreement comes into effect tomorrow when trains hauling Victorian grain to port are scheduled to recommence operations, and ease pressure on road transport which has been called upon to shift tonnage to port to fill the rail shortfall.

The agreement followed a meeting yesterday in front of the Fair Work Commission (FWC) in relation to PN’s Enterprise Agreement (EA) negotiations with Victorian Bulk employees as represented by the RTBU.

It requires both parties to hold weekly discussions which, with the assistance of the FWC, are aimed at resolving all matters in dispute.

“We will work closely with our customers over coming days to reschedule the freight services that did not run this week,” a PN spokesperson said.

“We are hopeful that we will be able to reach an agreement over the course of the eight-week period and look forward to getting back to the important work of transporting Victoria’s fresh produce and grain to our cities and ports.”

All protected industrial action will cease over the period, with the exception of bans relating to shunting at Appleton Dock in Melbourne, and training duties for labour-hire employees.