THE Australian Rail Track Corporation (ARTC) is eyeing a start date of 2020 for the tunnel through the Great Dividing Range which will be a crucial piece of infrastructure for the Inland Rail project. 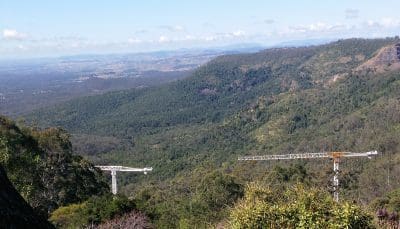 The area north of the Harlaxton quarry (far right) will be the site of the eastern portal for the Toowoomba tunnel, a crucial part of the Inland Rail project. The cranes are being used in construction of the Toowoomba Second Range Crossing.

Speaking at a presentation in Toowoomba yesterday, ARTC manager of the Gowrie to Helidon and Helidon to Calvert projects, Max Nichols, said the company would be preparing environmental impact statements (EIS) over the next 18 months.

In the lead-up to EIS terms of reference being drawn, ARTC is now inviting input in relation to a range of areas including indigenous significance, noise, flora and fauna, dust, and social impacts.

“These are our first cabs off the rank,” Mr Nichols said.

Approval from the Queensland Co-ordinator General and finally the Federal Government in light of the EISs will be required before the projects can proceed.

The Inland Rail corridor has been divided into 13 projects which will link Melbourne and Brisbane, and has promised to create efficiencies and increase capacity for Australian bulk and containerised grain, pulse and oilseed exports.

Mr Nichols said plans for Inland Rail did not include passenger services.

“Its primary purpose is for double-stacked container freight; that might be a quarter to a third, and the rest would be (bulk) agricultural and coal.

“We are building for freight. We have allowed a corridor space beside it that you could build a passenger line on.”

The future of the existing West Moreton narrow-gauge line, which opened in 1867, is uncertain, as its major users like Aurizon and GrainCorp will become foundation customers of Inland Rail.

According to the Inland Rail Business Case, regional agricultural freight forecast to be carried by the entire line when it opens in 2024-25 is forecast at 6.74Mt; this does not include intermodal or intercapital freight.

South-east Queensland coal for export through Brisbane is forecast to total 12.9Mt.

Public comments about the Gowrie to Helidon and Helidon to Calvert projects are due into the Queensland Coordinator General by 5 June, 2017.

The Gowrie to Helidon project will include frontage to InterLinkSQ intermodal hub near Gowrie.

Maps and further information about the Gowrie to Helidon and Helidon to Calvert projects are available online.