THAILAND is forecast to buy 600,000 tonnes of Australian barley this year in a market which has the potential to reach 1 million tonnes (Mt), according to CBH Group trading manager Drew Robertson. 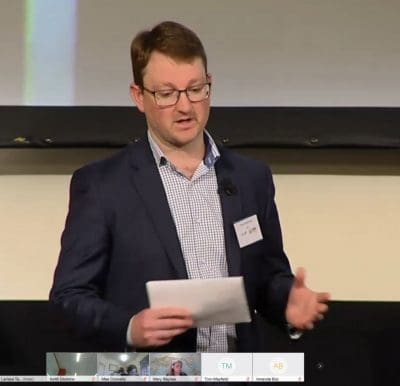 “For every cargo of feed wheat they buy, they have to buy three cargoes of domestic corn.

“That policy is not on barley, so they can buy and consume barley as a result of that without having to make the extra purchases of corn.

“Certainly if barley is priced at about a $15-$20/tonne discount to feed wheat on a landed Thailand basis, then barley has probably displaced feed wheat into those rations.”

In the Australian barley-marketing year to date, Mr Robertson said Thailand had purchased 430,000t, and could end up taking around 600,000t before the new marketing year started.

“Thailand could be up to 1 million tonnes (Mt) next year.”

While Thailand’s domestic corn market gets considerable support from its government, the country has also been a volume importer of corn.

“It’s a question in Thailand of how competitive barley is with feed wheat.”

Australian Bureau of Statistics export data indicates Australia has shipped 479,011t of feed barley to Thailand from November to May.

GIWA hosts annual barley forums, and yesterday’s event looked at the impact of China’s barley tariff on Australia’s barley market, and the state of play for alternative markets.

All agreed nothing would replace China in volume, but the competitive pricing of Australian feed barley, the relatively small premium for malting, and markets including Brazil, India, Indonesia and Vietnam were developing, or had potential to take significant tonnage from next year.

Ms Raynes said India had significant potential as a malting market, and Vietnam as Asia’s third-biggest beer market already imported 60 per cent of its barley from Australia, with growth in the feed sector seen as having the potential to boost demand. Ms Raynes said Vietnam’s demand for barley had increased markedly in the past decade, and could grow further as its feed sector industrialised.

“We can continue to strengthen our existing relationships, deliver barley of desirable qualities, and advocate for barley inclusion in feed rations.”

The agreement allows Australia to export 500,000t of feedgrain to Indonesia for the marketing year which started 5 July, with 5pc per annum increases from next year.

Brazil’s growing appetite for beer meant opportunities in this malting market supplied primarily by Argentina were being investigated.

“We’re working with industry to come up with other market options for our grain.”

“Typically South America is quite reliable in barley production.

“It is an opportunity on malting barley.”

While Australia is on track to produce around 10Mt of barley this year, its typical crop size is 9Mt, with domestic consumption at around 3Mt and split roughly 50/50 between malting and feed, as are exports totalling 6Mt.

China has been Australia’s biggest export by far in recent years.

Its imposition in May of a barley tariff has throttled imports of Australian barley down to the occasional cargo of malting which appears to be used to produce malt for reexport, and is therefore tariff exempt.

However, a massive Australian barley shipment program to China ahead of the half-expected tariff means has taken an estimated 57pc of Australia’s 2019-20 total barley exports, with Thailand in second position on 21pc.

Of Australian malting barley exports for 2019-20 so far, China has bought 83pc, with 7pc combined for Japan and South Korea, and 10pc to South East Asia.

Saudi Arabia is the world’s biggest barley importer, and buys 7-7.5Mt per annum of feed.

To cover its drought deficit, eastern Australia has bought a total of around 1.3Mt of barley from WA and South Australia in 2019-20, which has greatly reduced the export surplus from both states.

However, a return to more normal conditions in the east will see WA and SA looking to export more feed in 2020-21, and Saudi as a long-term Australian customer may well buy considerable tonnage of Australian barley next year.

Mr Craig is a member of the Industry Working Group which was formed by organisations representing Australian barley growers and marketers to work with the Australian Government and provide an industry voice in relation to China’s investigation into Australian barley pricing.

He said the group had been meeting every fortnight for the past 18 months, and was working with AEGIC to develop alternative markets.

Mr Craig said IWG had weighed up the options for countering China’s claims tied to historic pricing of Australian barley, and an appeal to the World Trade Organization appeared the most likely.

“It’s probably wise to move to the WTO.

“It’s a long process; it could take up to three years.”

Preparation of a submission for a WTO appeal is expected to take up to 12 months, and would be led by the Australian Government.

Mr Craig said responses were not “mutually exclusive”, but IWG had to make a decision about which path or paths to pursue based on the likelihood of success.

Options, with summarised IWG responses in italics are:

Industry decided not to pursue due to length of time and possible costs;

Industry is in the process of submitting a response under this appeal process.

ChAFTA agreement refers to WTO – current view is to move to a WTO process;