THE northern-most section of the Melbourne to Brisbane Inland Rail corridor will cross valuable Darling Downs agricultural land on its route announced in Toowoomba today by Federal Minister for Infrastructure and Transport, Darren Chester. 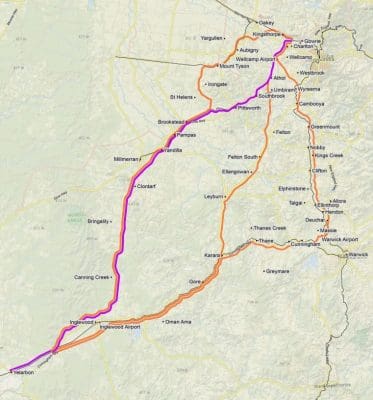 Three possible alignments for the Yelarbon-Gowrie Inland Rail link are shown in orange, with the chosen route shown in pink.

The southern Queensland route across the floodplain was chosen from four alignment options, and will see Inland Rail pass through the townships of Pittsworth and Brookstead as it links Yelarbon, east of Goondiwindi on the Queensland-NSW border, and Gowrie, on the northwestern outskirts of Toowoomba.

The alignment will pass through the Charlton-Wellcamp industrial precinct, which includes the Wellcamp Airport.

“The government has chosen this route because, as much as possible, it uses existing rail corridors, it goes past Wellcamp Airport, which didn’t exist in 2010 when the original route was considered, and it is significantly more economically viable option than the alternative routes,” Mr Chester said.

“I understand that people have concerns about the impacts of the rail line on the floodplain, and I am confident that by using the best engineering minds in Australia we will ensure that the effects are minimised.”

Mr Chester said the decision was based on rigorous technical analysis and consultation with community and industry representatives.

“All options present challenges but it is my view, based on the available information, that the corridor via Wellcamp and Charlton is the right decision.

The final design will be subject to an extensive Queensland Government planning and approvals process, which will work through questions about technical and environmental aspects, and involve further community consultation.

Two of the considered alignments linked Karara and Wellcamp Airport, one via Warwick and the other via Leyburn, while the Base Case route would have linked Brookstead and Kingsthorpe via Mt Tyson, but passed well to the north of Wellcamp Airport.

AgForce grains president, Wayne Newton, said today the chosen route would have massive impacts on local landholders and some of the best agricultural land in the country.

“AgForce is supportive of new infrastructure projects and we are very keen to ensure transport costs for agricultural produce are kept down to help us maintain our export competitiveness,” he said.

“Nation-building projects like the inland rail will be good for Australia and create jobs in regional areas, but they must not compromise our best farming land like the Condamine floodplain.”

Mr Newton said AgForce wanted assurances that any infrastructure across the floodplain would not adversely affect landholders, especially with regard to overland flows.

“Any impact on water moving naturally across the floodplain is a major concern as water is very hard to predict. This infrastructure must not only be able to stand up to floods like the one in 2010, but also not cause a raft of unintended consequences,” he said.

Mr Newton said local farmers would also be concerned about access issues and the impacts on productivity and profitability.

“When farmers have their blocks dissected, how will they get large farming machinery from one side to the other? Will they have to drive 10 kilometres to safely cross the track?

“How will local landholders be compensated not just for the loss of the land, but also the overall negative impacts on their businesses?

“There are so many unanswered questions that landholders need answers to before work starts on this major project.”

The CEO of InterLinkSQ Michelle Reynolds said today’s announcement brought certainty and clarity for a way forward for businesses and stakeholders relying on the Inland Rail.

“However, we are left wondering at the reasons behind the Minister’s decision to select this route.  It is not the most cost effective or operationally efficient route; it does not increase freight volumes, and flies in the face of long term land-use planning for the Charlton Wellcamp Enterprise Area,” she said.

“The alignment that has been announced is the 2015 alignment with a deviation past Brookstead, through Pittsworth, Southbrook and the Wellcamp Airport before passing InterLinkSQ.

“I feel for the people whose properties are affected by this alignment and who have had only a matter of weeks or months notice.  I could understand this if there was a good operational or commercial reason behind the decision but I am at a loss as to the basis of the current decision.

“But the decision has been made and now we, as the freight, and in particular rail freight, industry have a massive responsibility to ensure that we get every single dollar of value out of the investment that the government is making in Inland Rail.”

Ms Reynolds said much was spoken of the benefits of Inland Rail for South-East Queensland, however, very little discussion was actually had around how two pieces of steel on the ground would bring tangible benefits to the region’s businesses, producers and economic development.

“What Inland Rail does is allow for the efficient and reduced cost movement of increasing volumes of freight.  That requires a very clear understanding of what freight moves, where it moves to and from, and determining the most appropriate means of transport given the costs and time imperatives of each type of freight,” she said.

“In particular, for South West and Western Queensland, this means the ability to move larger quantities of agricultural and processed goods to the Port of Brisbane for export.  An efficient transport network will ensure that producers retain and can improve their international cost competitiveness.  Our nation’s ability to remain competitive against developing nations and other key competitors such as South America, US and others where governments are investing heavily in transport infrastructure relies heavily on the ability to use the Inland Rail infrastructure effectively.

“Another consideration of benefits for the Inland Rail to our region is the ability to link with other regions along the route from Melbourne to Brisbane. This could, for example, open access to new markets for our producers such as the horticulture growers of the Lockyer Valley who can have produce transferred to Sydney, Melbourne, Adelaide, Darwin and Perth using Queensland’s first real access to an Interstate Rail Network since Federation.

“However, without efficient access to the rail line, such as the new Intermodal & Bulk Loading facilities currently under construction at InterLinkSQ, the Inland Rail is just two pieces of steel on the ground and long trains passing swiftly through our region.  There is no economic growth, no new jobs and more trucks on our ever-increasingly congested roads.”

Further than that, Ms Reynolds said InterLinkSQ was the only fully approved terminal currently under construction in Southern Queensland that linked both the Queensland Regional Rail networks and the Interstate (Inland Rail) network.

“Too many Queenslanders have the perception that Inland Rail is the sole solution to our rail freight woes.  For Queensland, Inland Rail provides us with a standard-gauge connection to the rest of Australia – something already enjoyed by every other State on the mainland,” she said.

“In our region we already have some of the world’s finest, most innovative and productive agricultural producers.  Right now, they have been let down by a lack of investment in the rail freight networks required to move their products to Port and through to their customers.”

Ms Reynolds said InterLinkSQ would act as a consolidation point for rail freight in the region, creating the volume critical to ensuring the service offering and pricing to provide benefits to freight users and allow them to continue to invest in their businesses, to attract new businesses and industries to the region and grow jobs for the future.

InterLinkSQ’s initial focus would be to establish a Rail Port Shuttle to increase the capacity and efficiency of moving freight to the Port of Brisbane.

A Border to Gowrie Community Consultative Committee will be established to provide feedback from landholders, businesses and residents about the decision.

In its 2017 budget, the Federal Government committed $8.4 billion to the Inland Rail project; more than half of this investment will be spent in Queensland.

The project has said it hopes to start building the tunnel which links Gowrie with the Lockyer Valley to Toowoomba’s east by 2020.